In the space-age year of 1989, Marvel's UK arm decided to have a stab at DC Thomson's racket with a couple of strange comics. One of those shall be looked at right now, and the other at some other time. This is the first one, and it's wicked - It's Wicked! 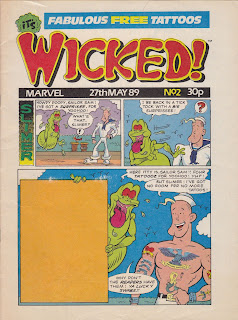 Yep, that's Slimer from The Real Ghostbusters on the cover - Marvel already had a Ghostbusters comic out, so they must've thought it'd made sense to launch a new bunch of characters off the back of this ugly little spud. The big orange square is where the free tattoos were displayed - and as I don't have the tattoos to hand, we're left with a deceptively spartan cover! The font up there's an obvious Dandy rip-off, but we'll forgive them that much. The covers for the other two issues I have are less lonesome-looking than this one: 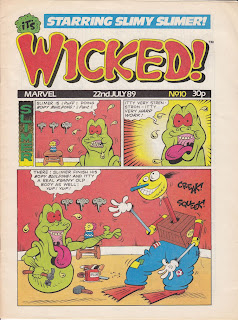 We've got Slimer's hilarious attempt at body-building on this one... 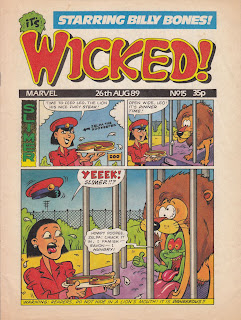 And some advice to the youngsters about not hiding inside the mouths of lions on this one. Makes sense when you think about it.

Right, let's see what's inside them!

The earlier issues start with this message from the editor, a certain Helen Stone: 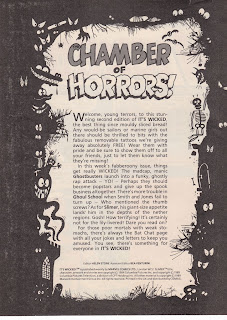 One of the words used is "fabberoony" (Student Grant must've read this comic at some point) and there's a bit of false information too - the comic's own Ghosthunters story is here referred to as Ghostbusters - so, unfortunate as it may be, we won't be seeing Peter, Ray, Egon and Winston rapping within these pages. The border surrounding the text is fantastic, mind - one of the highlights of the comic!

The first of the "regular characters" to feature is Gordon Gremlin, who tells us a poem about his favourite things: 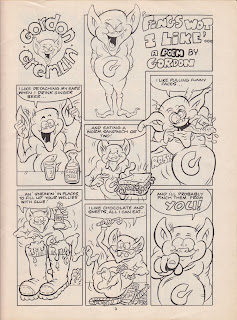 His face in the title panel has a certain bit-of-the-Baxendale about it, but for the most this looks like it was done by... someone or other. Looks vaguely recognisable anyway. It's a cute enough little character, and certainly more likeable than some of the others that It's Wicked! features.

Oh hey - John Geering's here! He has at least two stories in the comic, the better of those being Ghostman Bat and his Black and White Rat, about a part-bat, part-human thing who delivers ghosts to folk. 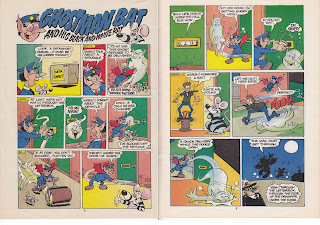 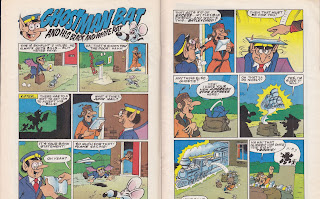 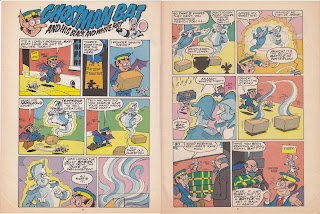 Mostly fun, but there's a bit of sloppy editing on these strips - see if you can spot the mis-attributed speech bubble, or the panel which has nothing happening but some swirling mist and no text.

Ghostman Bat also deals with the fan mail, via the Bat Chat page: 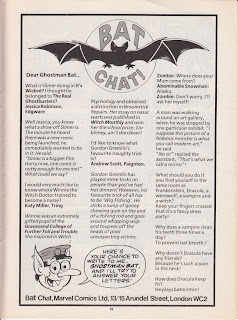 The other Geering thing is Were Woof, which is sort of alright, but without much in the way of a punchline: 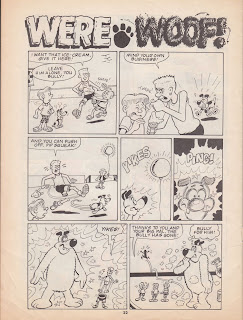 Next we have Dunstable D. Dragon, which is by someone called Nick Miller, who did VERY funny things for other comics such as Acne and Fizog. This one's nice looking, but not very entertaining. 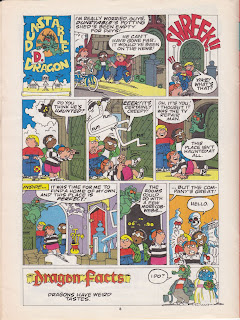 Clare Voyant is an odd one - a long set-up for a joke that the intended audience probably wouldn't get. Gave me a slight smile. 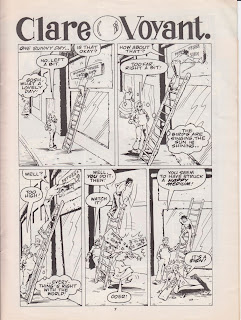 Oh, and Barrie Appleby's in it too! Here's his Winnie the Witch Doctor, who helps sick witches, obviously: 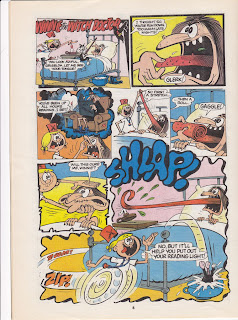 Mummy's Boy is one of the most unlikeable comic characters since... Mummy's Boy from Monster Fun, oddly enough! A cowardly mummy who accuses his cousin of being bad luck for no reason, who then assaults said cousin with a big spiky mace. The prick. 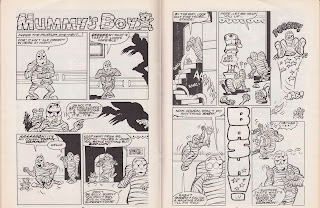 Slimer gets his own story on the inside. He speaks in a really annoying way, but at least this story has him encountering a wonderful mechanical man: 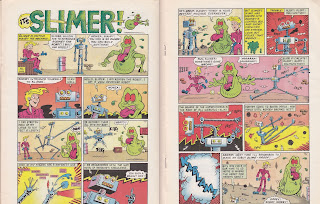 It's Wicked features not one, but TWO strips based around a school full of monsters. First there's the okay-ish Ghoul School: 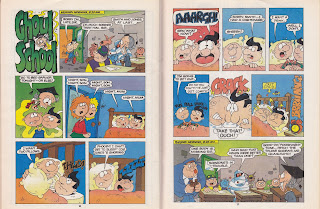 And then there's the superior Nursery Nightmares! with some hilarious faces: 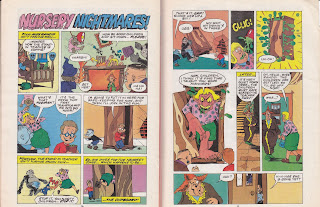 Sure I've seen similar drawings elsewhere... A bit of research is needed perhaps. It's nice that Marvel aped DC Thomson's style to the extent of not crediting the artists, but twenty-three years later it's a tad frustrating. I'll have to read some more comics, oh woe is me!

Toad in the Hole is amongst my favourites of what It's Wicked! has to offer, even though it feels completely out of place. It's more like a one-shot space-filler in 2000AD than something you'd expect to see in a juvenile humour title, but it's great all the same. Of these three, the second one's the best: 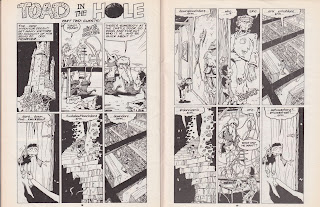 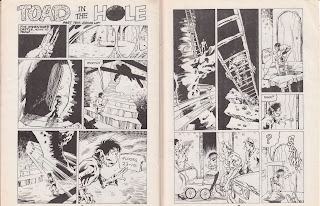 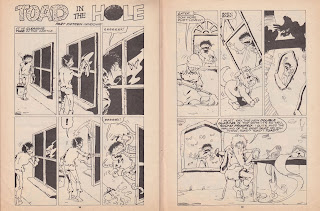 By contrast, Billy Bones is just despicable - I'm not sure why, but I've never felt such ambivalence toward a comic character. Could be his lack of personality, his lack of adventures, his lack of flesh or his crap friends. Could even be something else entirely. Here he is anyway: 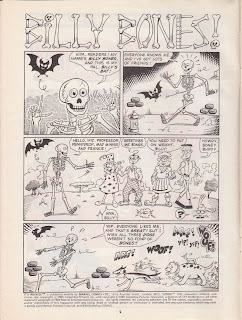 Also featured is The Daily Howl by Mychailo Kazybrid (he managed to hide a signature on the page, good one!). He mostly does stuff about Wallace & Gromit nowadays, but in 1989 he did this thing about a newspaper run by monsters. I'd like to see where this goes, but eBay's not offering many affordable It's Wicked comics as I'm writing this (£10 each?? Get lost!). Here it is anyway: 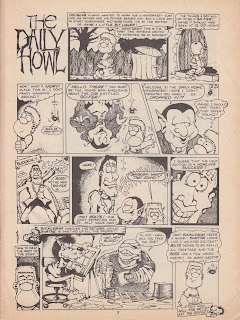 Last up, my favourite - Ghosthunters! Not sure who it's by (some of the faces look a TINY bit like they were done by Jimmy Glen), but it's mad. It's got a Beastie Boys parody, fourth-wall breaking (the characters take a shortcut by jumping across the frames of the comic), and some ridiculously smile-inducing monsters (the Were-Peas being of particular note!). Good old daft silliness. Have a look at these: 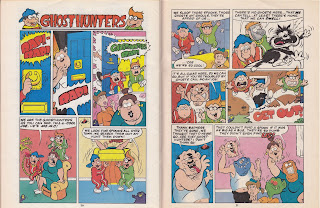 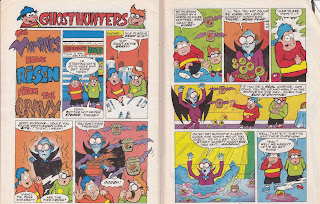 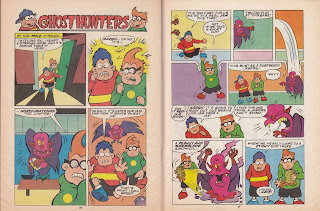 Overall? Not bad at all! Not exactly "wicked", but Ghosthunters and Toad in the Hole are enough to make me want to see more. As an alternative to Buster and the Beano, and as a "tribute" of sorts to earlier horror-themed funny comics like Monster Fun and Shiver & Shake, it works. Shame that only 17 issues were ever published.
Posted by TwoHeadedBoy at 9/27/2012 10:39:00 pm