It's a lazy way of doing things, but at least we all get to watch some cartoons, right?

Falling Hare (1943) - Bob Clampett
My all-time favourite Bugs Bunny - and a rarity in that he gets VERY CLOSE to not actually "winning" in this one.

Tortoise Wins By A Hare (1946) - Bob Clampett
Bugs as the villain! And he actually loses in this one too. Look out for the globs of carrot flying out of his mouth when he gets angry, great stuff. 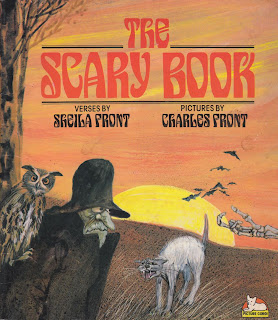 Well, as book titles go, you can't get more obvious than that, can you? Published in 1985, and purchased in 1990 (I remember getting the teacher to read it to the class, somehow), it's a book of short poems/verses (there's really no difference - it's only poetry snobs who refer to poems they don't like as verses, apparantly) by Sheila Front, each accompanied by wonderfully smudgy illustrations by Charles Front (either a couple, or siblings, or coincidentally named creative partners - I don't know).

Before beginning - what a cover! Seems more "sinister" than "scary" - the fate of the pale-faced hat-wearer and his pet owl is never revealed. What that skeleton is beckoning him t'wards, or what the cat is so antsy about, we'll never know... But at least the book's survived long enough for the rest of us to see.

The title page is a good one: 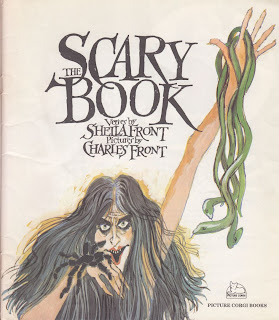 A mad woman with a big nose, possibly naked under that hair, with a handful of snakes and a nice big tarantula. Again, like the miserable thing on the cover, this woman makes no further appearances in the book - which as you'll see covers a huge amount of things that could possibly be the worst nightmare of at least some kids. YOU HAVE BEEN WARNED (scary music to listen to whilst looking at it)
Read more »
Posted by TwoHeadedBoy at 7/26/2012 12:56:00 am 4 comments:

Alright? This is going to be the "main theme" of this blog, mostly - books that I have that don't really have a noticeable presence on the Internet, uploaded for all to enjoy. Only "good" books though, not just any old nonsense. I'm sure there's people out there who'd love to see scans of Roy McLeavy's Hovercraft and Hydrofoils [Blandford Colour Series], but they'll have to go to a hovercraft-based blog for that (actually, it's a cracking book - it'll be here eventually, but it's at the bottom of the pile). Nah, mostly it'll be books of the imagination-stirring variety. Plus some other stuff, like the usual bloggish things you'd expect (lists, moans, YouTube links and the like). Anyway, you've already had your Trap Door Dungeon, this is your next one, with a similar "dungeon" theme: The Ten Doors of DOOOOOOOOOOOOOMM.

It's all well and good me sitting here saying "Yep, I've got a blog now!", but it's a bit pointless if nothing's happening on it. So, as a bit of a kick-start (perhaps to get things rolling a bit?), here's The Trap Door Dungeon, in its entirity.

Now then, Trap Door. A series of forty 5-minute stop-motion cartoons about Berk the blue monster, who cheerfully carries out the daily tasks set for him by the Thing Upstairs - mostly being hindered in some way by whatever beasties emerge from the titular Trap Door in the middle of his dungeon/kitchen home. It's been on TV continuously in some form or other since 1984, and almost every episode is on YouTube (as well as all 40 episodes being available on DVD), so there's really no excuse to NOT know anything about Trap Door. 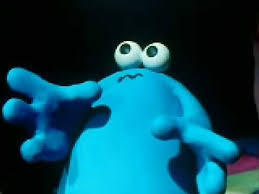 For those that for some reason DON'T know anything about the greatest television show of all time, Bogleech has done more-or-less the best article on the entire Internet about it. And he's an American! So the rest of us have no excuse really... BUT, his geographical handicap means that he doesn't have as easy access to Trap Door merchandise, ho ho! That's where hoarders such as myself come in.


Carry on by clicking on the jump...

It's mostly made up as I go along, but there's some semi-interesting things on the way, really!


-Scans of various otherwise forgotten comics
-Scans of interesting books
-Scans! Lots of scans!
-An excrutiatingly tedious countdown of my 250 most favourite games ever
-Another countdown of the 100 best toys ever (should be more fun than the one Channel 4 did a couple of years ago)
-More scans
-Stuff about films, maybe?
-Things about axolotl (and figuring out the plural term for "axolotl")
-And stuff about things that used to be on telly but aren't anymore
-Lists relating to the natural world around us
-Drawings what I've done
-Shockingly offensive ideas and opinions, maybe
-Mostly good spelling and punctuation
-Recipes
-All the usual stuff you'd expect from a Mickey Mouse operation like this one
-Scans 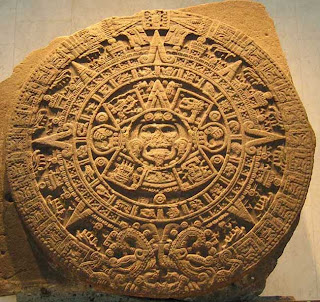 Just filling a bit of space...

Looking at all these things over the years has told me that if in doubt or otherwise pushed for time, just post a load of cartoons from YouTube.


Book Revue (1946), by Bob Clampett. Watch our for his crazy scatting (if you haven't seen it already).

Scrap Happy Daffy (1943), by Frank Tashlin. Wartime propaganda at its finest, with a Nazi goat and a whole mess of Messerschmitts.

The Daffy Doc (1938), Robert Clampett. In which Porky is tortured, again.

Daffy Duck Hunt (1949), by Robert McKimson. Porky's a bit more aggressive here, threatening his poor dog with an axe - Daffy uses this and runs with it, obviously.

The Impatient Patient (1942), by Norm McCabe. In which Daffy visits Dr. Jekyll with a view to getting a cure for his hiccups.

Sorry about that, something a bit more "thorough" will follow this - just I wanted to get a bit more on the page before "settling down" - makes sense, a bit, right?

Well, it's taken a couple of years of doing nothing and a fair bit of research (ie: asking a couple of questions on one forum), but here we go. It was viewing this nice little animated piece this evening that finally made me pull my thumb out:

That's a short and somewhat depressing (but ultimately inspiring) monologue from Bruce Woodside, an animator who's worked on Ghostbusters, Space Jam, Lord of the Rings (the Bakshi version), Animalympics, the New Adventures of Mighty Mouse and so on. It's a bit of a demo reel too (bonus!), but it DOES remind you that at any moment in time, you can and will die a horrible, horrible death. And time goes really quickly, all of the time.


So, whilst a blog's just a blog, and there's millions of them out there, they all mean something to the people that are "doing" them, even if they only have a couple of readers (or none at all). So with that, here's my own space to go on and on about stuff. And if I should suddenly be crushed by a poorly-erected set of shelves, or have my head squashed between two train buffers, at least I'll've FINALLY gotten around to "doing a blog".