Everyone else is doing it, so why shouldn't I? There's been fifty weeks for "good stuff" to get made so far this year, and traditionally (or around mid-October if you want), now's the time to do a "round-up" of "what's best" in the form of several lists.

Slight problem though - I don't really pay attention. There's been six visits to the cinema this year, and that's not enough for a Top Ten. Can't really do a Top Five out of that lot either, because I really enjoyed each of those six films.

Outside of a couple of compilations of 1950's music, no albums have been listened to this year. There've been approximately two new songs that I've enjoyed, and the only new game I've bought this year is Soul Calibur V (can't really make a list with one item in it).

HOWEVER... There is ONE thing I've given my full attention to this year: 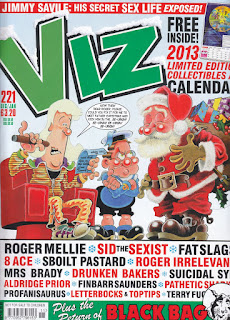 Yeah, Viz! That's the current Xmas issue there, go and buy it if you haven't already. I've been buying it semi-regularly since 1999, but 2012 has been the first year without missing an issue. With those qualifications, I feel entirely justified in doing a countdown of the "Top Nineteen Viz Strips Of 2012".

Oh, and it's NSFW, obviously.

One of those throwaway things usually tucked under the Letterbocks. The simplicity of this one really worked for me (and it wouldn't've been out of place in the late Dandy's final incarnation). 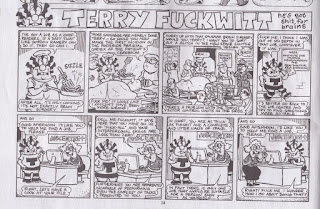 Can the poor sod help being so permanently confused when the world he lives in has such jobs on offer as a career in the NASA Institute for Sausage Neurosurgery and Aeronautical Engineering? 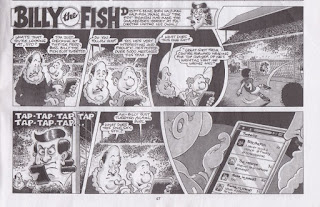 Letting a goal in because he was Tweeting - the referee and the crowd have all Twat as well. It may as well be happening in real life. 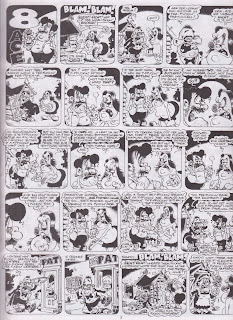 Ace has been watching Downton Abbey apparently, as he's employed staff for his shed. It's his wife's reactions to it all that had me chuckling to this one. 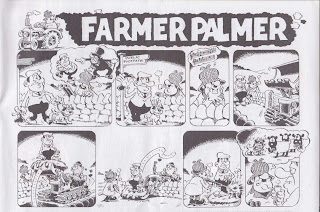 Simon Thorp did a huge double-page spread (one for the Profanisaurus there) at some point this year - it was Farmer Palmer's free festival, a big mad Glastonbury pastiche, essentially. £50 to park your car, £100 to get it out of the mud, that sort of thing. Anyway, it was impossible to scan, so here we are with a shorter Farmer Palmer strip - his formula's become so formulaic that words aren't even required anymore. Even the ex-dog owner's seen it all before.

No.14 - Cardinal Padraig O'Lourde, the Archbishop of Edinburgh 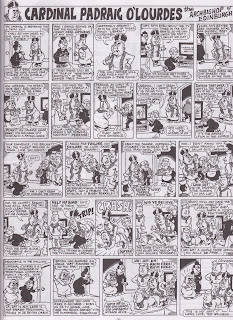 Classic David Jones stuff - take a public figure and one of their notable attributes, and spin an 'Ello 'Ello style situation out of it. Makes folk laugh! 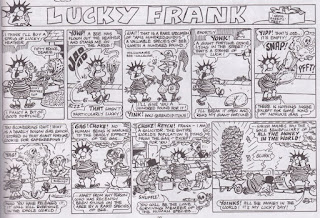 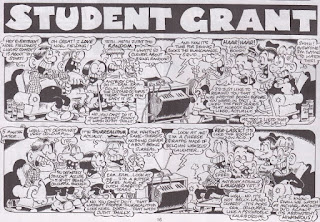 The whole "idiot comedy" thing's getting out of hand these days - at least Viz will always be there to reassure us that comedy hasn't gone completely to shit.

Constantly paranoid and living in a fantasy world, here's one of those rare occassions where Vern's reservations ring true - sort of. 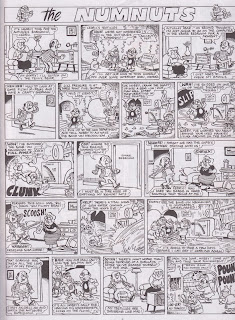 I'll always enjoy "little-people-operating-the-human-body"-type comics (Lew Stringer did a good round-up of them back in April), so combine that theme with David Jones, and the results are a guarenteed success. 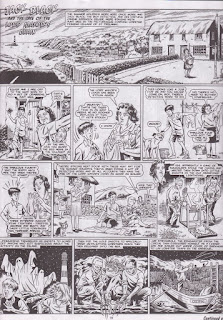 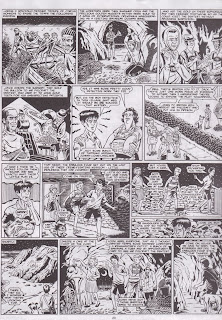 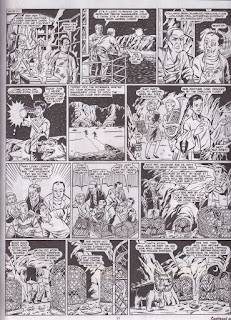 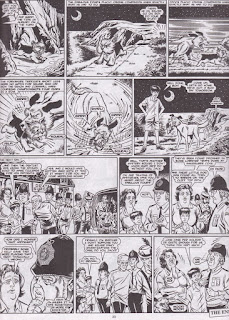 There's always been an evil streak within the young boy detective (well, not so much a streak as a full bodysuit), but to my knowledge this is the first time his actions have lead directly to the deaths of his adversaries (as in, without PC Brown executing them). And here, with those "adversaries" being a cute little trio of kids and their Yorkshire terrier... Comedy at its blackest.

No.8 - The Modern Parents 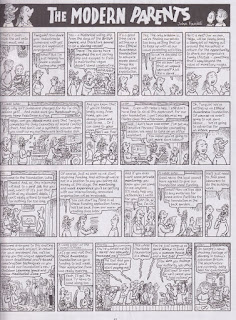 John Fardell only did the one page this year, but it didn't disappoint - Malcolm and Cressida at their most shallow and hypocritical, whilst also showing more of their often-hinted-at predatory side.

Mr. Smutt'll try anything, and he sometimes even manages to convince someone to go out with him, such as in this particular adventure. He deals with the situation in his usual sensitive, tactful way (I'm thinking he'd make for a good contestant on Come Dine With Me - "Bords love a chef, man!"). 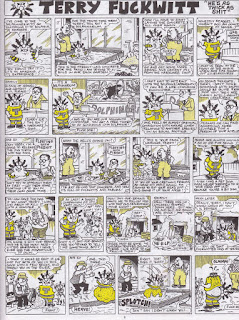 One of the only things funnier than when Terry finds himself in confusing situations is when other people get caught up in them too - it's as if his idiocy is contagious.

No.5 - The Pathetic Sharks

From what I can tell, this is only the second time since their original appearance back in the 1980s when one of the sharks has actually killed someone in a shark-like manner - "Eurgh! I can't believe I bit that man in two. I can still taste it. Has anyone got any mints?"

No.4 - Sir Mervyn King - Faeces-related Fun with the Governor of the Bank of England 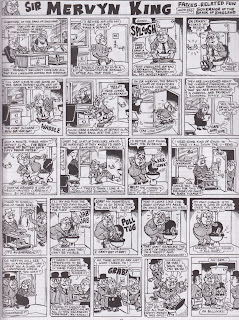 Another ridiculous setup with and embarrassing pay-off from Mr. Jones. Think I've read this one over a dozen times and still get a laugh out of it.

No.3 - Roger Mellie, the Man on the Telly

When BBC Radio Four's James Naughtie "misprounounced" Jeremy Hunt's name back in December 2010 (that long ago??), it took a while for Roger Mellie to make the same "mistake". But when he finally did, he did it beautifully. 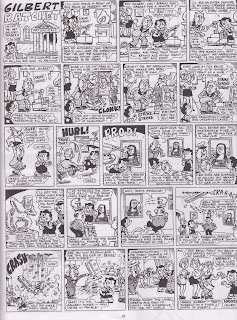 No single moment in Viz this year has had me laughing out loud as much as those eyes on the Mona Lisa, following around the giant magnet attached to the museum curator's hat. Add the "Art Appreciation Noise Maker" machine to it and it's another winner. 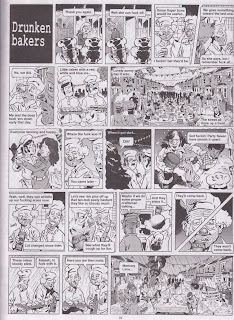 Barney Farmer and Lee Healey's Drunken Bakers has been my favourite Viz thing for a good few years now. A massive contrast to the rest of the comic, it's a sobering read (ooh!), as you can see there's no chance of things ever getting better for the pair. Over the years, their previous, pre-alcoholism lives have been hinted at, and here we see that the taller, balder baker wasn't always as nihilistic as his younger companion. The rest of the world has seemingly declined at the same rate as the bakers have, as can be seen in the final panel - this page deserves AWARDS.

And... That was 2012, at least in terms of Viz. If you've never read it before, or if you stopped reading it a long time ago, hopefully the above examples will get you reading again - it really IS the best thing on the shelves, and yes, it really IS as funny as it used to be.
Posted by TwoHeadedBoy at 12/12/2012 02:45:00 am