When Telly Was Good, Part 1

A long, long time ago, before everyone had YouTube or 700 channels, there was only four channels to choose from for entertainment, education, information or whatever. Also, if you just stuck a camera in front of a celebrity and filmed them planning a wedding or something, that didn't count as a TV show. No, back then, EFFORT had to be made for television stuff. There was still guff, obviously, but a few times a year, whole "theme nights" would be given over to a particular theme. 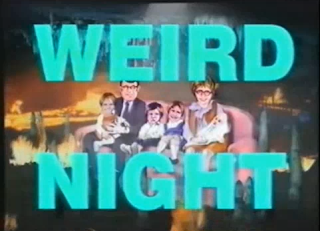 Weird Night, a whole evening's worth of brand new, specially-commissioned programming focusing on strangeness, alternately presented by Roger Corman and a giant talking baby's head. Beginning with a round-up of the year's strange news (narrated by Tom Conti), there was also a series of talking-head bits of people recounting odd incidents that had befell them, a documentary on America's last travelling freak show, an episode of The X-Files, a short film concerning urban legends, a panel discussion within the Ripley's Believe It Or Not! Museum in Blackpool (featuring Bob Rickard of Fortean Times, amongst other people), and then "weird movies" until dawn.

And here's one of the few good things about modern media - YouTube means that we can watch the GOOD TELLY, again! Some kind-hearted soul out there has uploaded Weird Night in its entirity (minus the X-Files episode and the "weird movies"). And through the magic of playlist-embedding, here's Weird Night, all three hours and ten minutes of it.

So go on, cook yourself a big shepherd's pie, grab an extra large mug of tea and a bag of Liquorice Allsorts and settle down for an evening's viewing of GOOD TELLY: