Little Dracula at the Seaside

Inspired/influenced somewhat by a post over at Green Plastic Squirt Gun, and because it's still Summer (sort of - the Sun's out at least!), AND because some other blogs have already started their Hallowe'en countdowns... Well for lots of reasons really. Here's a book in which the Dracula family have a day out in Blackpool. 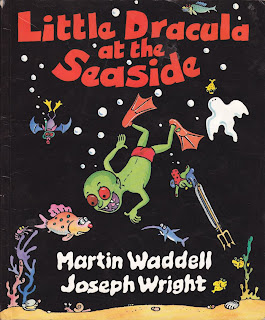 This one's from 1987 and has been read daily ever since then, so you'll have to excuse the odd scuff. At least all that reading's flattened the spine enough to get some good scans, yes!


Like every Little Dracula book (well, like the other one that I have), this starts off with a picture of Castle Dracula, which introduces us to the characters within: 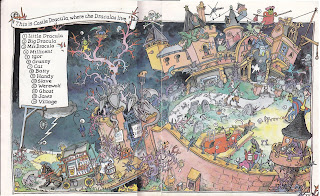 As with everything ever drawn by Joseph Wright, you can spend ages looking at these pictures and find new and amusing things each time. I'll be listing a few for each picture, but it's best to just stare at each one for approximately one hour of your day. Examples of fun in this picture include the postman's head on a spike, the gargoyle's bit of toast, the milkman's neck protector, the moat monsters, and the friendly frog offering an apple to the horse.

And now, we shall begin the story: 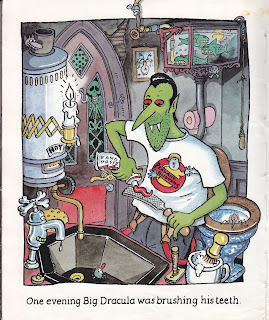 Coffin-shaped sink, piranha in the cistern, Dracula's Peasant Busters T-shirt... What a bathroom. 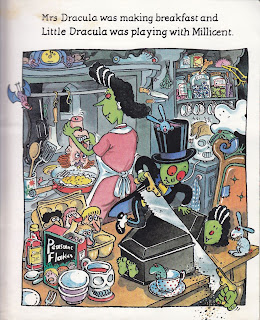 Fried brains for breakfast? Or perhaps some Peasant Flakes with a side of Blood Clot? Or even a jar of Pink Bits? 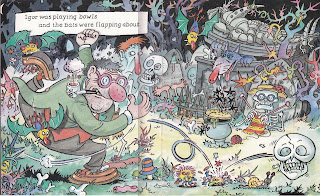 In the short-lived and shitty cartoon that Fox Kids made a few years after the books reached the USA, Igor was made out to be a mad scientist, and Slave was given a name ("Deadwood") and was promoted to lab assistant. In the books, he's a malnourished slave, grimly accepting his lot in life. 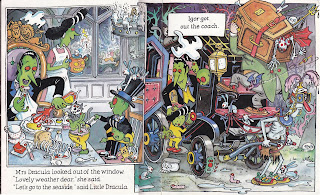 That "lot in life" involves being used as a horse. At least he gets running shoes. Look at how his head's bandaged up after being struck by lightning, ha ha! Also see Millicent's anger at her older brother - not that he's cut her in half and is sticking her legs on backwards, but rather at the fact that her foot's in her bowl of Peasant Flakes. 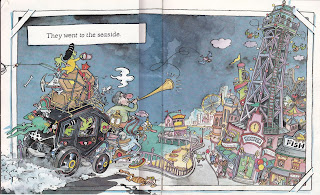 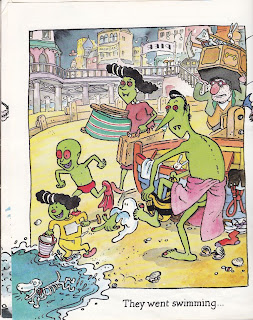 Even the oysters are scared of them! Look in the background - Slave's collapsed after his journey, feet in the air. 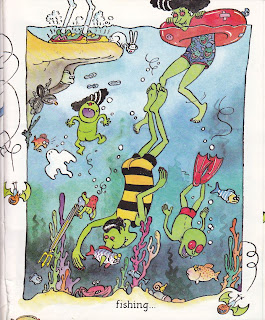 Notice the rabbits from the magic kit that Little Dracula was playing with at the breakfast table are still hanging around? As are the bats from Igor and Slave's game of bowls? 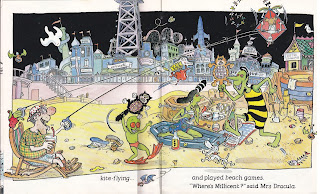 Look at those badminton racquets - or should I say CATminton. Ho ho.They also seem to've murdered and buried the man who rents our deck chairs. And see that pirate ship-shaped building in the background? Seems like an obvious reference to Blackpool's Coral Island, from here. 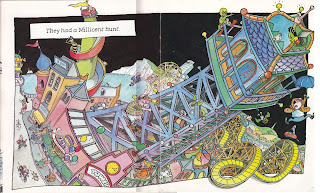 Hey, drama! The baby's gone missing! Here's what's great about books like this - no words are needed to explain that Millicent was found. As long as the reader can see her hiding in this scene, that's good enough. By the next page the family have gotten back to their fun. 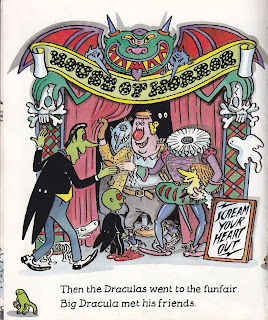 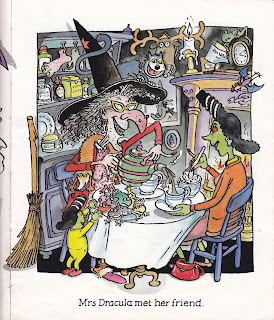 Fun for the boys and fun for the girls. From these scenes we can guess that the ghost that hangs around with the family, as well as the disembodied hand, are both males, whilst their pet bat is a female. How about that box of Worm Ears on the shelf, eh? Or the jar of Scum? 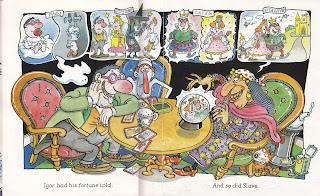 Here's a strange scene - seems like Igor and Slave have a Mr. Burns & Smithers or a Lenny & Carl sort of relationship. At least all will be well for the servants one day. I'm not too familiar with tarot cards, but I see one on the table there representing "The Snail" - maybe suggesting a slow start in life? Mystical foo-fah. 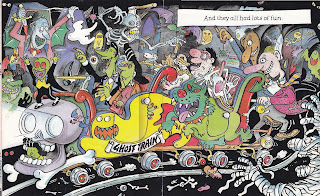 The best page in the whole book, available in extra-large wallpaper size too! SEE: The rat sliced in half by the train; the skeleton taking one of Igor's chips, the hanging foot; the weird two-headed goon who seems to be driving the train... All this, and Slave's terrified of the tiny spider being hung above his head! 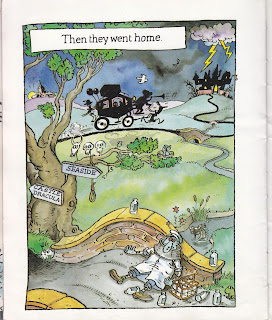 Even with the neck protector, the Draculas still managed to drain the life-force from that crafty milkman, ho ho! AND they stole all the blood he'd be delivering anyway. At least the horse is alright. 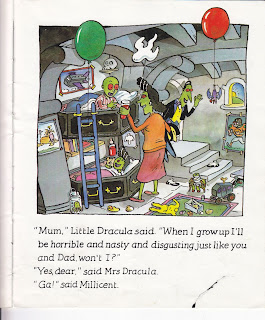 Ahh, what a sweet ending. The box of shells and the octopus in a jar, they're still just the same as any other small child who's had a fun day out at the seaside. See that picture of a dog on the wall? That's a picture of the scruffy, accident-prone Afghan Hound puppy called What-A-Mess, the subject of a series of books by Frank Muir, also illustrated by... Joseph Wright! That's nice.

Are there any books for children being published today with this amount of fun to be found in their illustrations? I'd like to see them if there are any. Here's the back cover too, where the fun continues briefly: 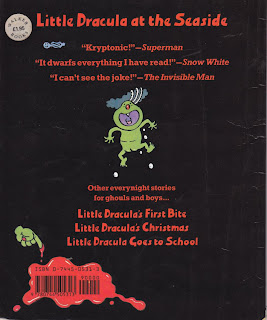