Didn't have time to scan this lot this morning, what with having a job and so on, but they're here now - some more favourites from the pen of the dearly departed Jim Petrie... Beginning with an episode of the Sparky People, from the 1980 (or 1979, that's how annuals work) Sparky book: 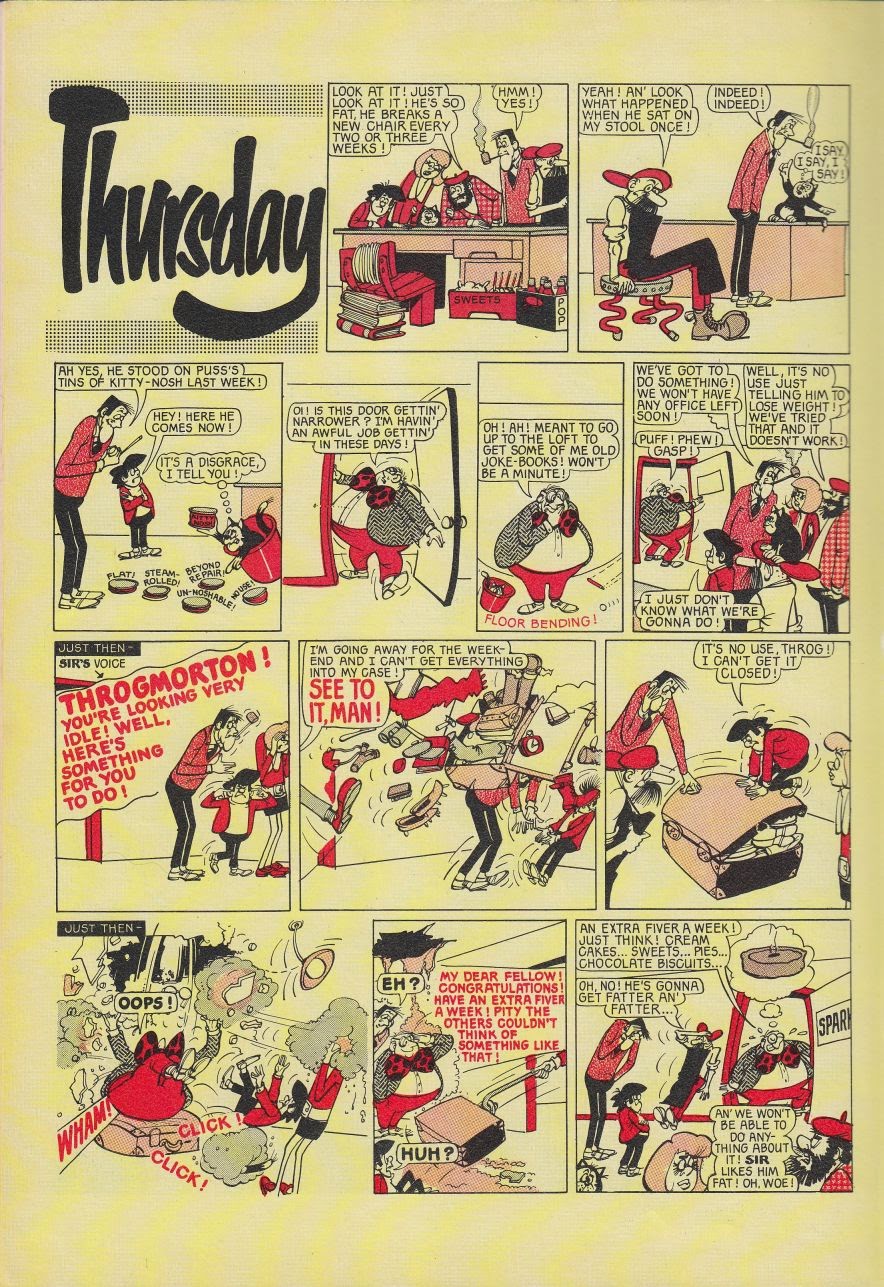 A Minnie classic now, from the 1990 Beano book (the first Beano annual I ever got) - this one even got animated for the Beano Video back in 1993 (which I assumed would be on YouTube in full, but isn't, shockingly enough). 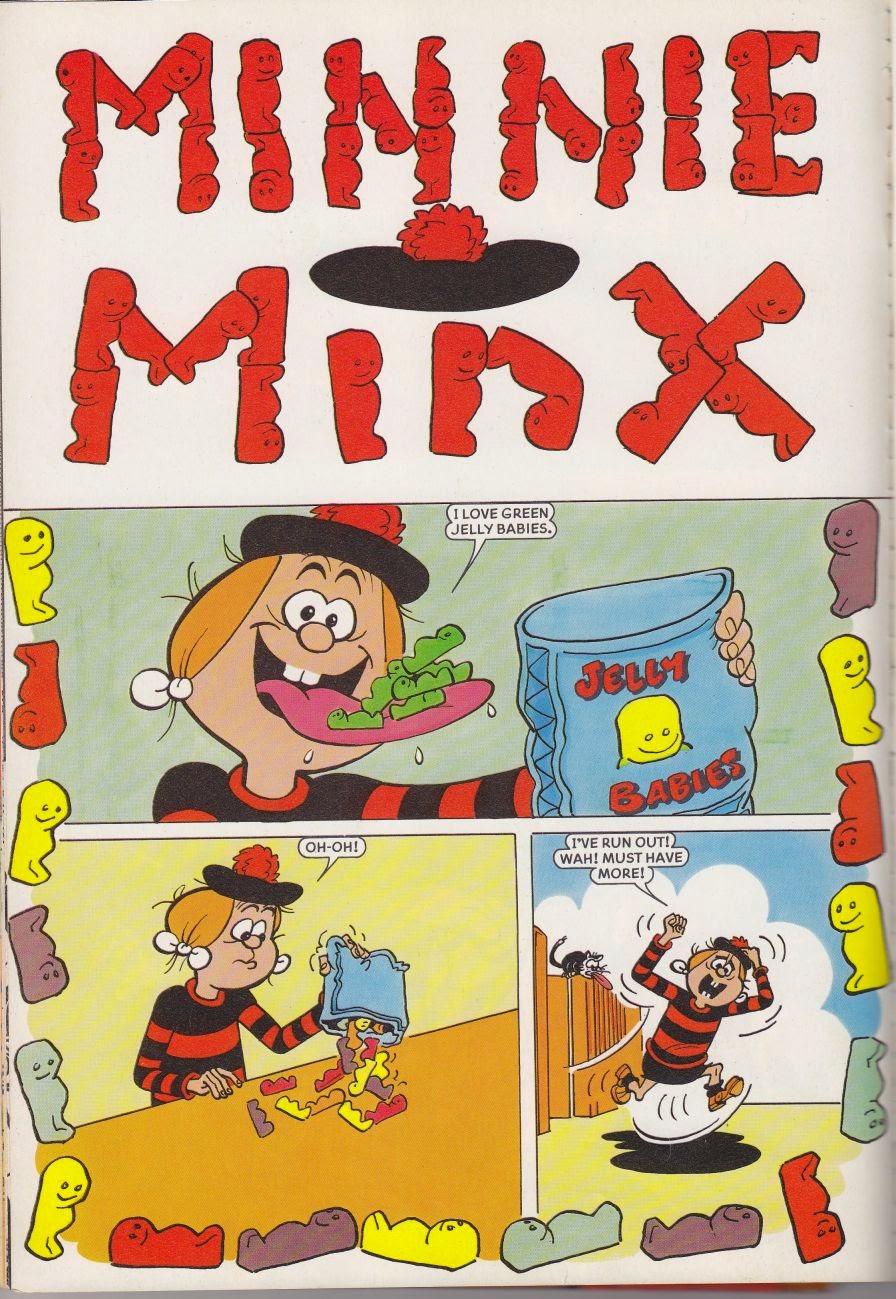 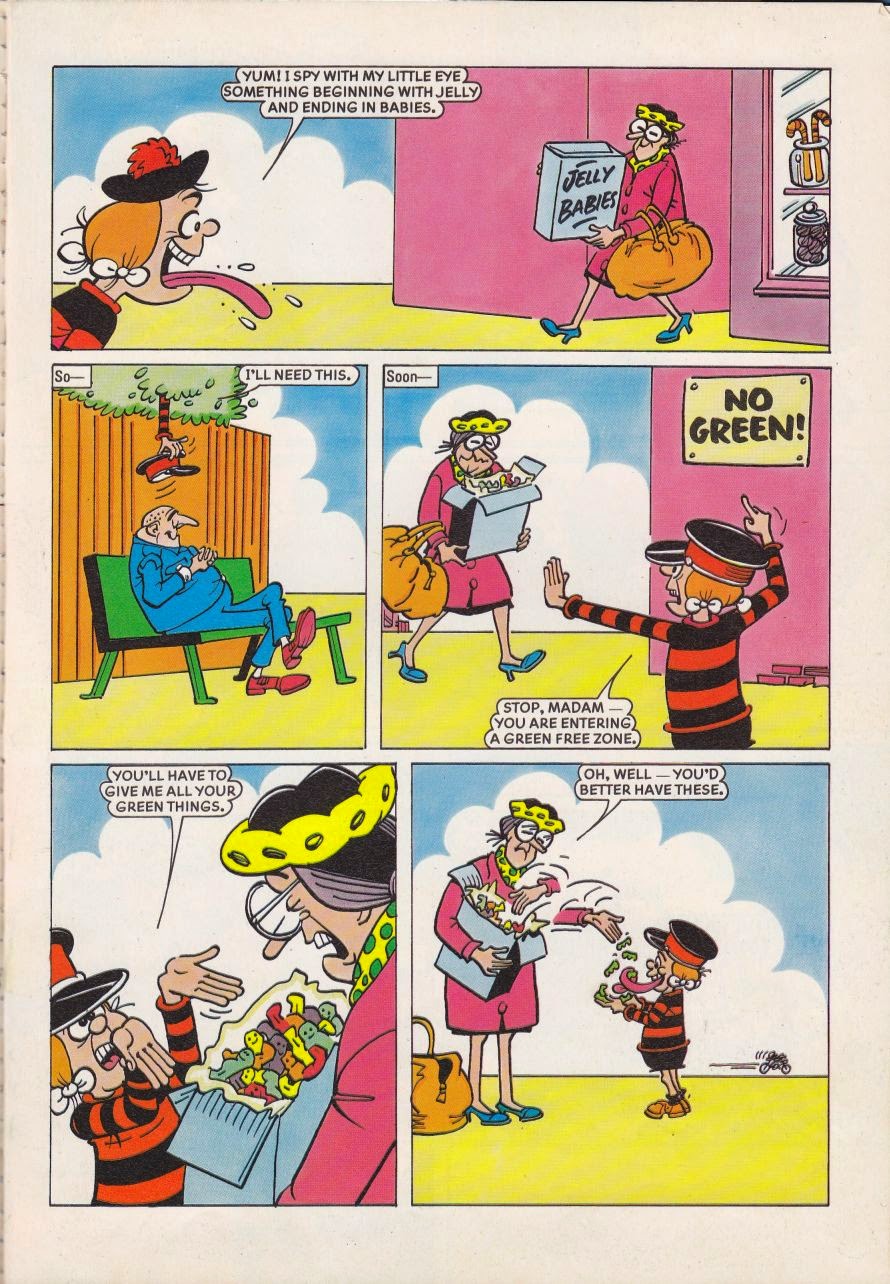 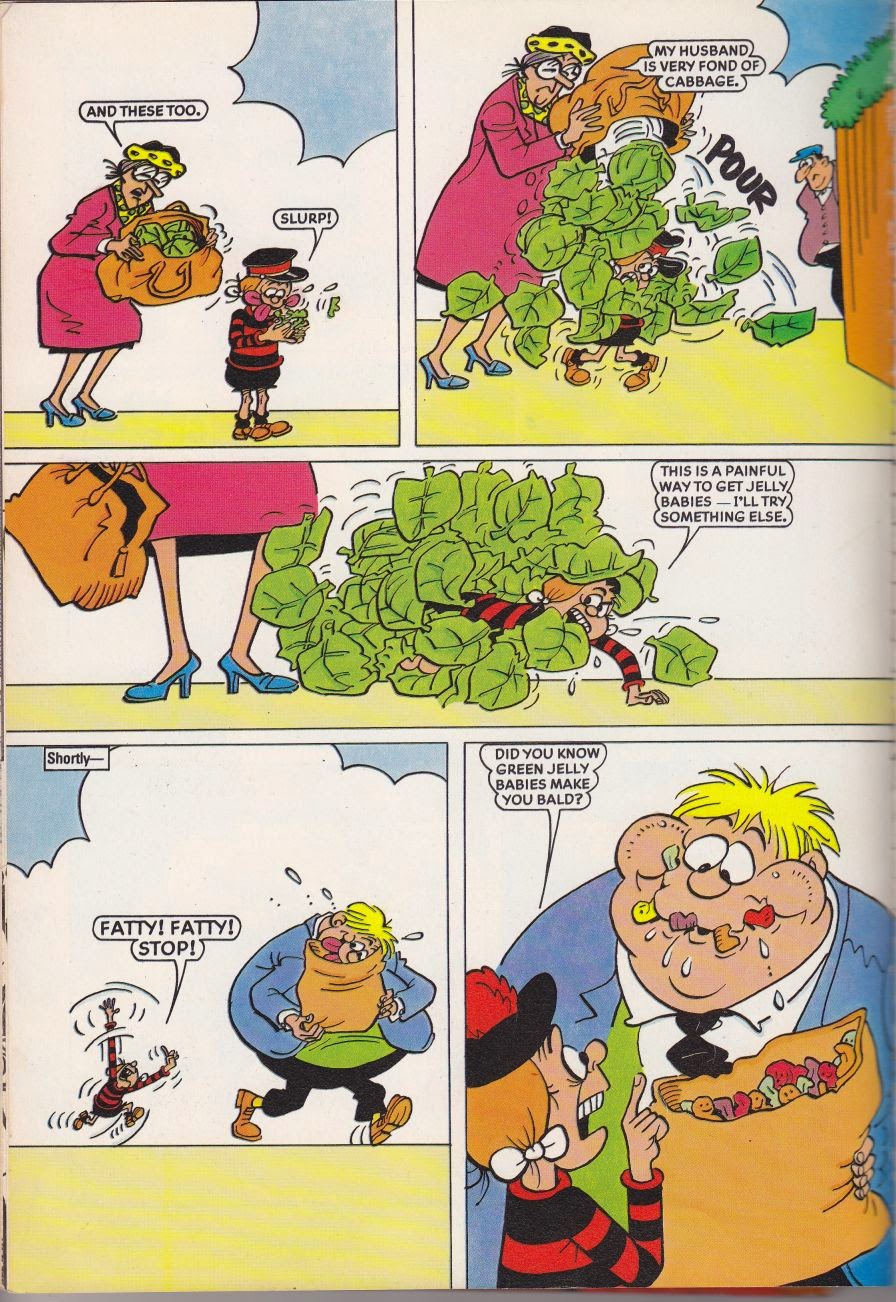 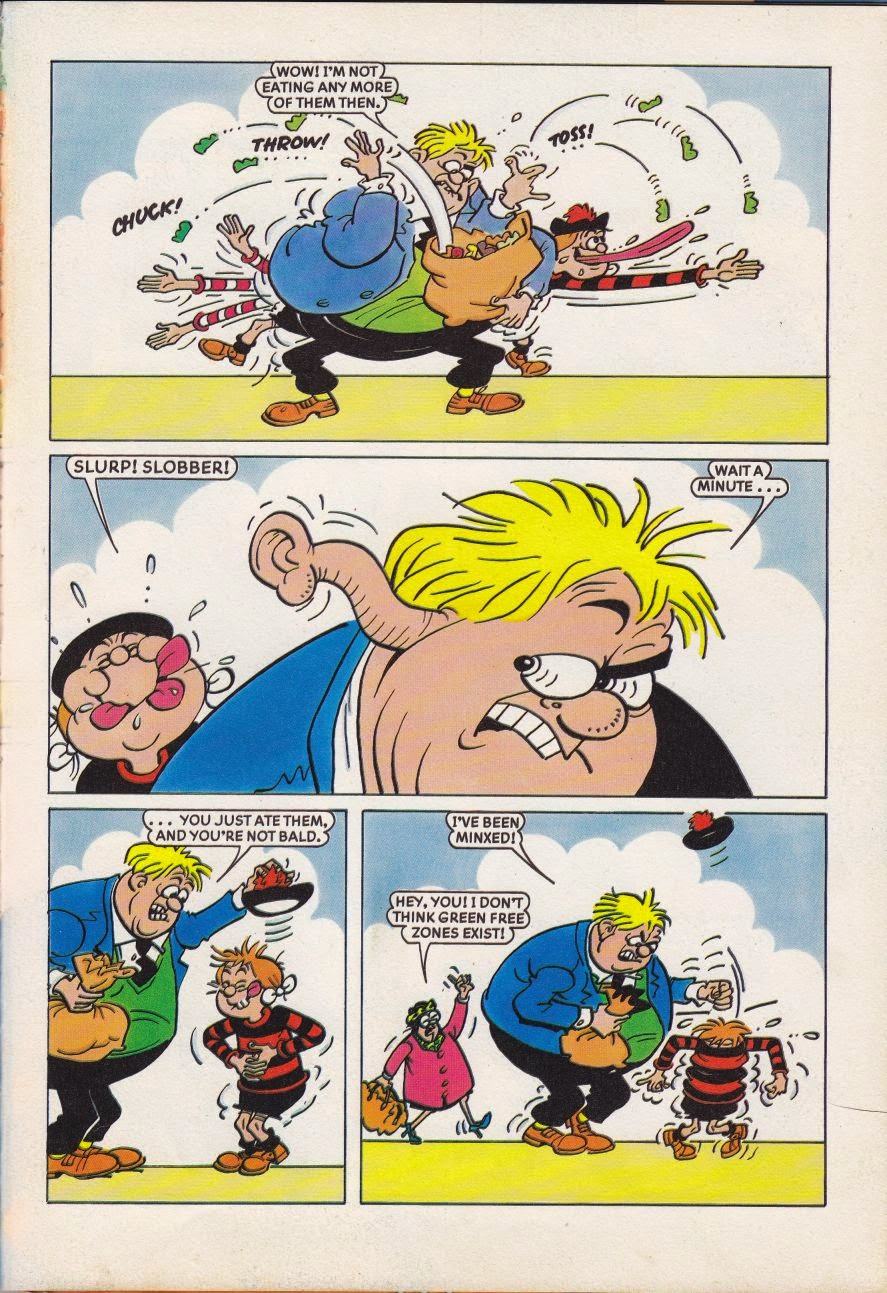 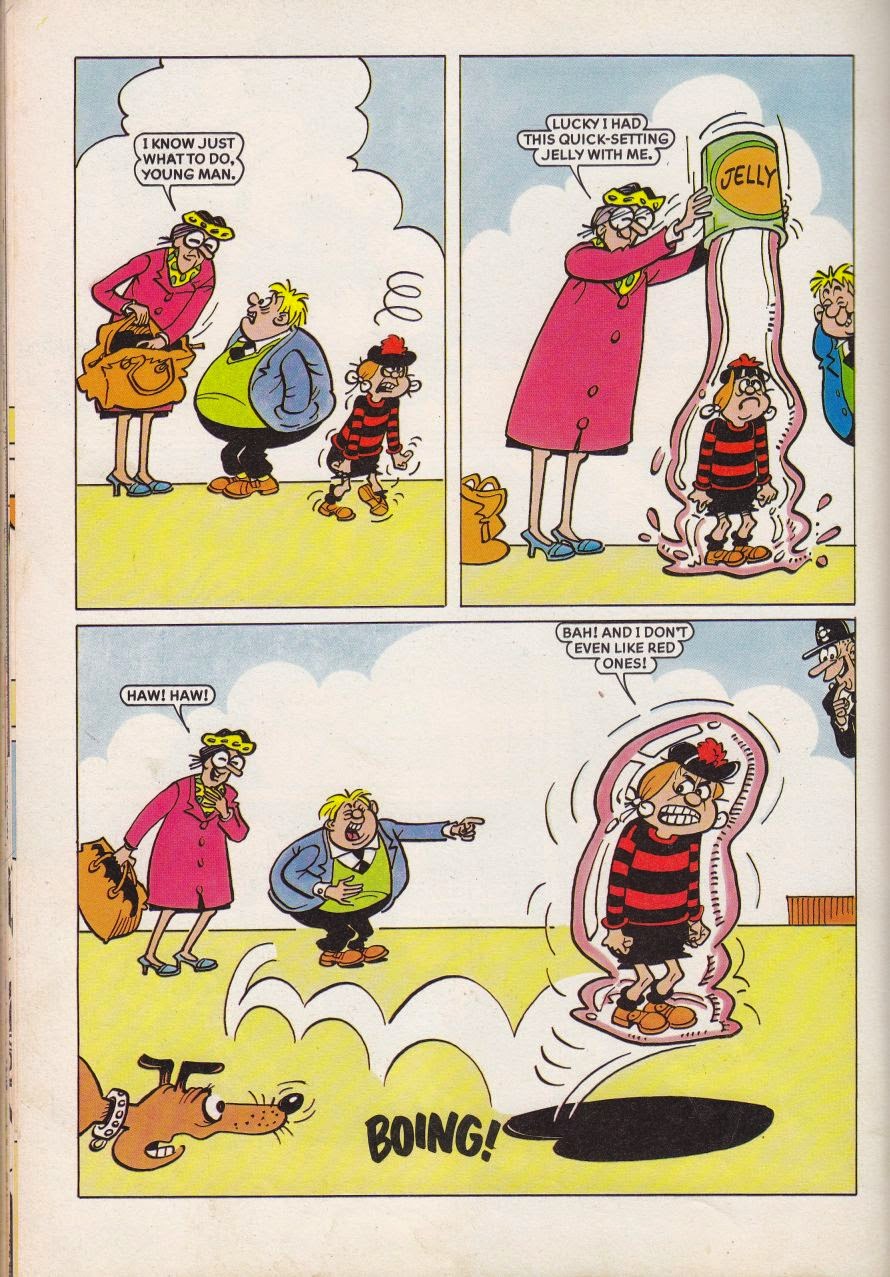 And lastly, a couple of oddities from the 1993 Topper annual - the early 1990s (and especially the later part of that decade) were VERY interesting with regards to the Beezer and the Topper - in that the artists were free to do pretty much whatever they wanted, which is how we ended up with Jim giving us this colourful character: 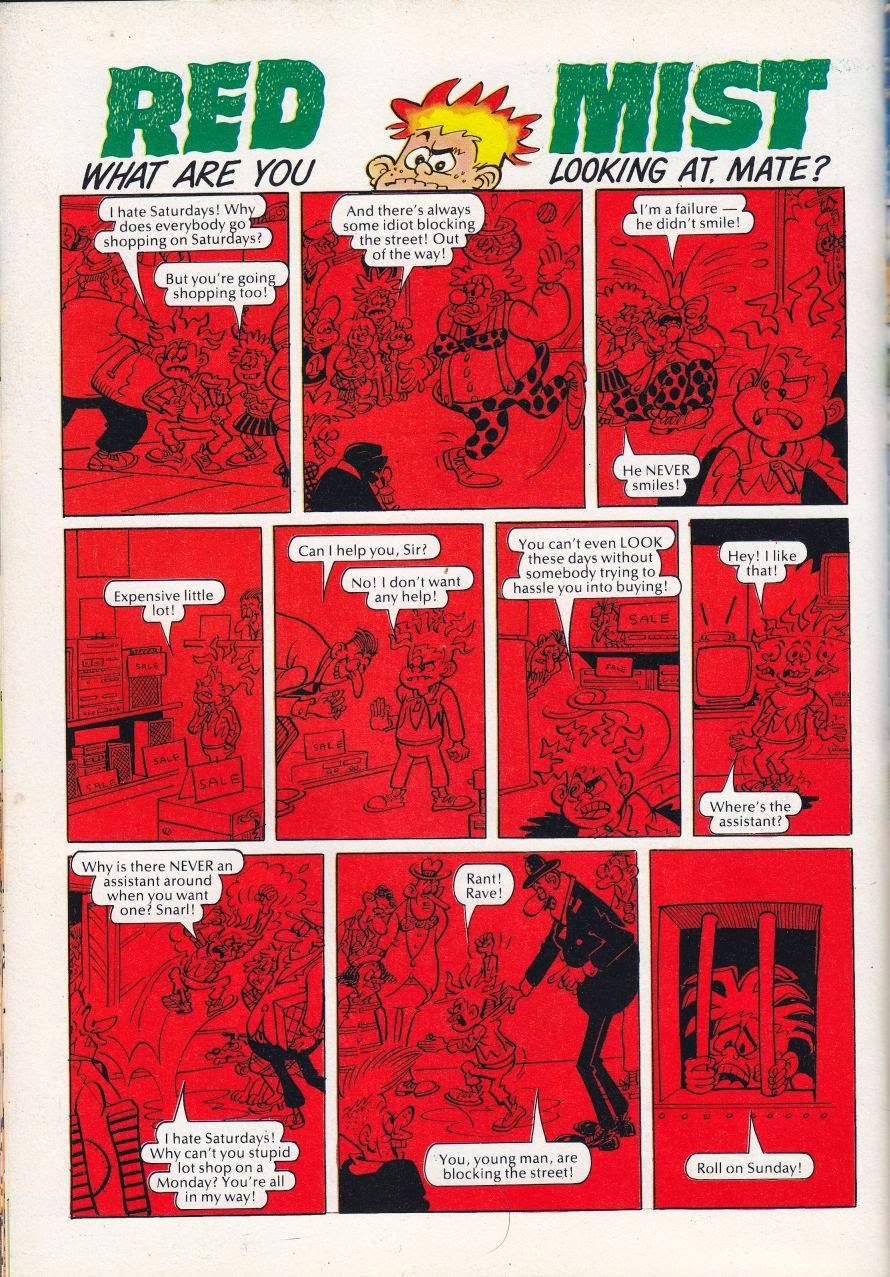 And this absurdity of nature - must've read this one over a hundred times when I was a youngster: 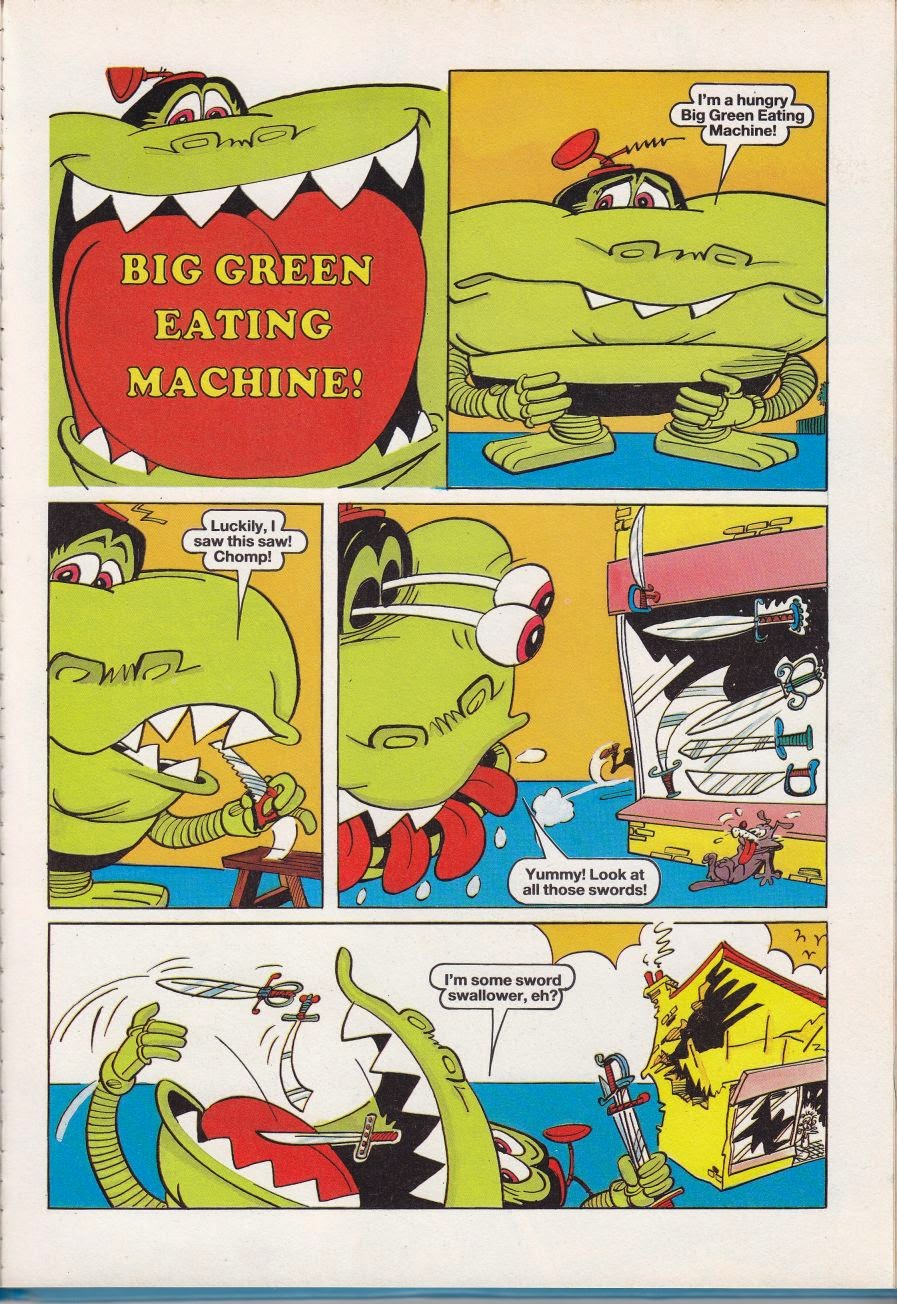 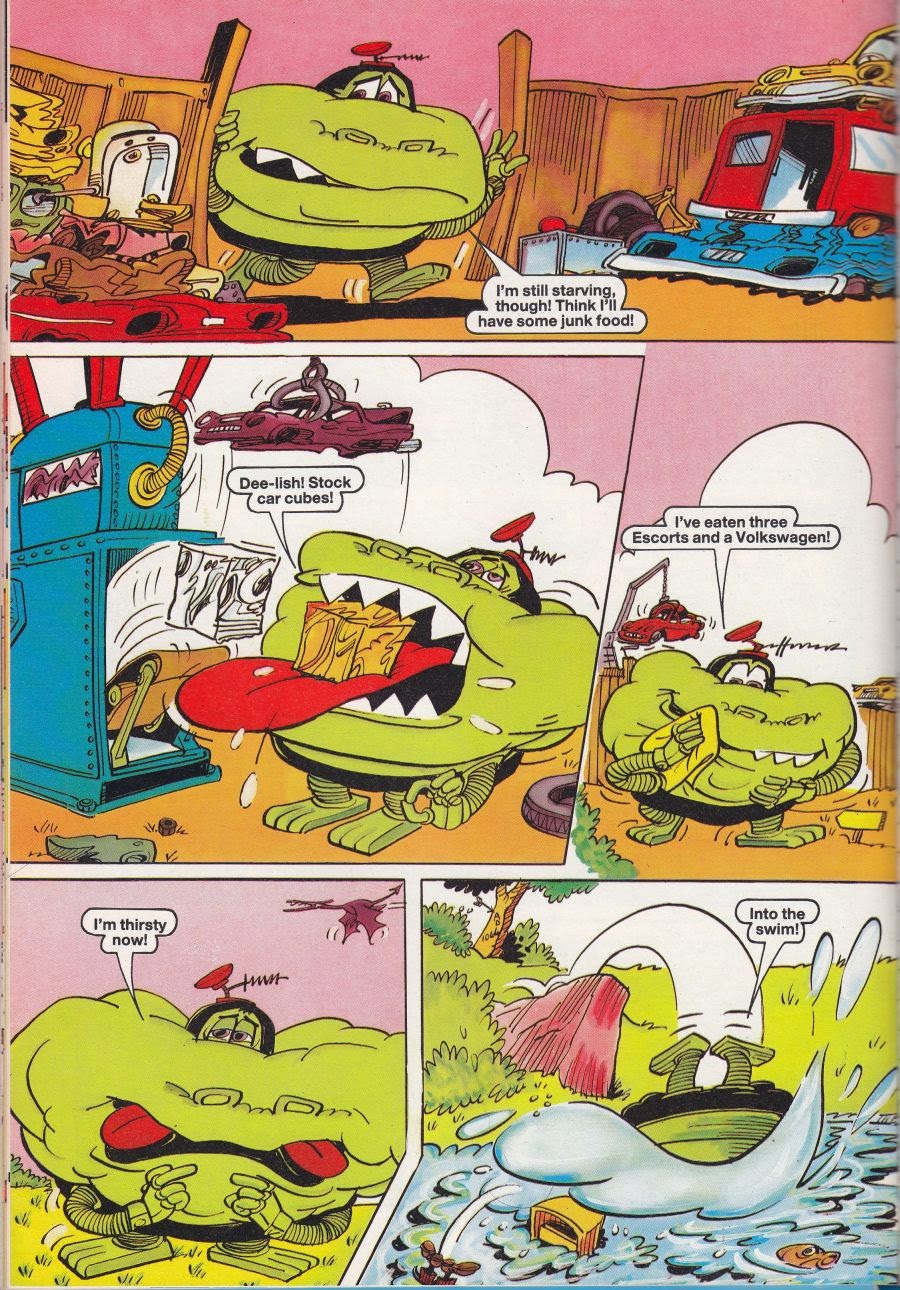 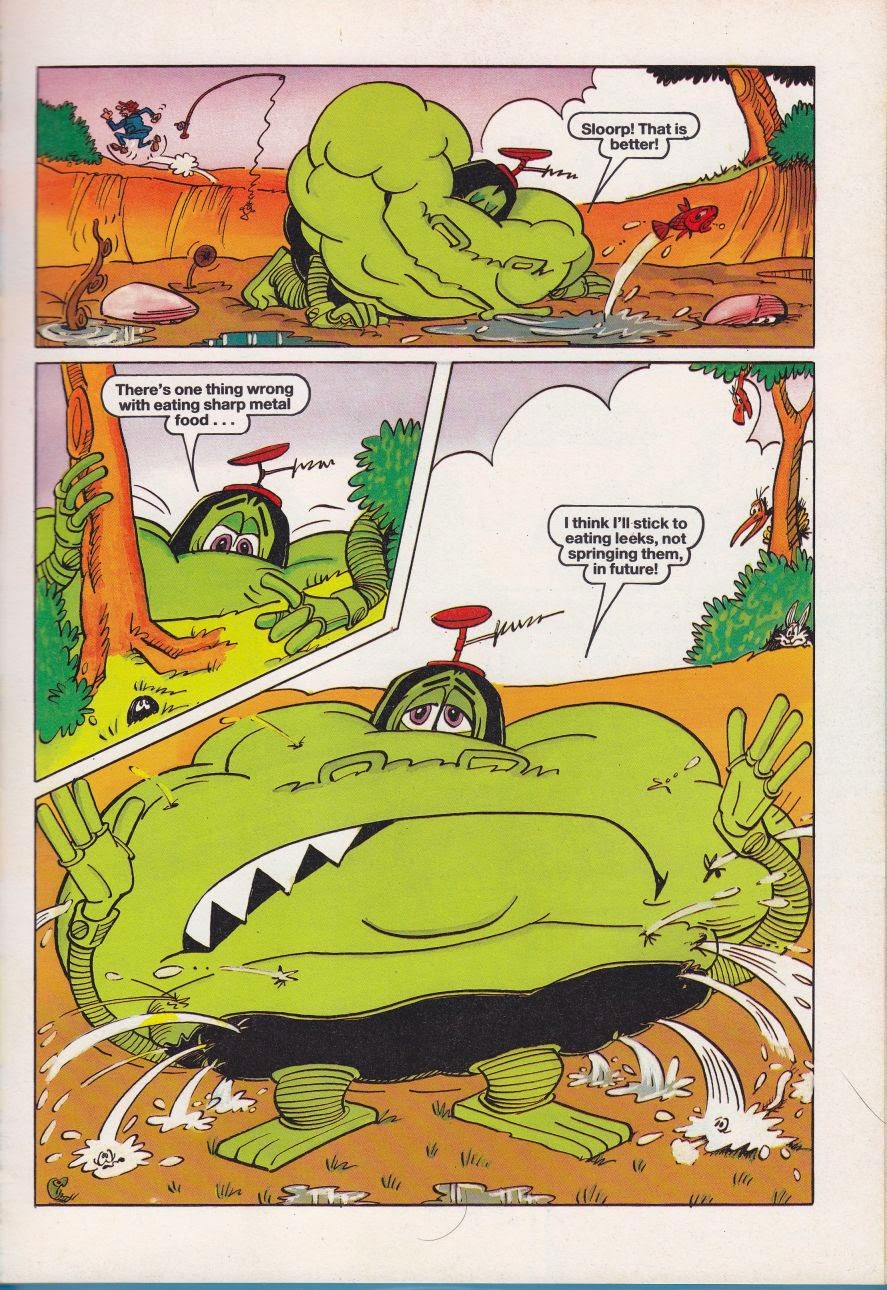 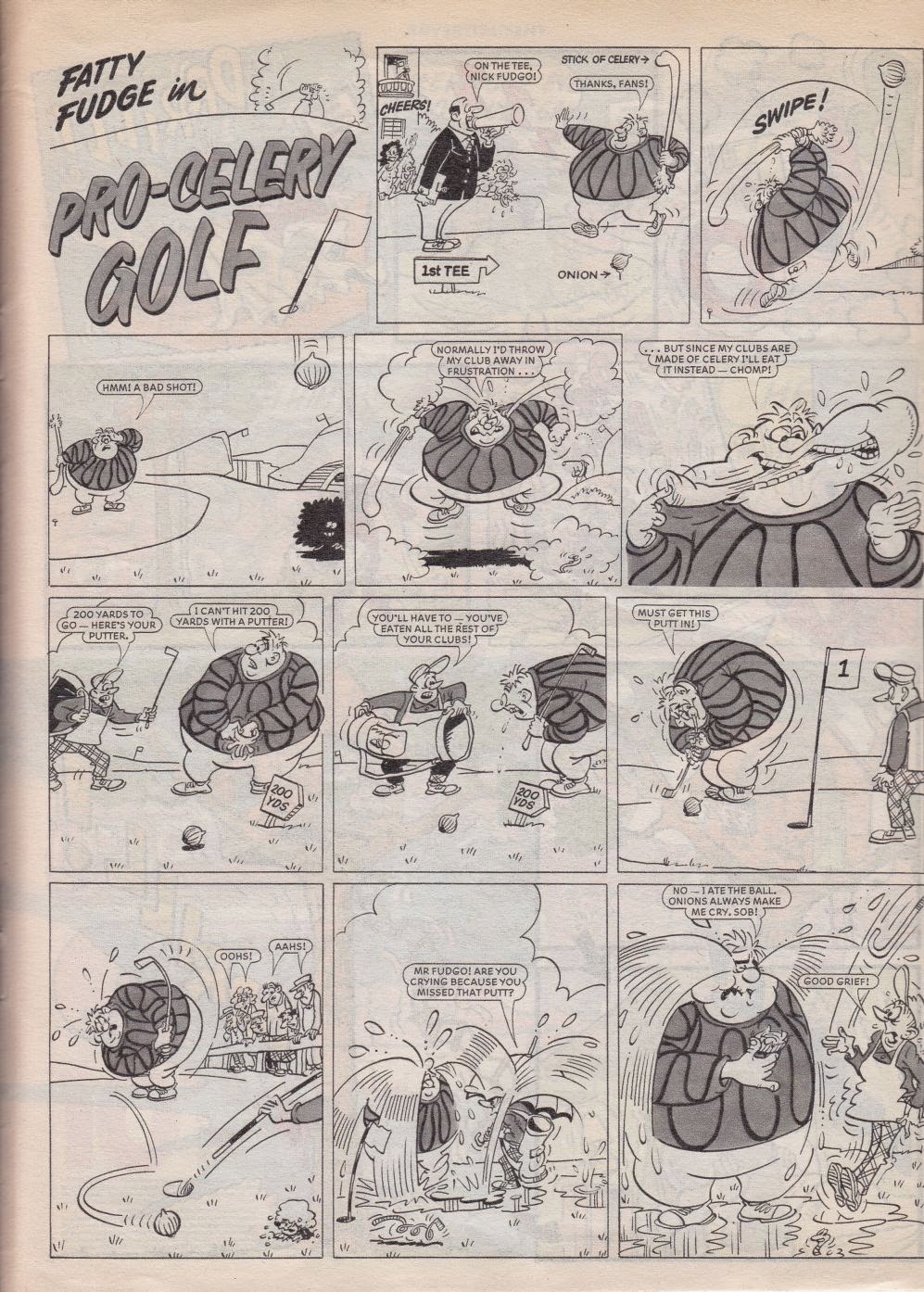 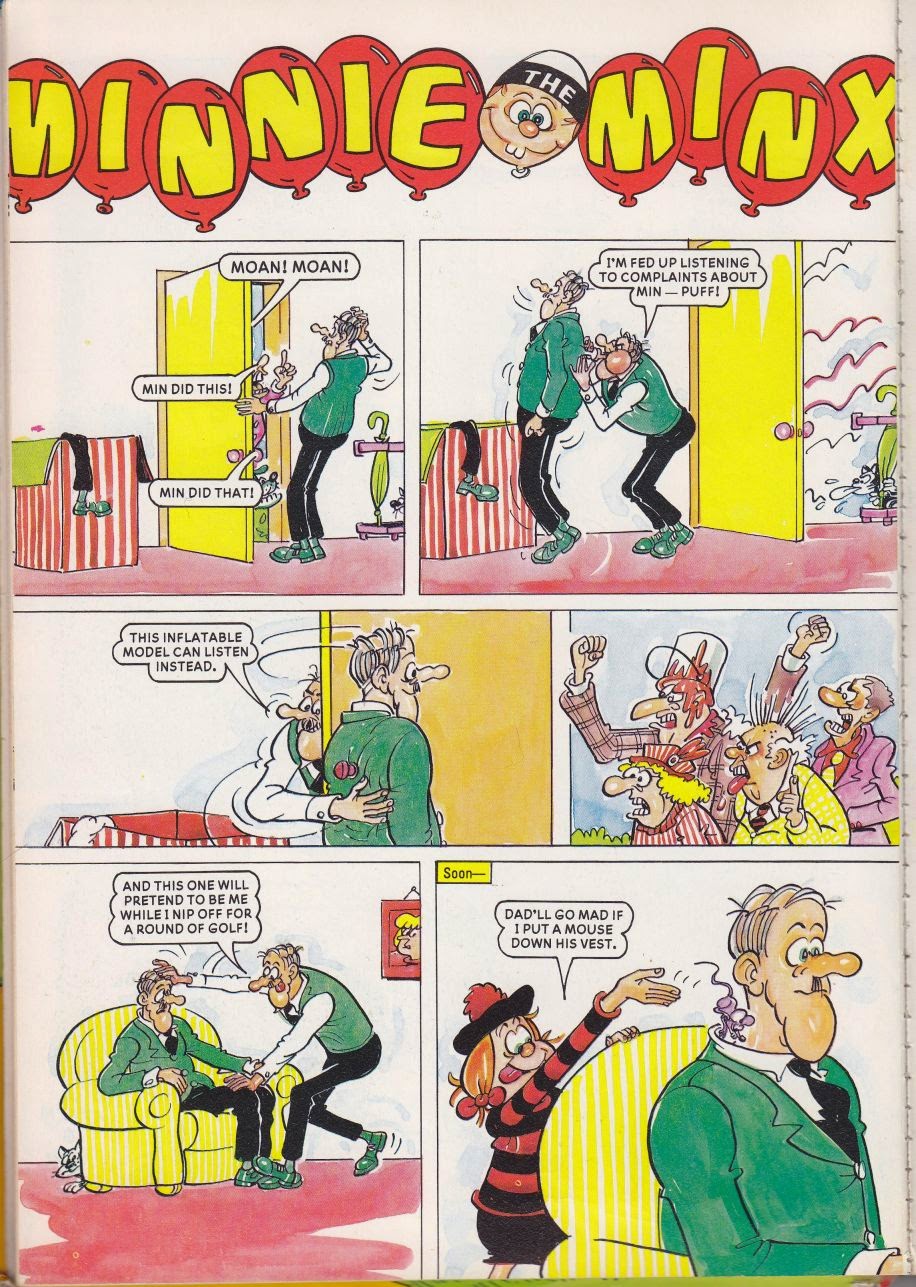 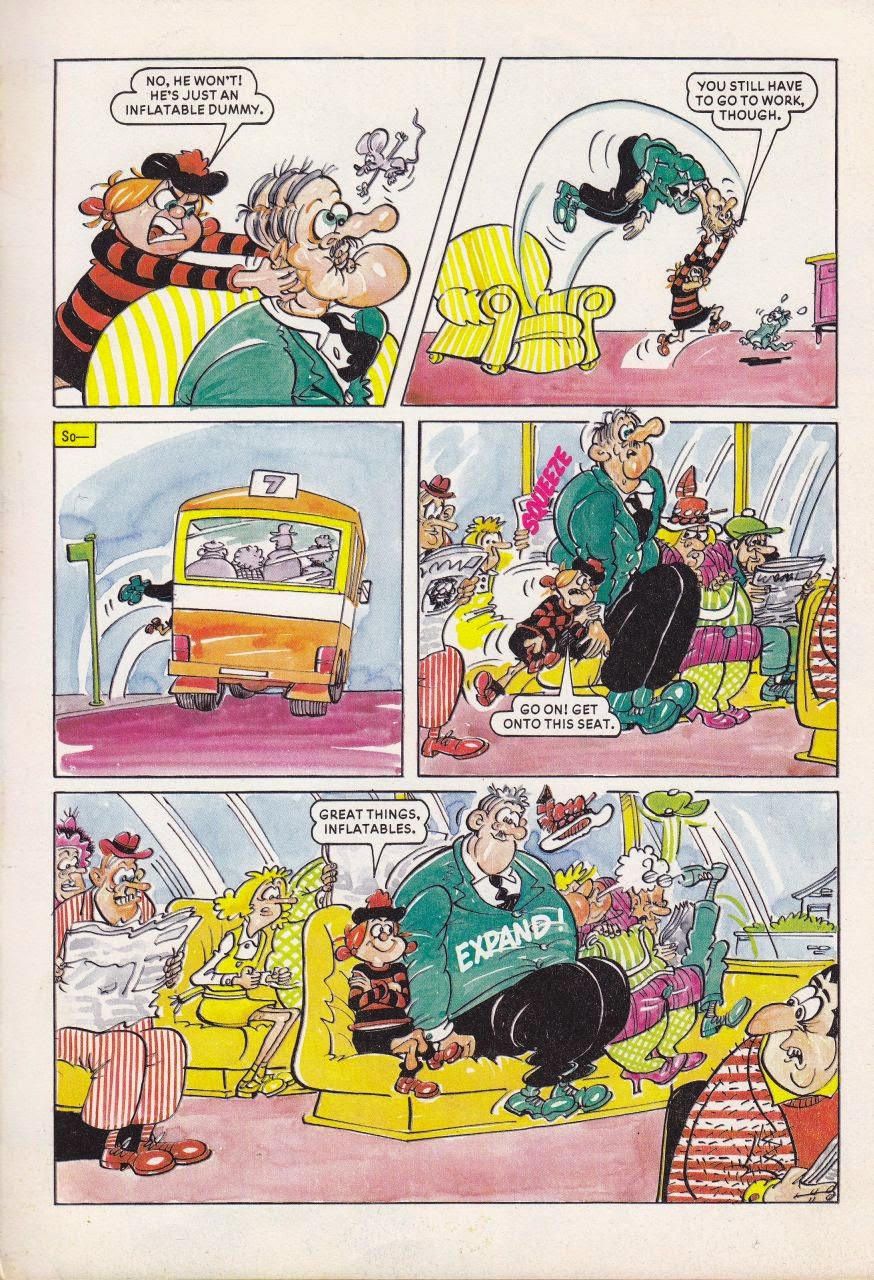 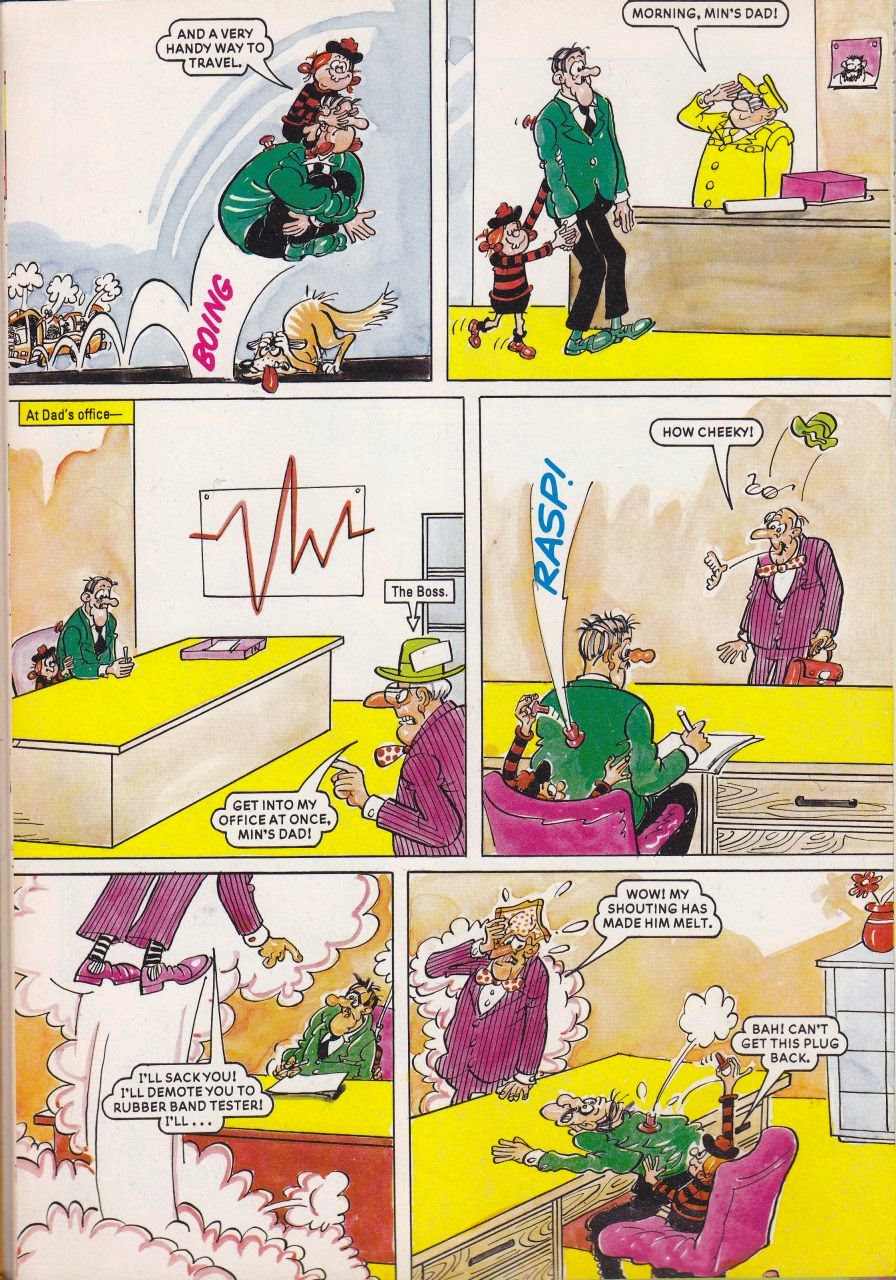 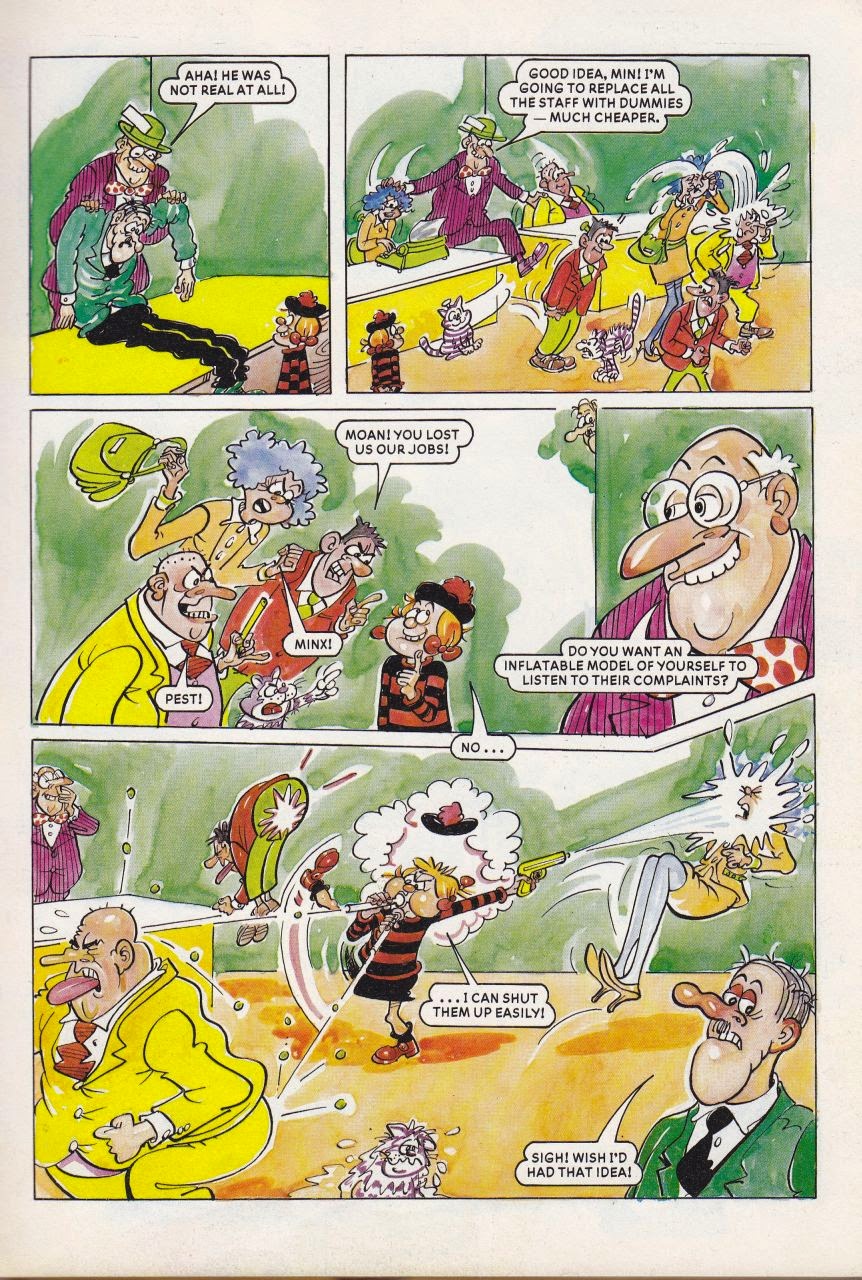 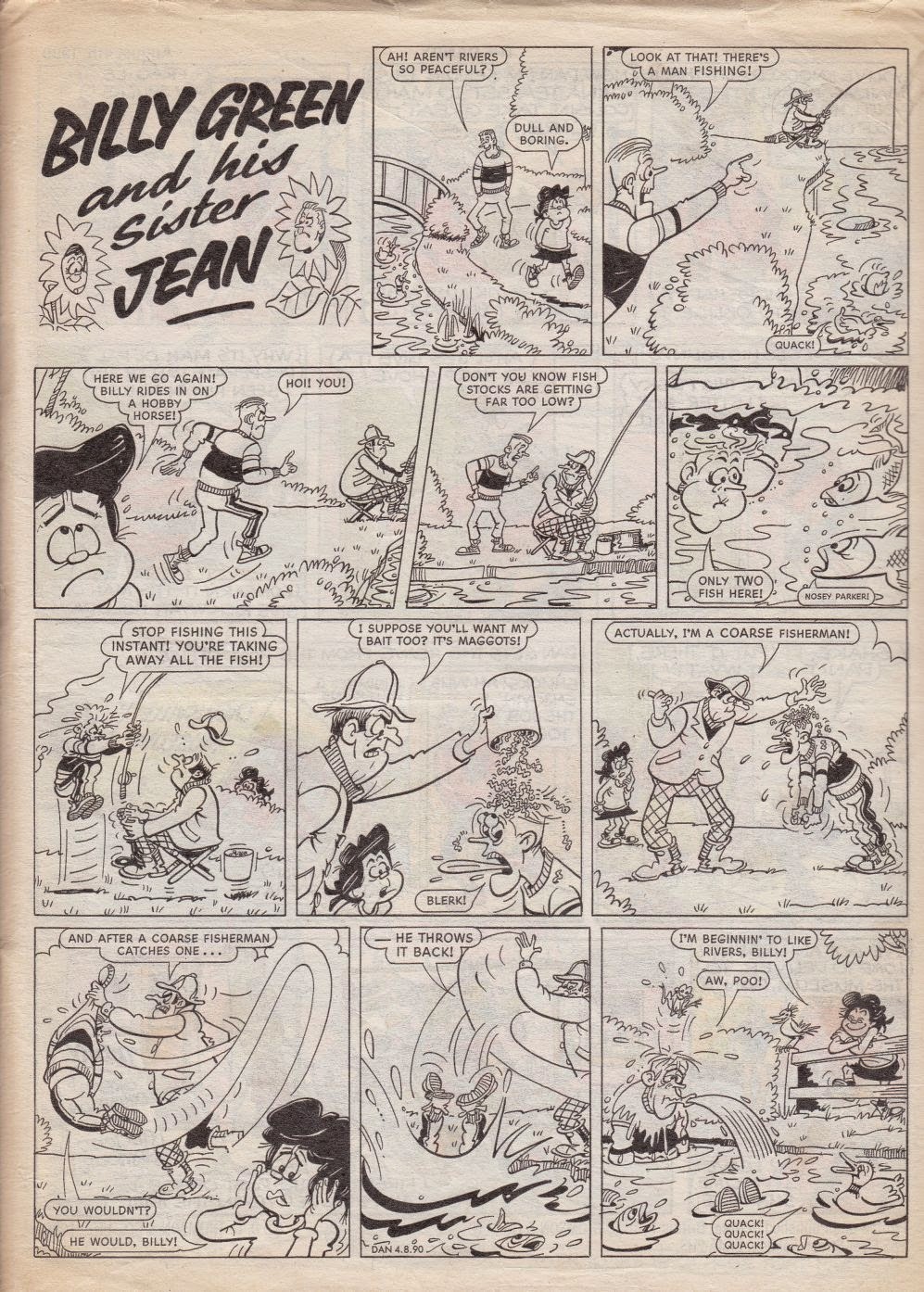 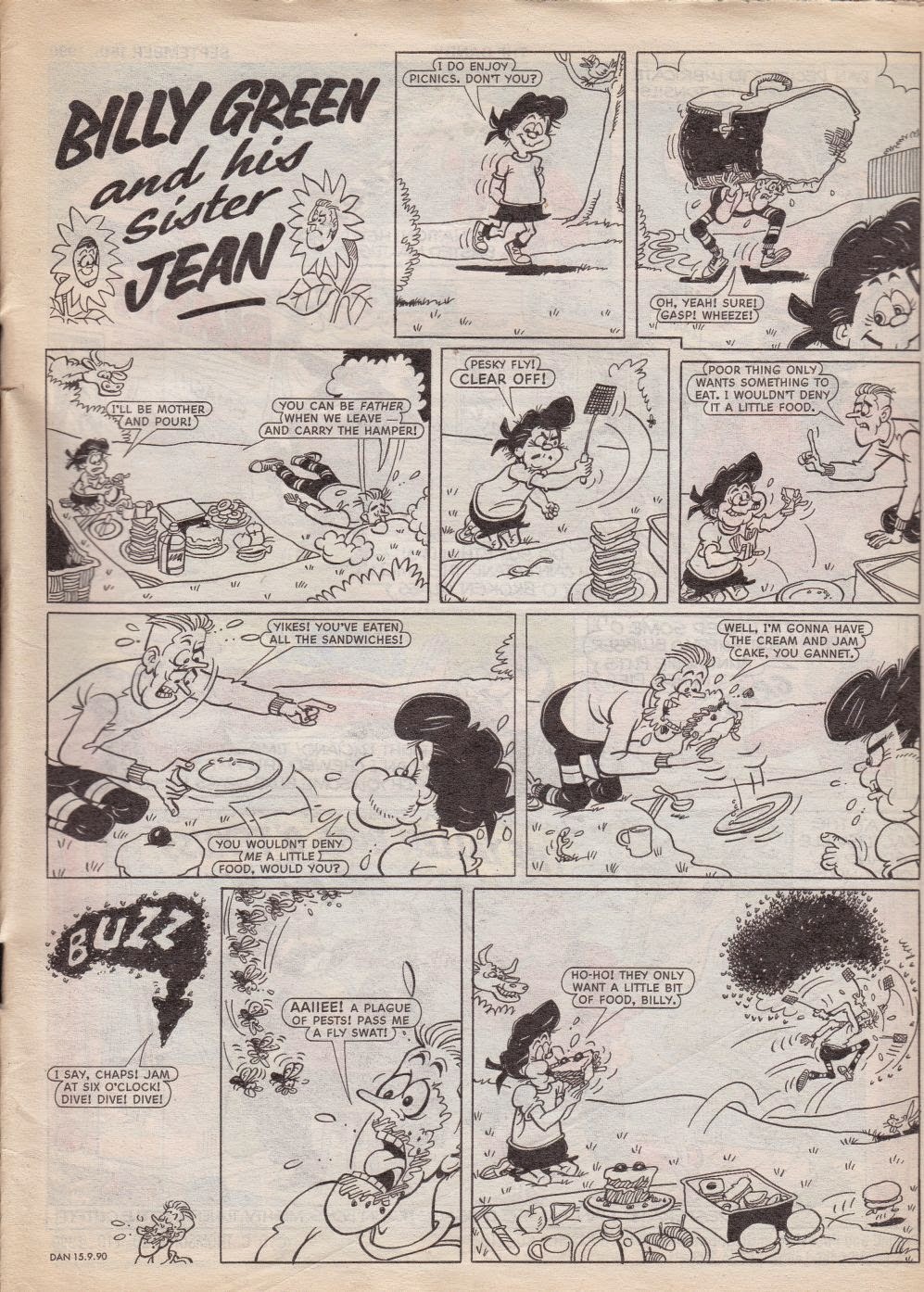 Bugger, another hero's gone - LOVE Jim's stuff, there's not many that give such a sense of "movement" as his wildly spinning limbs and so on do. Plus the weird facial expressions, false teeth popping out, massive tongues... There won't be another like him, that's for sure. 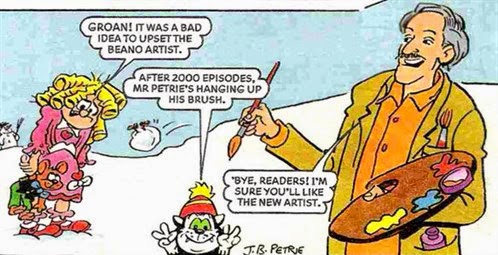 Email ThisBlogThis!Share to TwitterShare to FacebookShare to Pinterest
Labels: Comics, Jim Petrie, The Beano, The Dandy

Stick it in a bag and throw it in the canal 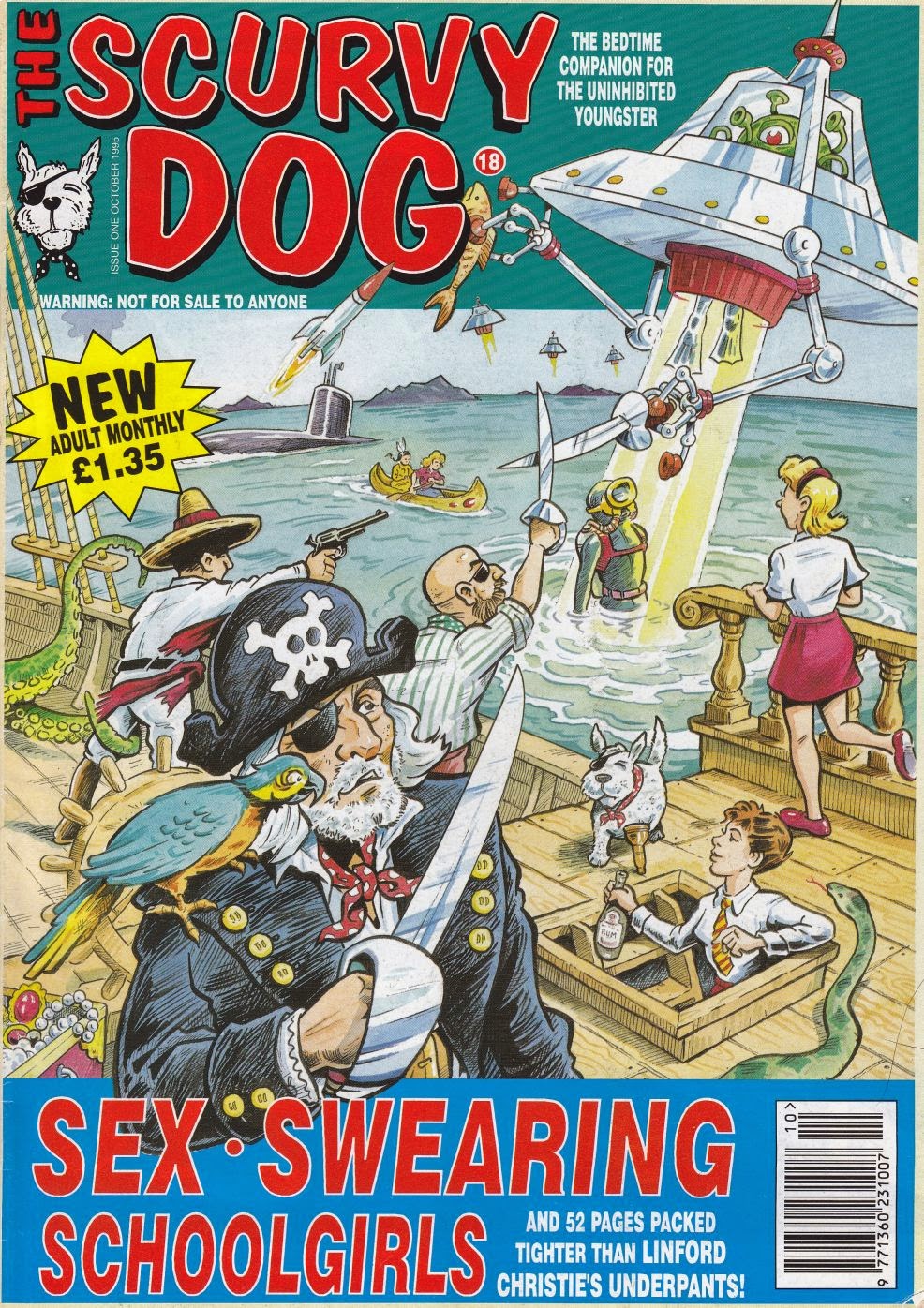 Whilst other "adult humour" comics of the time mostly relied on lampooning the likes of your Beano and your Whizzer & Chips, the makers of Scurvy Dog - those being Graham Hey of Spit! fame, along with Chris Whitehead and Paul Kelly - in 1995 decided to go further back and have a go at a "boys' paper" parody. Writing as someone who's never got ANY enjoyment from such a publication, maybe it's not entirely fair of me to be looking at Scurvy Dog? Well, it's not like anyone else is going to be doing it, so here we go...
Read more »
Posted by TwoHeadedBoy at 8/12/2014 11:59:00 pm 10 comments: 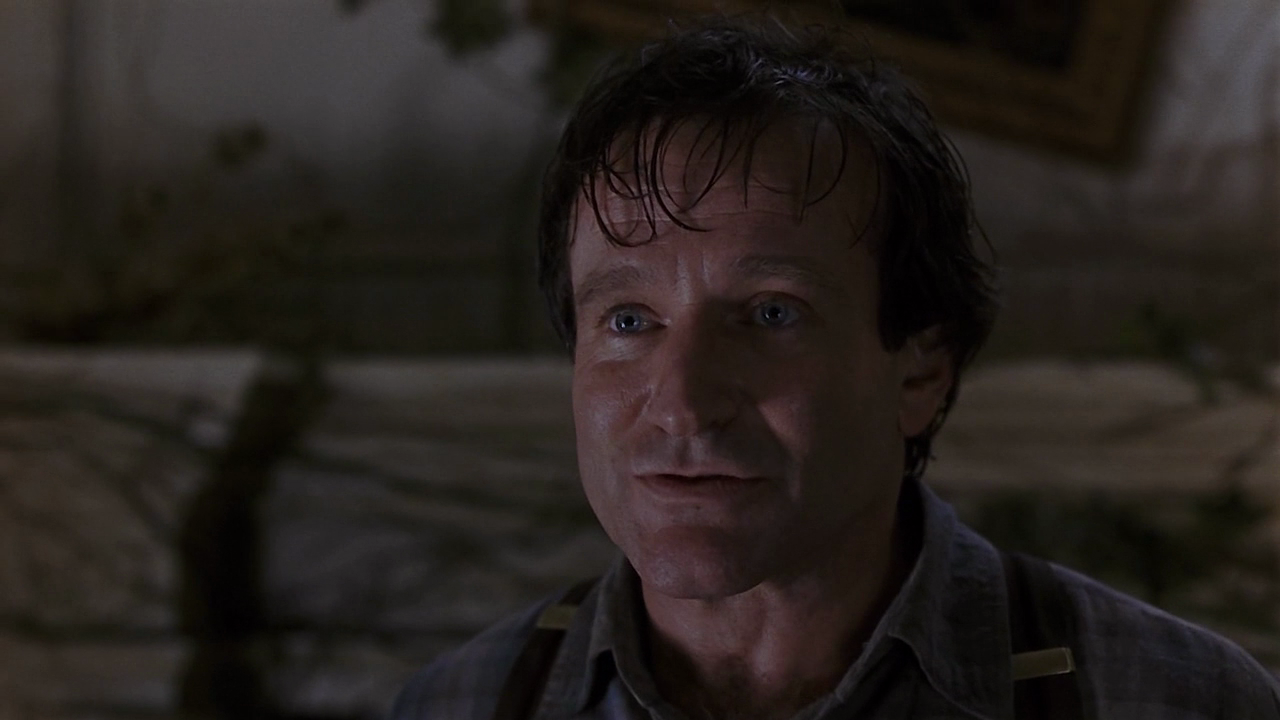 There's been a lot of my favourite famous people dying this year, and today's one seems to be making a bigger impact than most of them. Whilst others have been tragic and/or unexpected, the death of Robin Williams is beyond tragic - this is someone who WANTED to die, how could anyone ever think like that?

Well, we all know the answer, and it's a horrible answer but an answer none the less. It's depression, it's a big thing. Judging by the amount of things popping up all over the Internet today you'd think mental illness had only just been discovered today, but at least it's getting people talking about it, which is something that NEEDS to happen a lot more often. Geoff Lloyd of Absolute Radio fame did a remarkably frank piece on his usually-jovial show this evening, along with a big push for the Campaign Against Living Miserably, and that wasn't an isolated incident either. Here's another thing worth reading, better than any preachy eulogy could ever do:

Call this bandwagon-jumping if you will, but depression is ridiculously common, and the absolute best thing to do about it is to talk about it. This in itself is hard enough, in that it's so hard to explain exactly WHAT it is, without resorting to vague notions about chemical imbalances and crossed wires in the brain and suchlike. Here's as good an idea of it as I've ever read, and even that's alarmingly vague:

Tales of the Smear
(and then read this one as well)

If you'll bear with me, I'm going to talk about my experiences with it now. To be fair, I'll delay publishing this until I've got my next "proper" article ready, so they'll both be there at once, should you happen to be one of those sick fucks who prefers to think that depression is a made-up disease.

I was diagnosed as depressed in 2007 (or "psychotic", to be precise). I was living with a bunch of friends at the time, and it was those friends who noticed that something wasn't right with me. It was them who staged the "intervention", them who made me go to the hospital, and them who cut off all ties with me once I was safely in the hands of the NHS. This is a thing that happens with mental illness - it scares people, and not just those who are stuck with it. Despite going through school with these people, as soon as I was deemed "not normal" in their eyes they were gone. People get scared, fine, but if you really want to call yourself a friend you should be there when things go wrong - if not you'll no doubt make things worse, so they did a great job there.

What followed was around three years of medication in varying dosages and strengths; countless sessions with a counsellor, a psychiatrist, a psychologist and several support workers; a somewhat terrifying CT scan; a few workshops which involved hanging around with other "disturbed" people of varying intensities; and lots and lots and lots of doing nothing. I got fat and slept a lot and most of those three years are a blur, but things gradually started picking up.

Spending more time at home naturally meant spending more time on the Internet, and I joined a forum. About six months after joining, there was talk on there of a meet-up, which I convinced myself to go along to somehow. There were more and more of these, and I went along to as many as I could, each time meeting new, like-minded people. People who today I count as among my best friends, and one of whom is my ultimate reliance. Whenever things are getting bad or at their absolute worst, she's there to listen, and that's enough. If everyone would just get their selfish heads out of the sand and LISTEN when someone's falling to pieces... Idealism etc. My rock doesn't like comics so she's not likely to read this, so at least I'm not embarrassing anyone here.

Something else happened about a year or so after getting involved with "Internet people" - I was offered a job. Nothing fancy, but a job, which gave a reason to get up in the mornings, and this was a big development. I was active and speaking to people everyday, I lost weight, built muscles, earned my own money. Eventually I decided to bin the tablets and cut myself off from the support workers, and even got out of the house and moved into a place of my own.

I was lucky, is what I'm saying. Or "am" lucky, whatever. But just like any illness, the effects are long-lasting, sometimes even permanent. I still get angry, still get miserable, still get hopeless. Only three weeks ago I was reasoning with myself how I'd prefer to be dead, whilst at the same time telling myself I'm too much of a coward to actually go through with it. Seven years ago this would've been dangerous, but now I'm surrounded by people who actually give a fuck, people who can tell when something's wrong and are there to give me a kick up the pants and send me in the right direction again. Where I am right now isn't perfect, far from it, but as long as there are people willing to listen, I'm happy with that. People deal with depression in many different ways, and my way mostly involves making sure there's enough distractions around to keep me from thinking about it, so there.

Let's get back to the comics now and pretend everything's fantastic again.