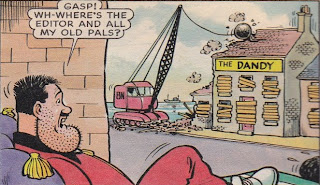 I'm a few days late with this, clearly, but everyone's heard the news by now: The Dandy is dead. Sort of. It's still got until the 4th of December (nice of them to let it shuffle on to its 75th birthday), so that's... another fifteen issues to go? And it'll carry on in digital form after that. What that entails, I do not know. I don't have an iPad and'm not really a fan of reading comics on a computer screen, so it may as well be dead.

There's been tributes and comments all over the place this last week - nice sentimental stuff from the likes of John Wagner and Lew Stringer; "sensible" bollocks from big-heads like Charlie Brooker; a sad little satirical cartoon from Lee James Turnock; and an agreeably honest look at what went wrong from Kid Robson. So, what more can I add? Nothing much, except for a look back at happier times.

Like many, it was reading comics that helped me with reading in general. After being given nothing in school but the endlessly depressing Peter and Jane books, reading wasn't exactly high on the list of things to enjoy. Then one Summer's day in 1992, from Miriam's Newsagent, I was bought these two things: 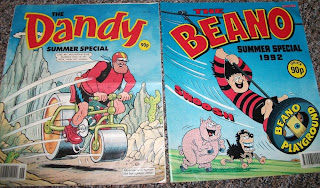 Those two Summer Specials had me hooked instantly, and before long we'd set up a standing order at another newsagent for the two giants of the DC Thomson publishing company. That standing order lasted until around 2001 - interest had fizzled into other things, naturally, but at least I stuck with it for longer than my peers. Those massive stacks of comics all mysteriously went missing during a house move (although the annuals, specials and Comic Libraries were saved), but I've gradually been getting them back these past few years, as well as piles of comics from the years I missed out on (pre-1992 and post-2001, obviously). As of today, I'm up to around 600 Beano comics and 250 Dandy. Getting there!

Anyway, that's the past. The present is known to many, and it isn't a happy one. The Beano's MOSTLY unchanged aside from the obvious changes in artists, yet the Dandy's gone through ill-advised change after ill-advised change since 2004 (peaking with the horrendous Dandy Xtreme in 2007), ultimately leading to its demise at the end of this year. Leaving well alone, heard that one before? The very last issue is going to be a full-blown double-length celebration affair, and no doubt it'll sell more than any of the past couple of years' issues ever have - a fair amount to filthy vultures, I'm guessing.

I'm looking forward to it - not the end of the Dandy, obviously, but the end-issue itself. It's going to be of a celebratory nature rather than funereal, and in preparation for it, let's go back fifteen years to the Dandy's 60th birthday celebration issue. Happier times indeed! 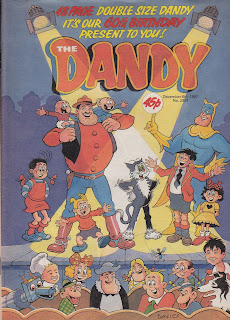 Nice cover, yes? A mix of the old and the new, with the (then) current stars in the spotlight and the mostly forgotten folk in the audience, but still smiling. And it's also 48 full-colour pages for just 45p. Even in 1997, that's a good value comic! Look closely, you can see where the newsagent had scribbled my name on the cover. Original artifacts, here!

In the month leading up to this issue, a continuing story arc saw Desperate Dan strike oil, become a multi-millionaire and quit his job at the Dandy. The opening strip in this issue finishes off that story with Dan realising that without him, there IS no Dandy, so he must act to save it. And save it he does: 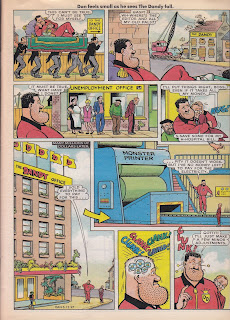 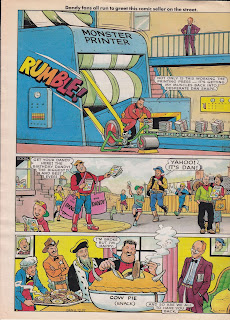 Three cheers for Dan, etc. Next is an advert for glowing arm-bands to help kids cross the road in the dark (from when even the adverts in comics were like "bonus comics" - this one by Mark Bennington of Buster fame). Barrie Appleby's Cuddles & Dimples are on the next page, followed by a new character called Jak (who would eventually, inexplicably, make it onto the cover). After that is a "thank you" letter from Desperate Dan himself, signing off as "Your pal for the next 60 years"... 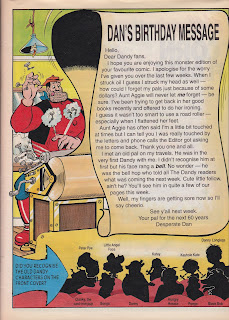 Following this is another advert-comic, this one a double pager for Corn Flakes from the brilliant Bob Dewar. Then there's a reprint of a Black Bob story from 1965, followed by a funny little celebration piece featuring David Mostyn's Molly. There's always time in this world for Mostyn to draw some funny stuff! 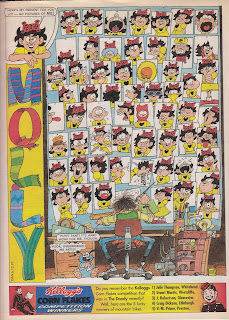 A two-page Bananaman from John Geering follows this, then it's Growing Paynes by Trevor Metcalfe. And a "normal" advert for LEGO. After this is a "new" three-page story called Tricky Dicky Doyle, done in the style of the older Dandy adventure stories. It's about a boarding school pupil who inherits a joke factory, and seems out of place in the Dandy of 1997. At least it LOOKS nice - think it's drawn by Keith Robson, but don't quote me on that. After that there's an advert for hamster cages, then it's Brian Walker's Smasher: 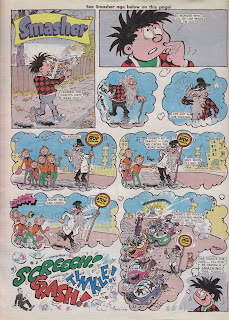 I love the messy scenes of chaos and broken glass that seem to be a constant feature of Walker's stuff - also how he made out Smasher to be more of an accident-prone teenager than the malicious little monster that Hugh Morren originally made him out to be.

The upcoming last-ever-issue will include a facsimile copy of the first ever issue, which I'm looking forward to. I've already seen it, thanks to the highly recommended book called DC Thomson Firsts, but it'll still be nice. The 60th birthday issue did something slightly similar, presenting a picture of the first issue's cover, and a couple of pages from said issue spread throughout the rest of the comic: 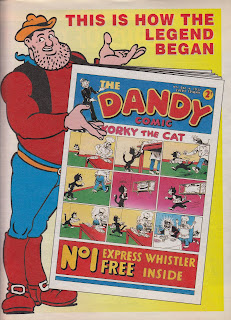 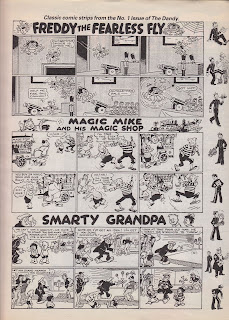 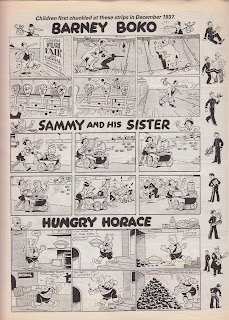 We're also given a centre-spread from Winker Watson depicting "60 Years of Greytowers Guffaws", Keyhole Kate from Sid Burgon, Peter Pest from Trever Metcalfe, another comics-advert (this one for Jaffa Cakes), Blinky from Nick Brennan, a two-page story about Desperate Dan's nephew and niece which looks like it was done by either Ken Harrison or David Parkins (but what would I know? Could well be neither of those two!), and another "new" character in the form of James, The World's Worst School Boy (which is actually an older character with a new artist). Then there's this strange page from John Geering: 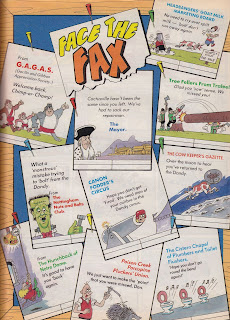 It's easy to understand, but there's no straight explanation what these pun-filled faxes are about - it's various folk welcoming Desperate Dan back to the comic, in case you don't "get it". After this there's a two-page Beryl the Peril from Robert Nixon, an advert for the Casper cartoon, a two-page Fiddle O'Diddle from Tom Paterson, an advert for that year's annuals, and then... a quiz! 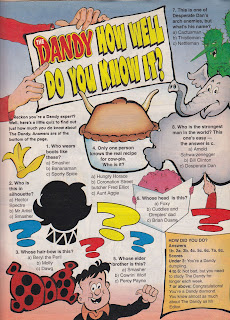 An incredibly easy quiz, at that! It's a bit of fun, like. See how you do without looking at the answers, why not? Two more pages of Winker Watson follow this, culminating in a slap-up feed: 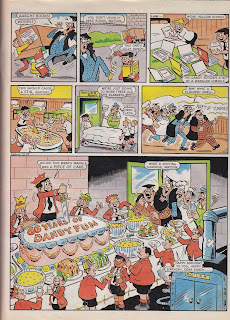 Next, Sid Burgon offers a preview of what the next 60 years have in store for various Dandy folk: 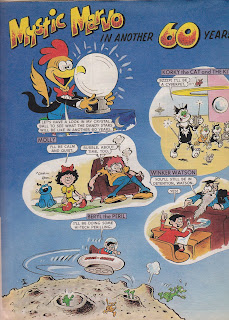 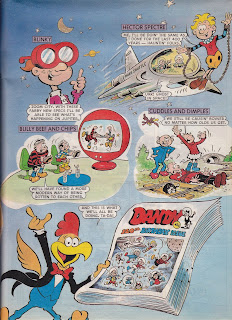 Looks like Dandy readers in 2057 will have a whole telephone book worth of comics to enjoy every week! Exciting times indeed! The whole thing is rounded off nicely by Robert Nixon's Korky: 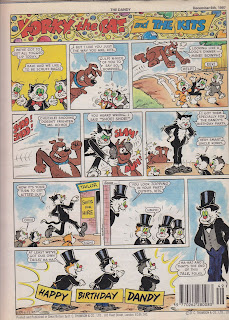 And that's the end of the Dandy's 60th birthday bash. Who'd've thought that only fifteen years after this, things will've changed so much that it would be beyond saving? As I said before, happier times indeed.