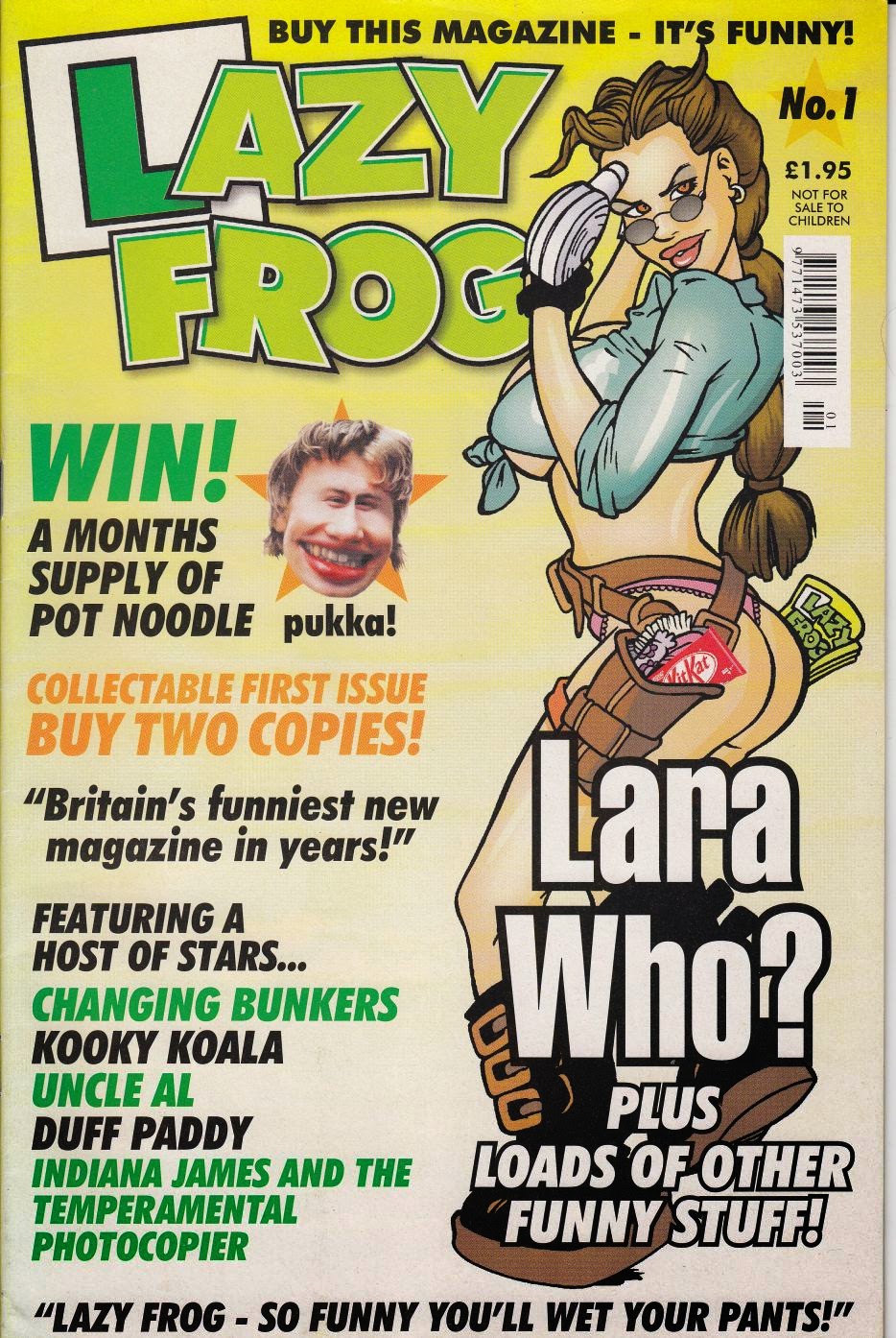 The first issue seems like more of a "lad's mag" parody than a comic - out of 32 pages, ten of them are comic strips, the rest consists of "funny" things, which of course is entirely subjective. Things like My Kind of Wank with Patrick Moore (featuring Declan Swan from the Claims Direct adverts), Diary of a Drunken Male aged 30 and 3/4 ("Woke up on the stairs! Despair..."), bar games, quizzes, daft news stories, things like this: 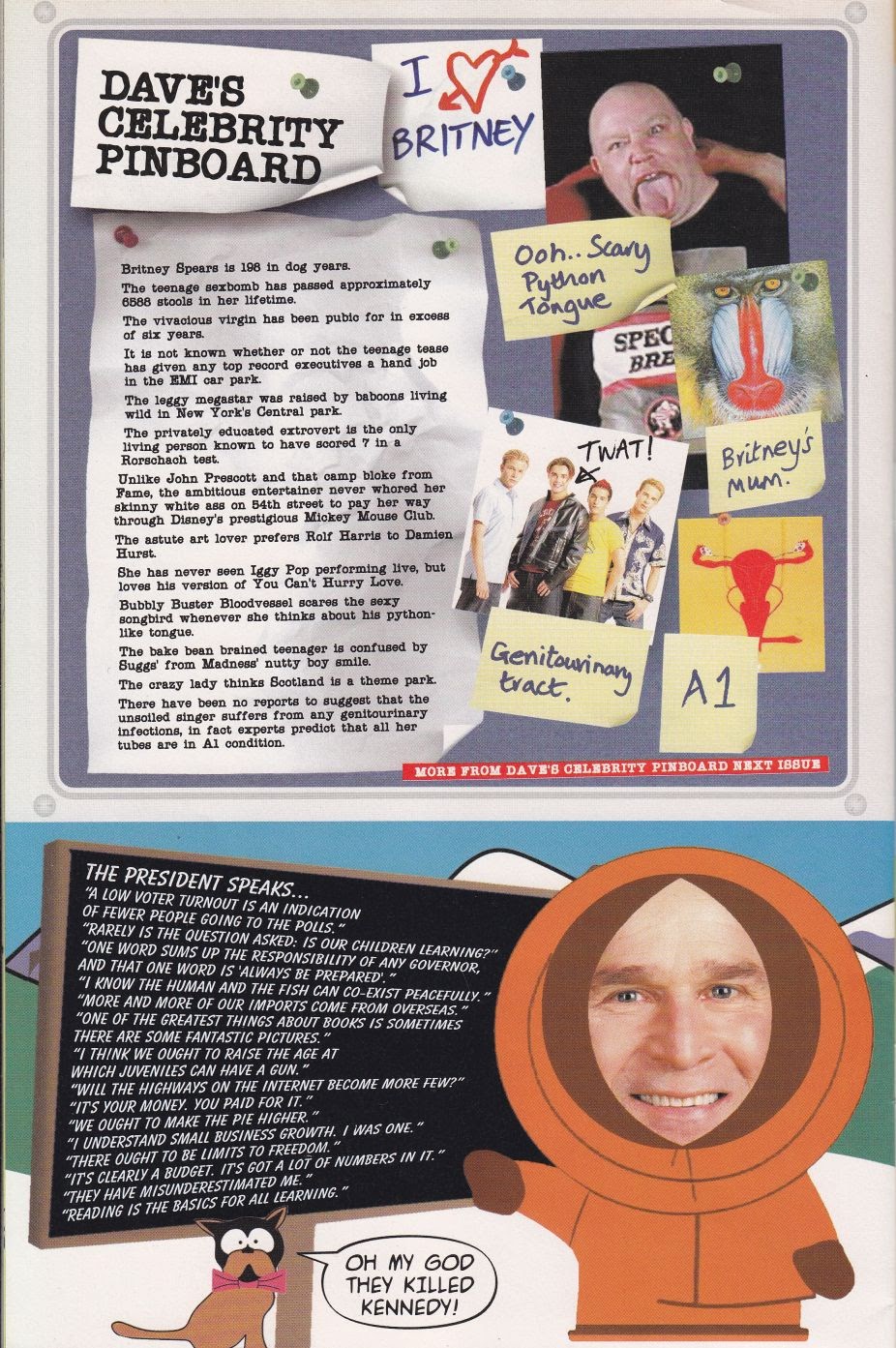 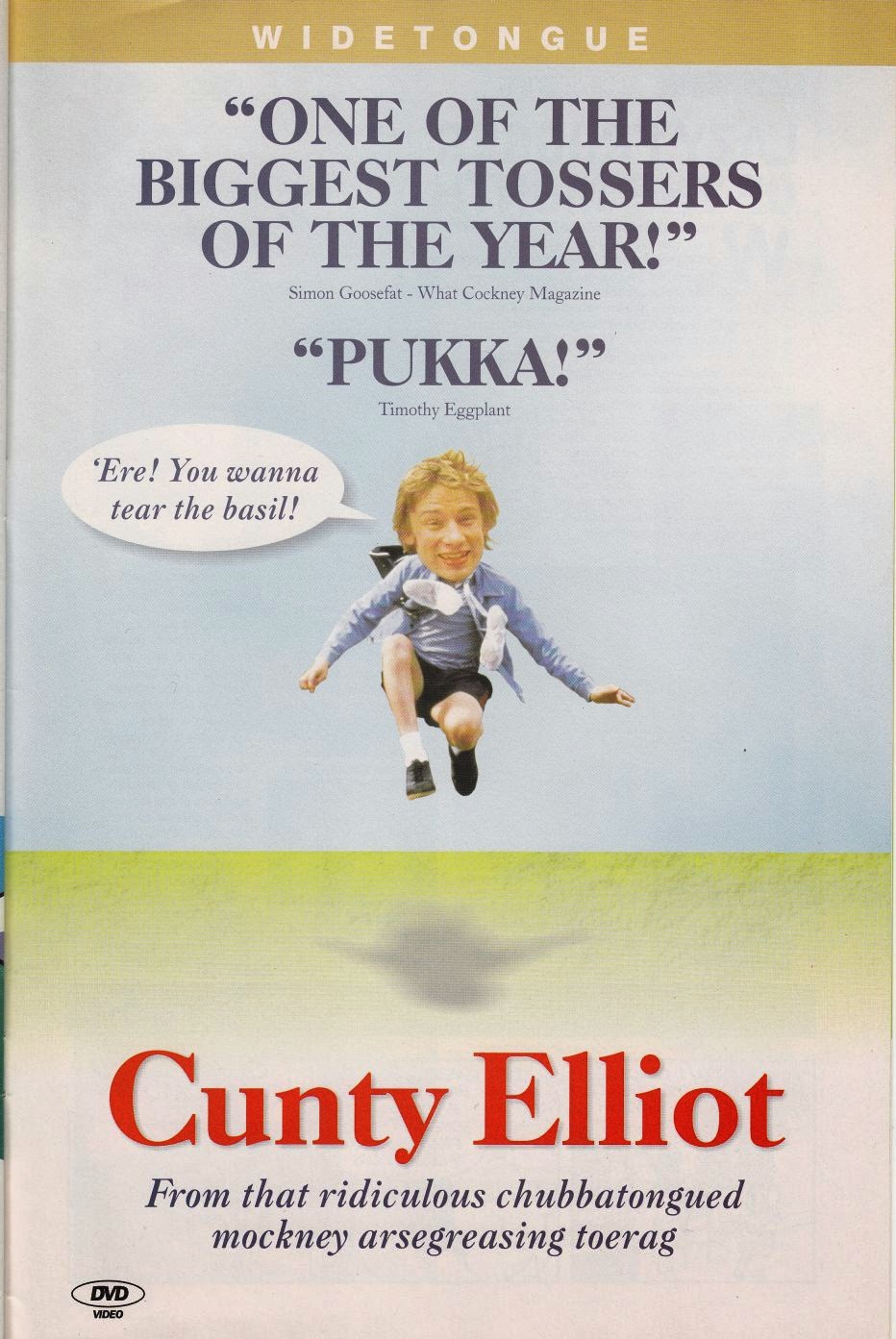 You know - the kind of things that give away the publishing date without even using numbers. And speaking of being an object of its time, the first issue also has this page: 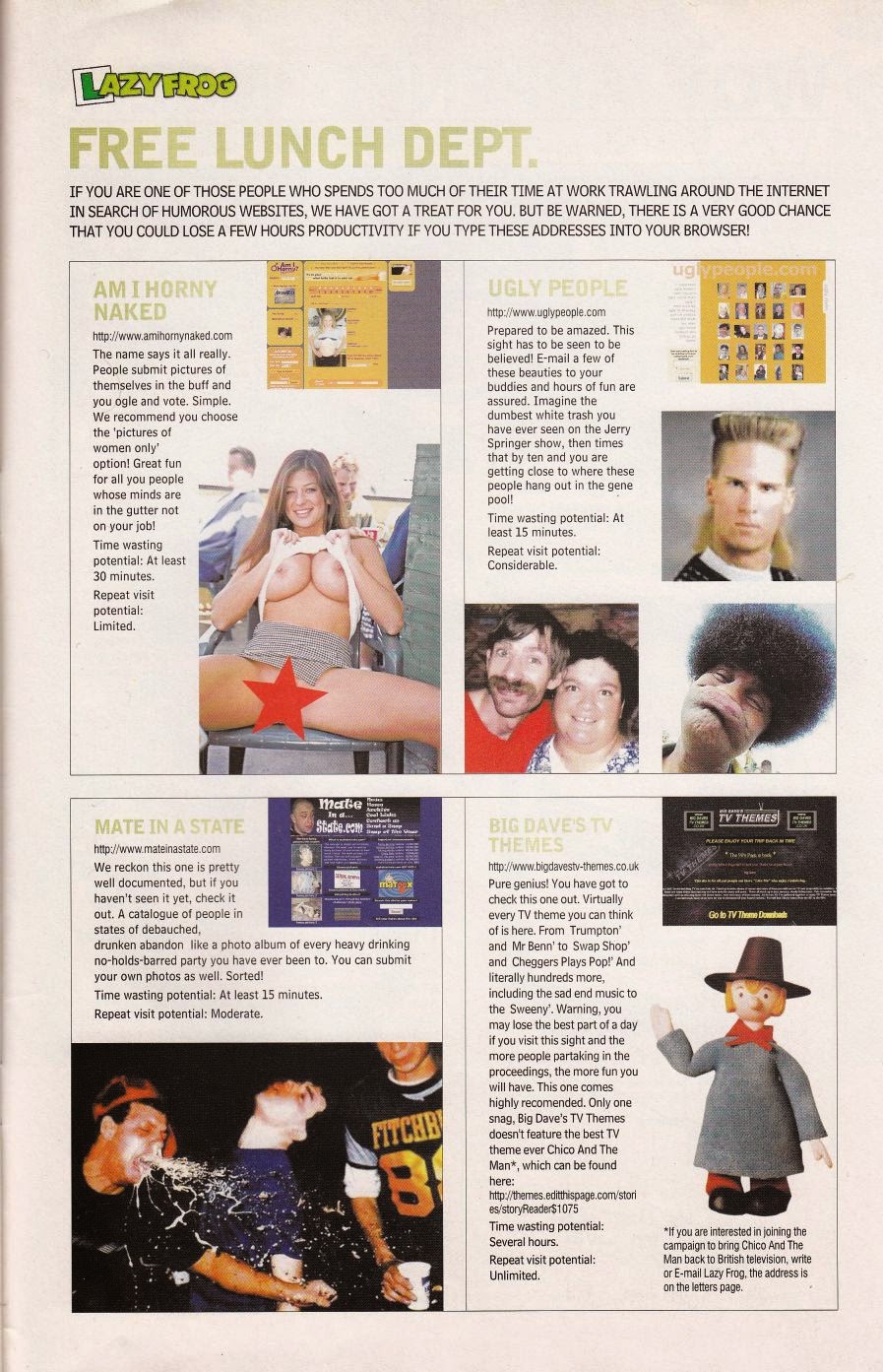 Ah, when the Internet was still a novelty and not the main reason most people get out of bed on their day off. Only one of those featured websites still works, and it doesn't seem to match its original description (just don't try them out if you're in public!).

Right in the middle of that first issue though, is this: 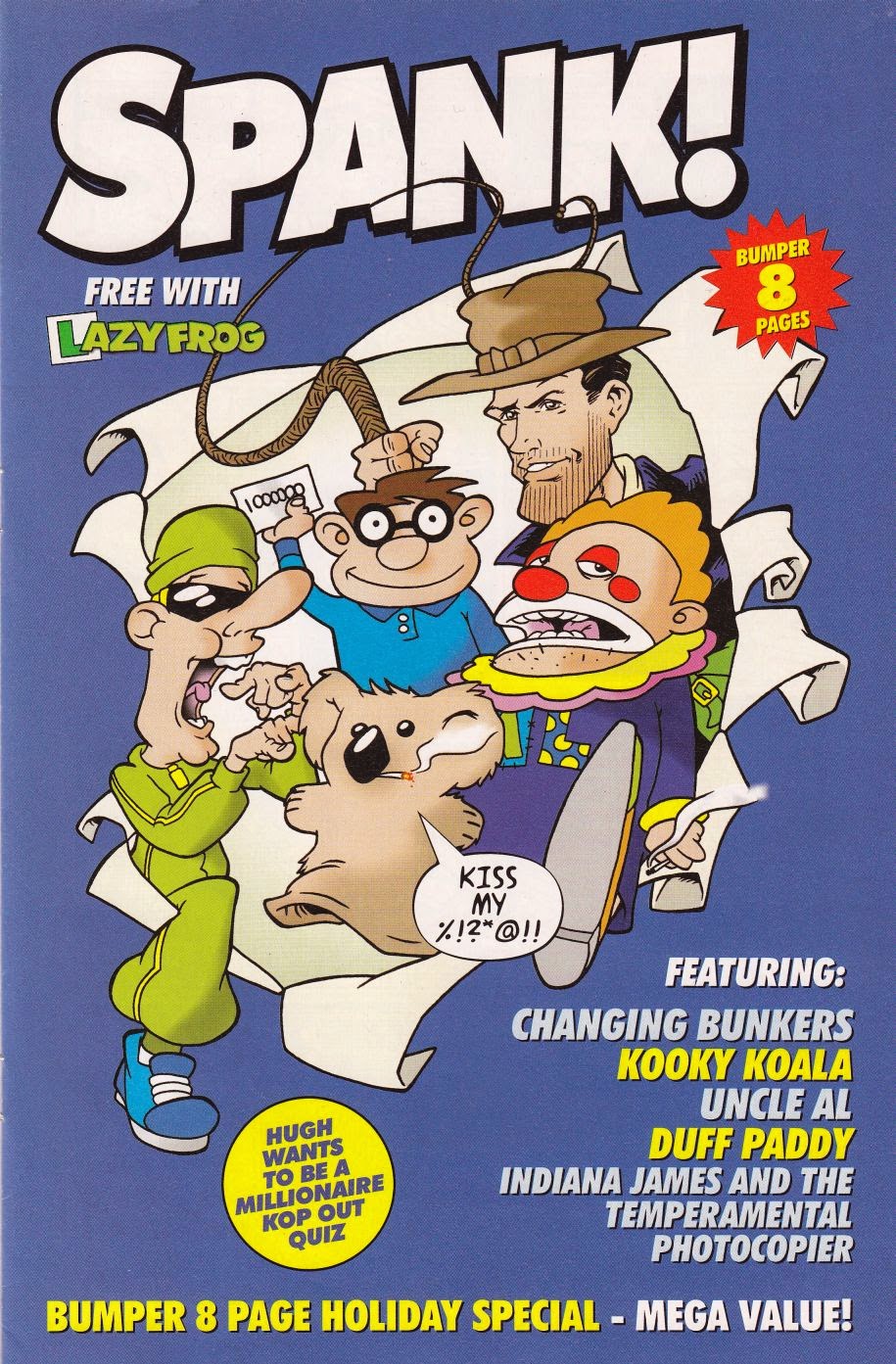 That old "comic-within-a-comic" thing, similar to what Cheeky Weekly used to do so well, perhaps. It's kind of alright on the inside of this bit, in that it features Kooky Koala, the mandatory "children's TV puppet doing rude things" strip: Uncle Al, The Kiddie's Pal, who is in every issue of Lazy Frog that I've read: 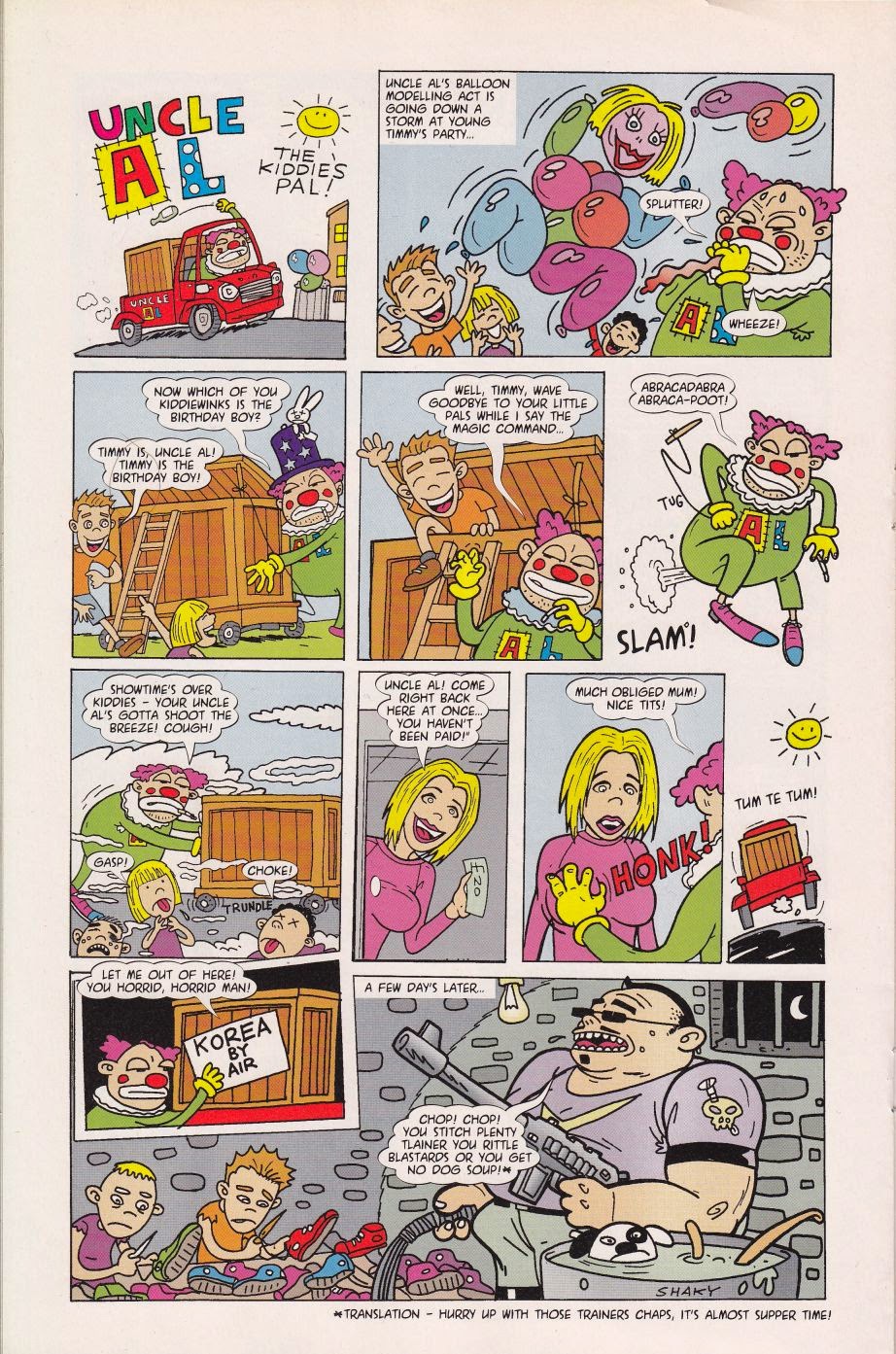 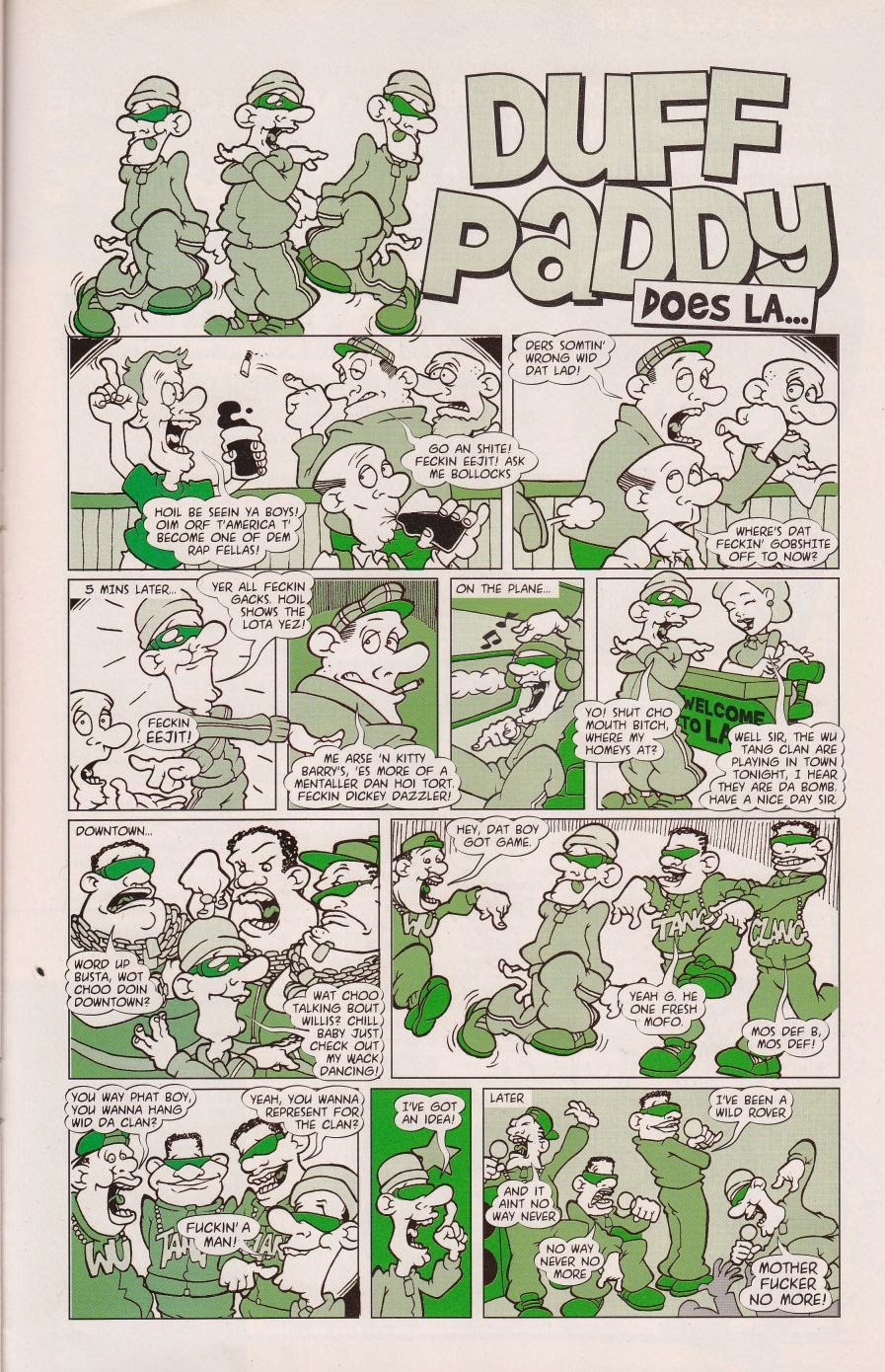 And these two things - both of these strips were reprinted in the fourth issue, only with added colour, which is what you'll be seeing now: 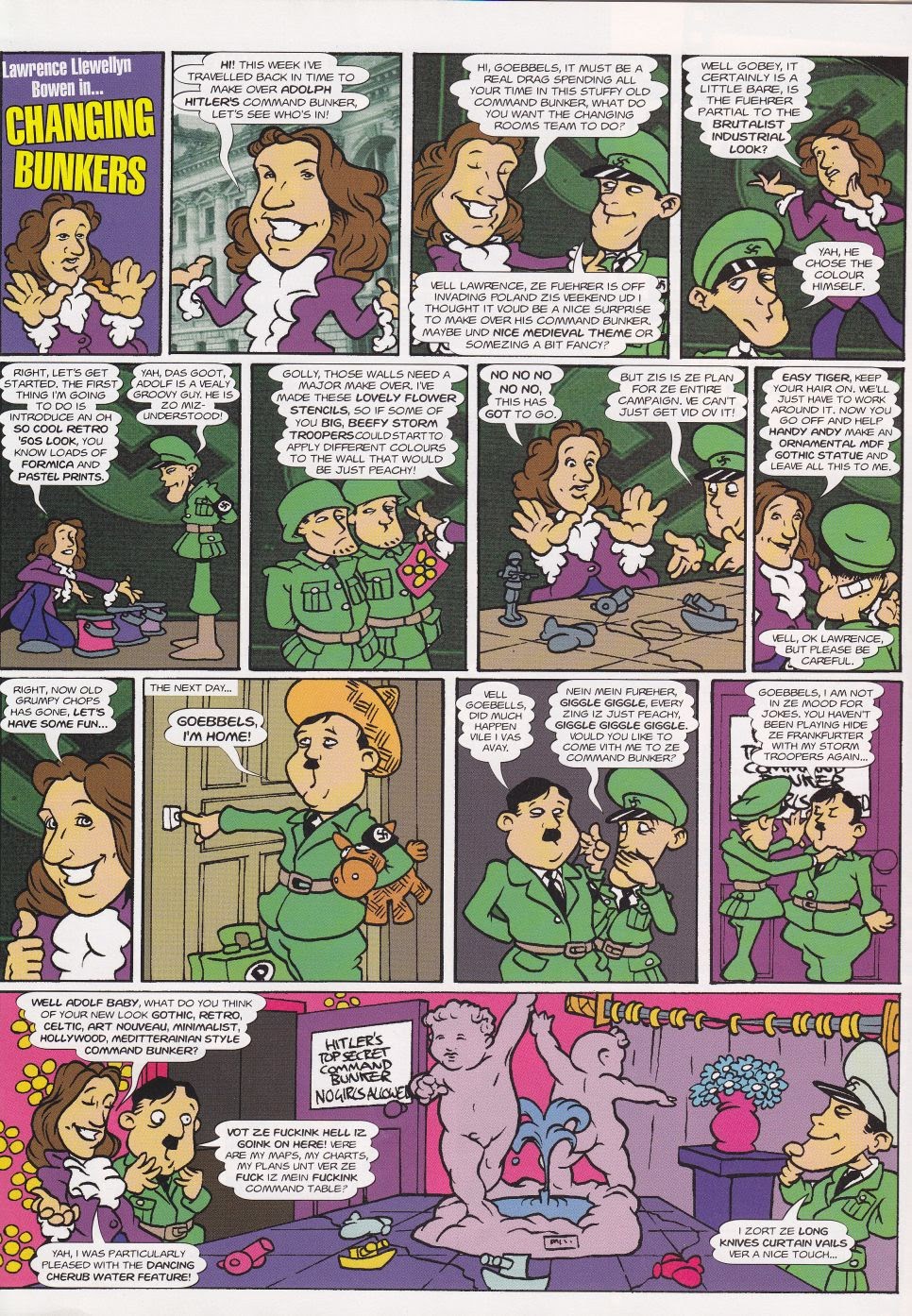 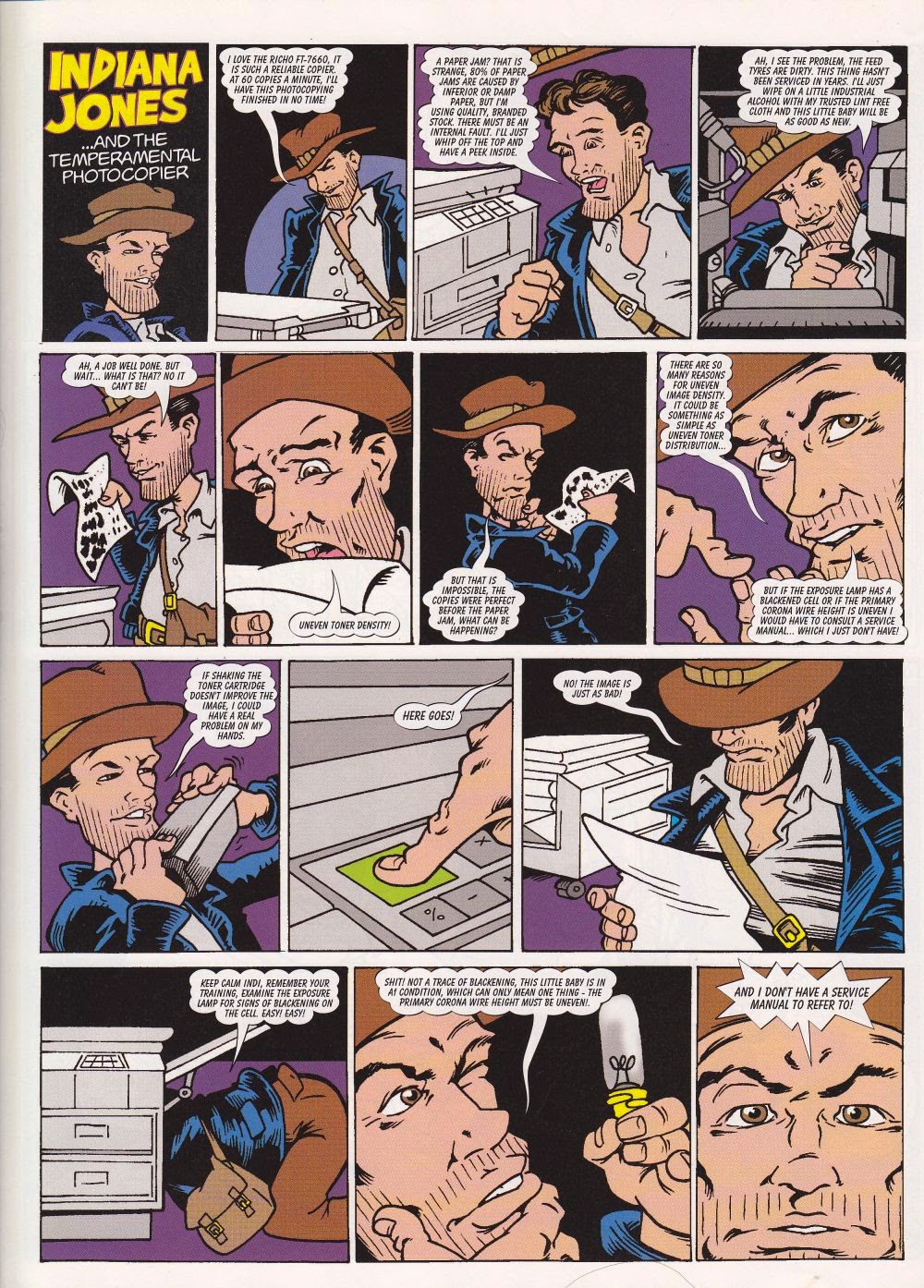 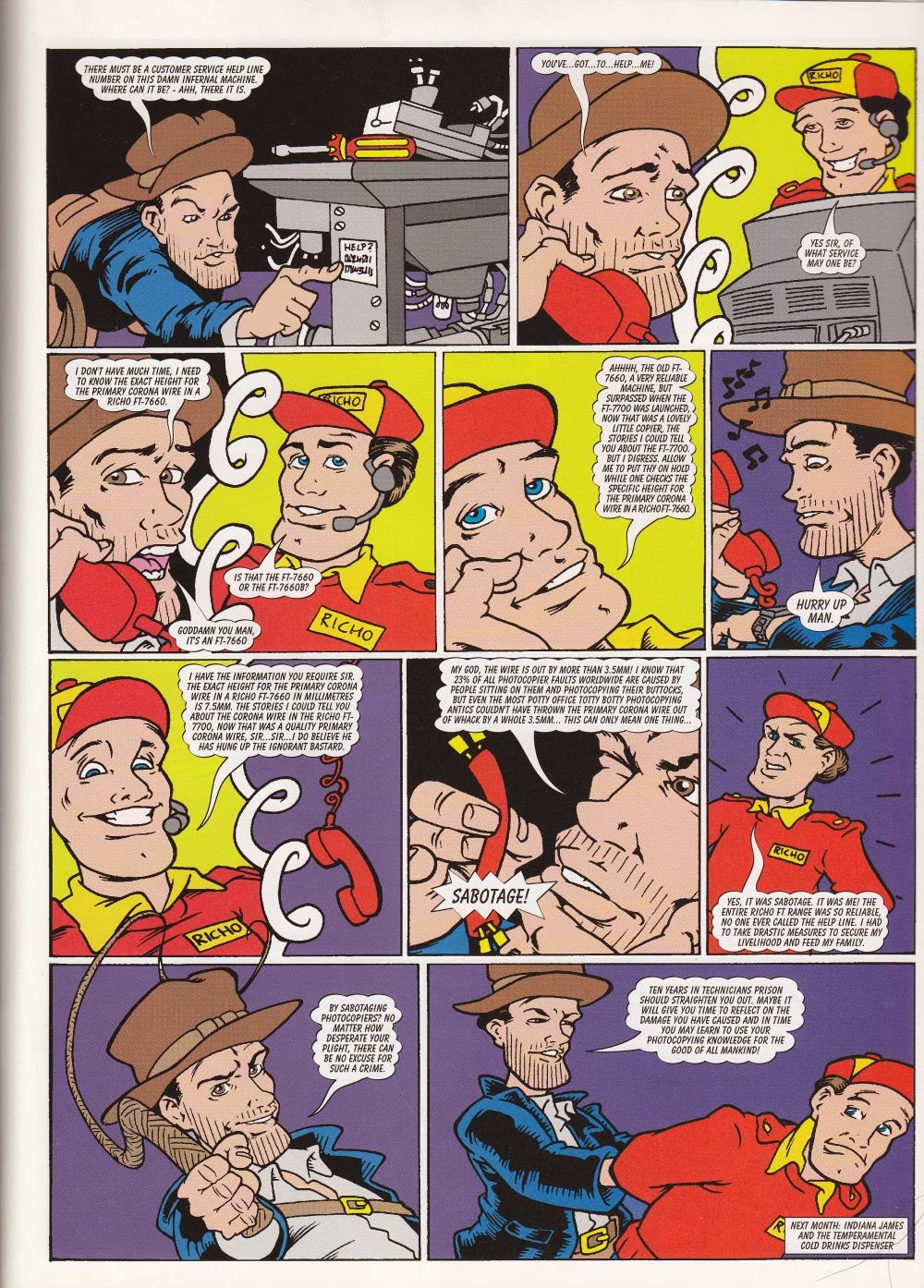 In the "original" version, this was titled Indiana JAMES. That might come up in a quiz one day.

So... Fairly interesting as first issues go, but nothing special. I'm not sure what happened in the intervening issues, but by the fourth one, it's ALMOST like a completely different comic: 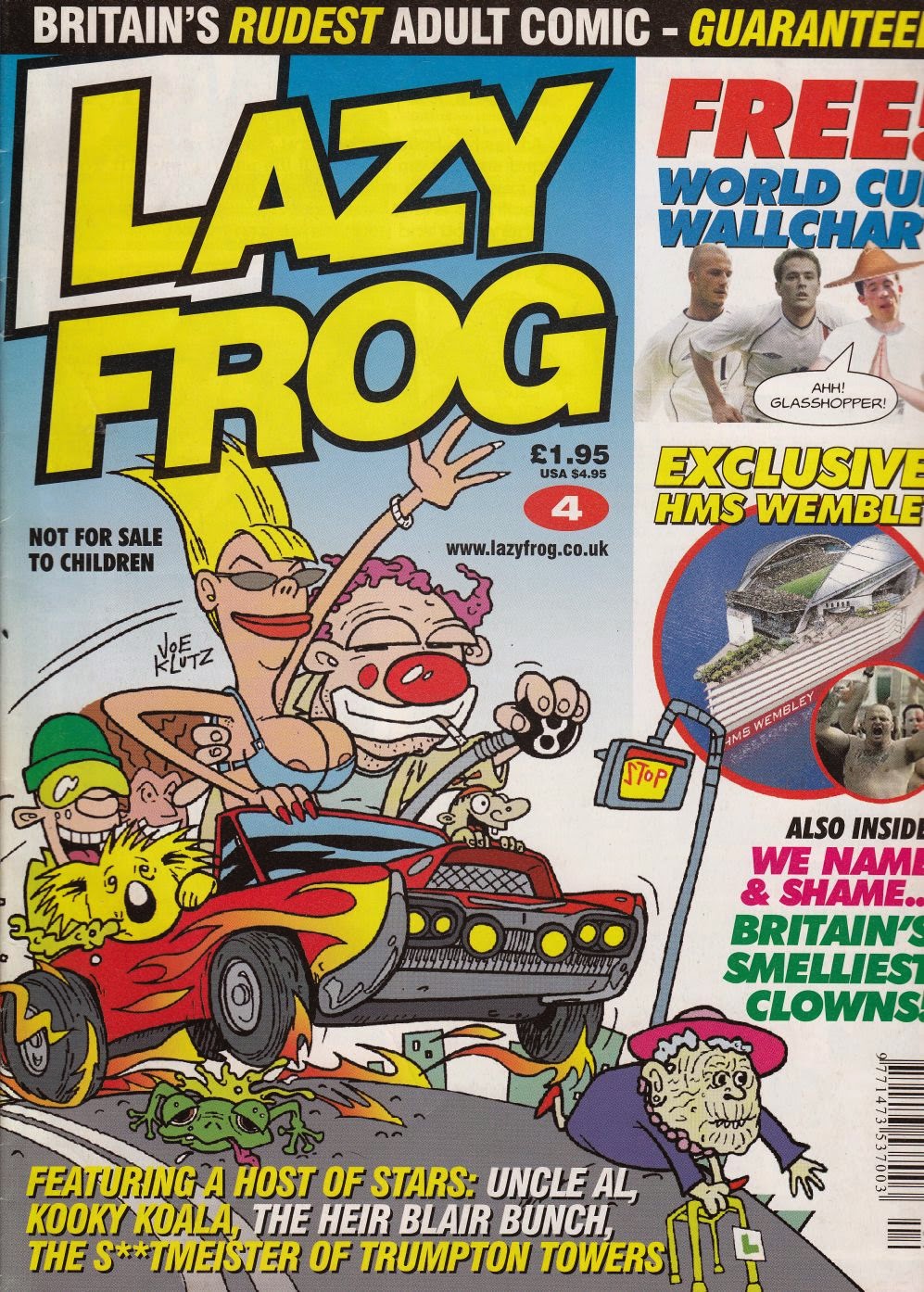 Slightly bigger so that it won't fit under the scanner properly, what a bastard!

It's still got a few bits of lad-mag nonsense (such as the included World Cup wallchart, complete with "flied lice" jokes), but it's also got Shaky Kane giving us freaky-deeky bits like this: 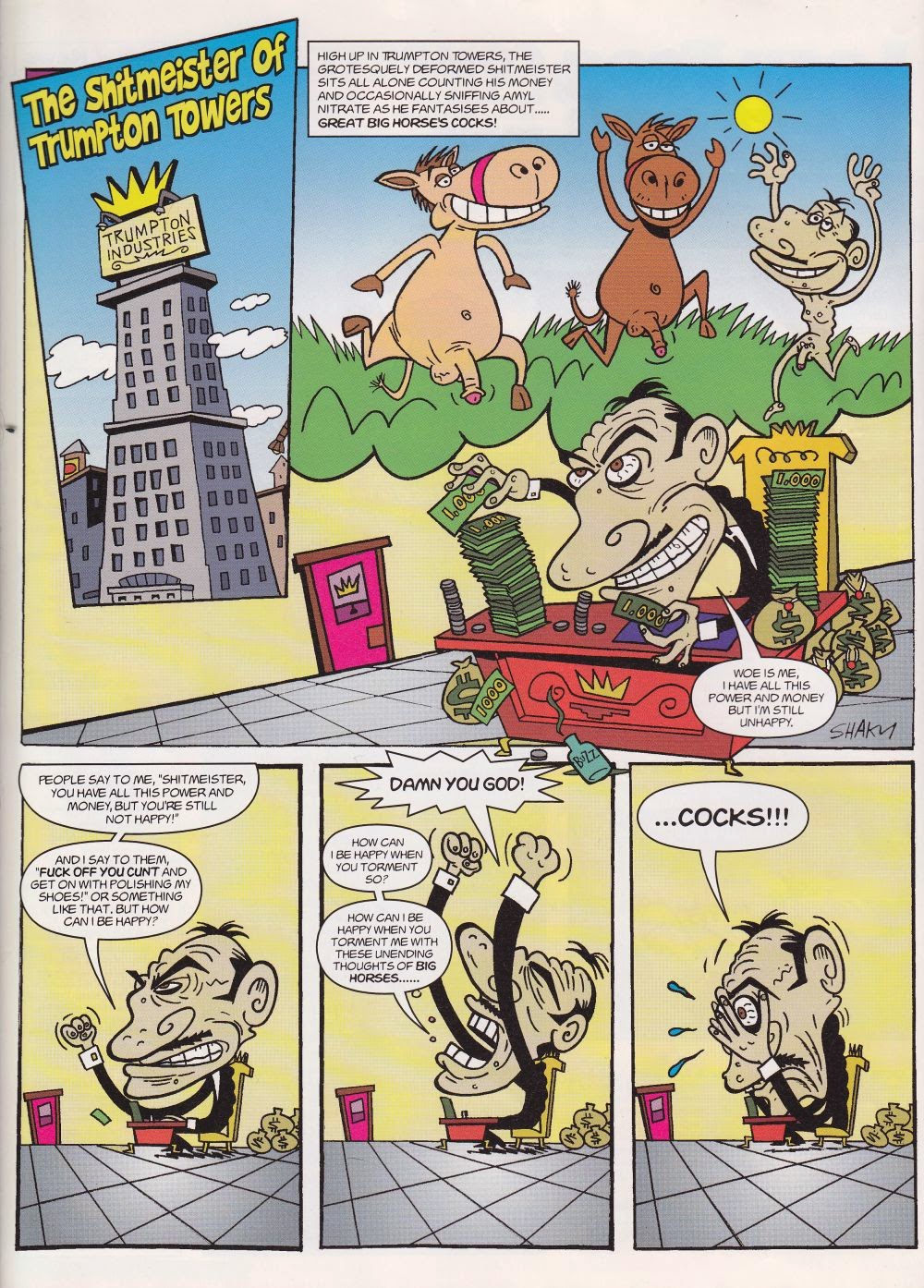 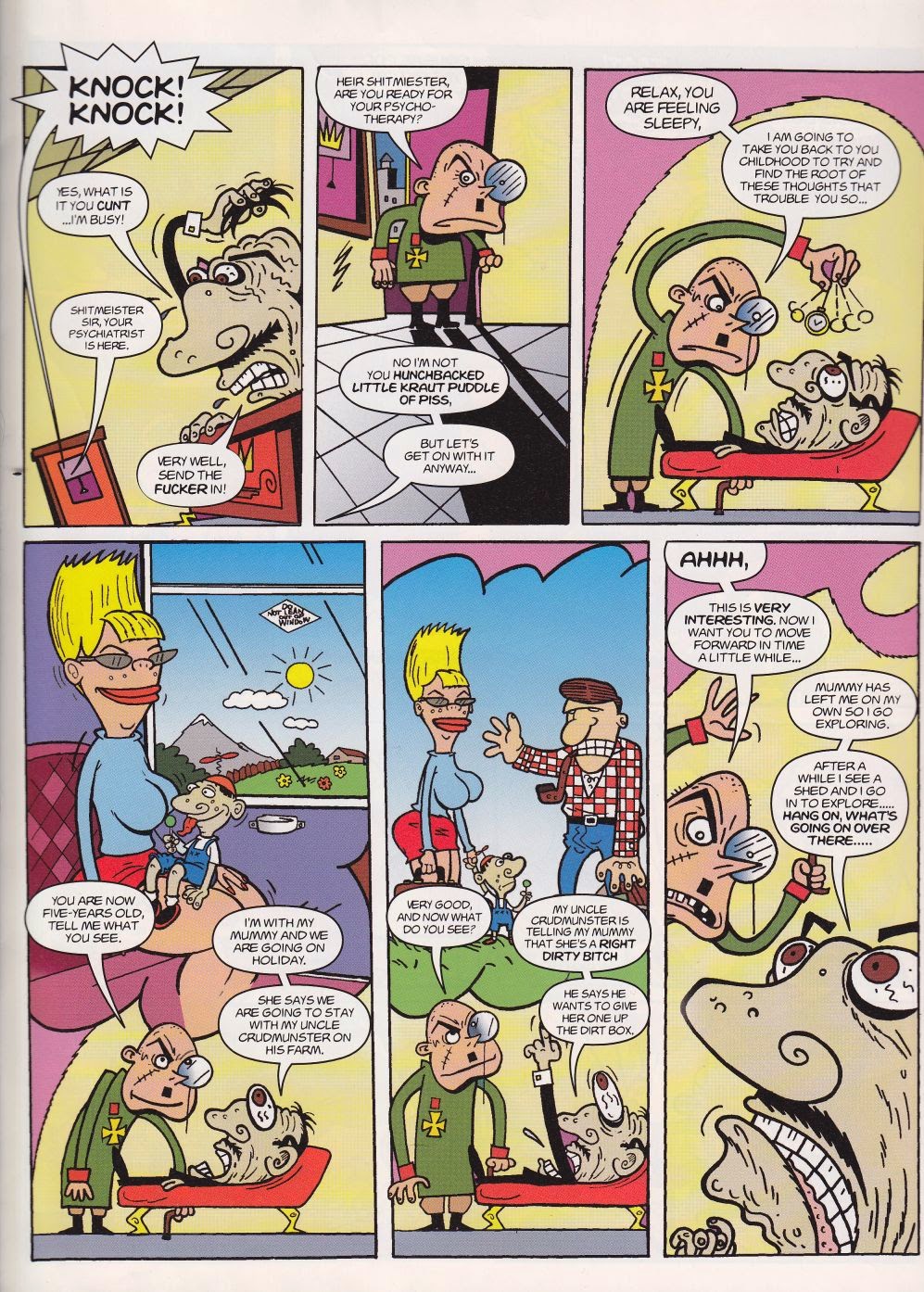 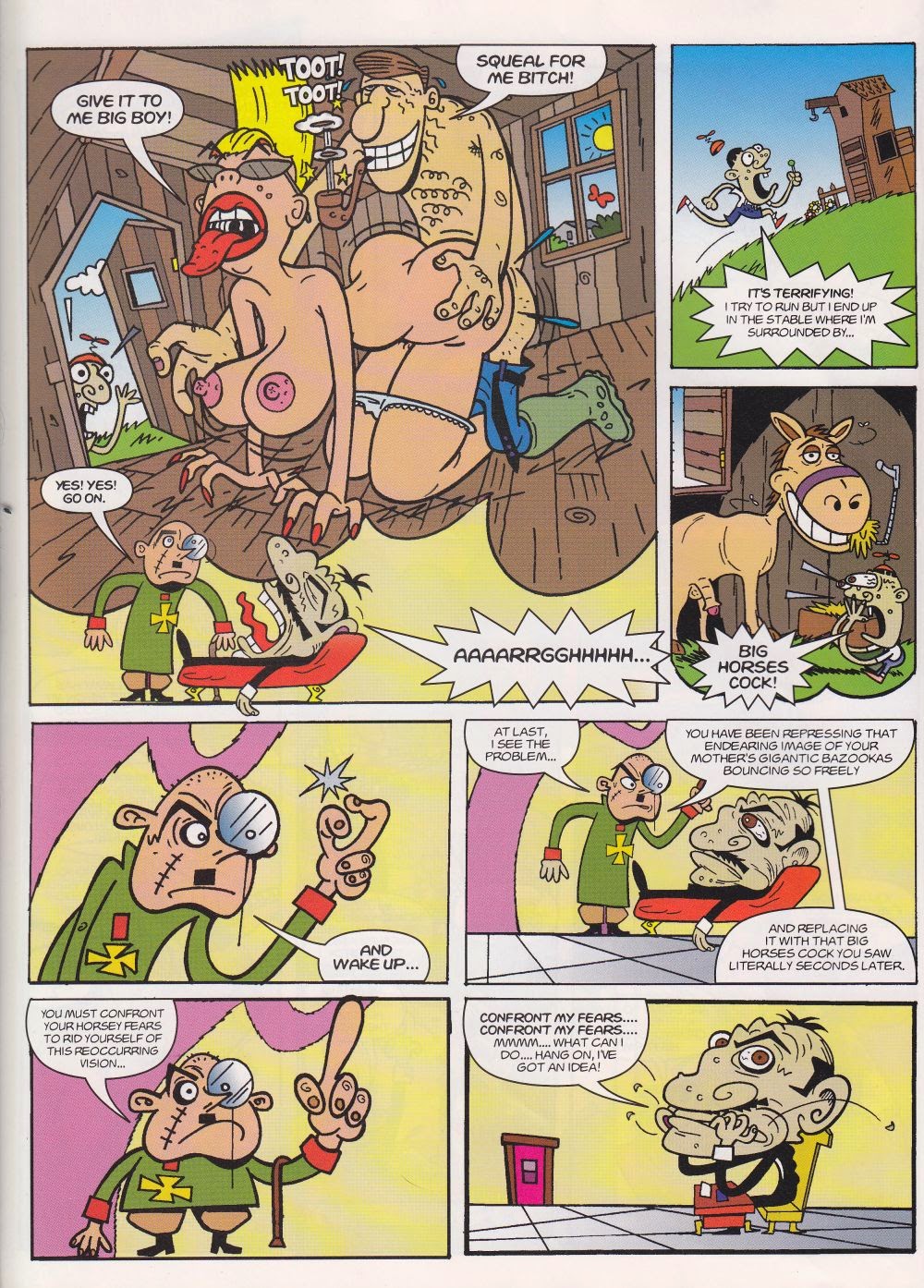 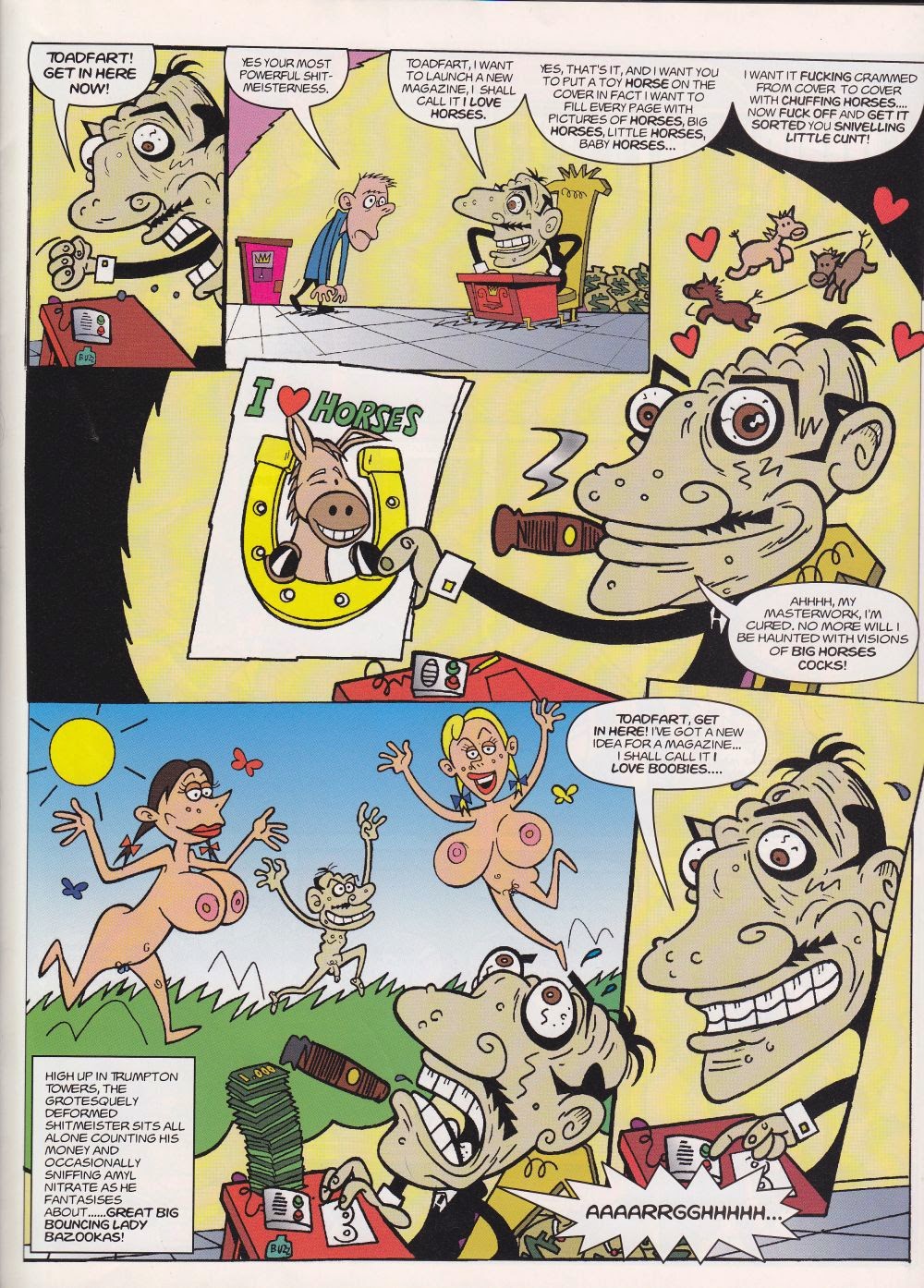 And what else? Some boring drug-humour in the form of Sinsemilla Street (not really worth the effort of scanning), Joey's Bar, in which Joey Ramone runs a bar in Heaven (ditto), and some more "sign of the times" stuff, this time in the form of political satire: 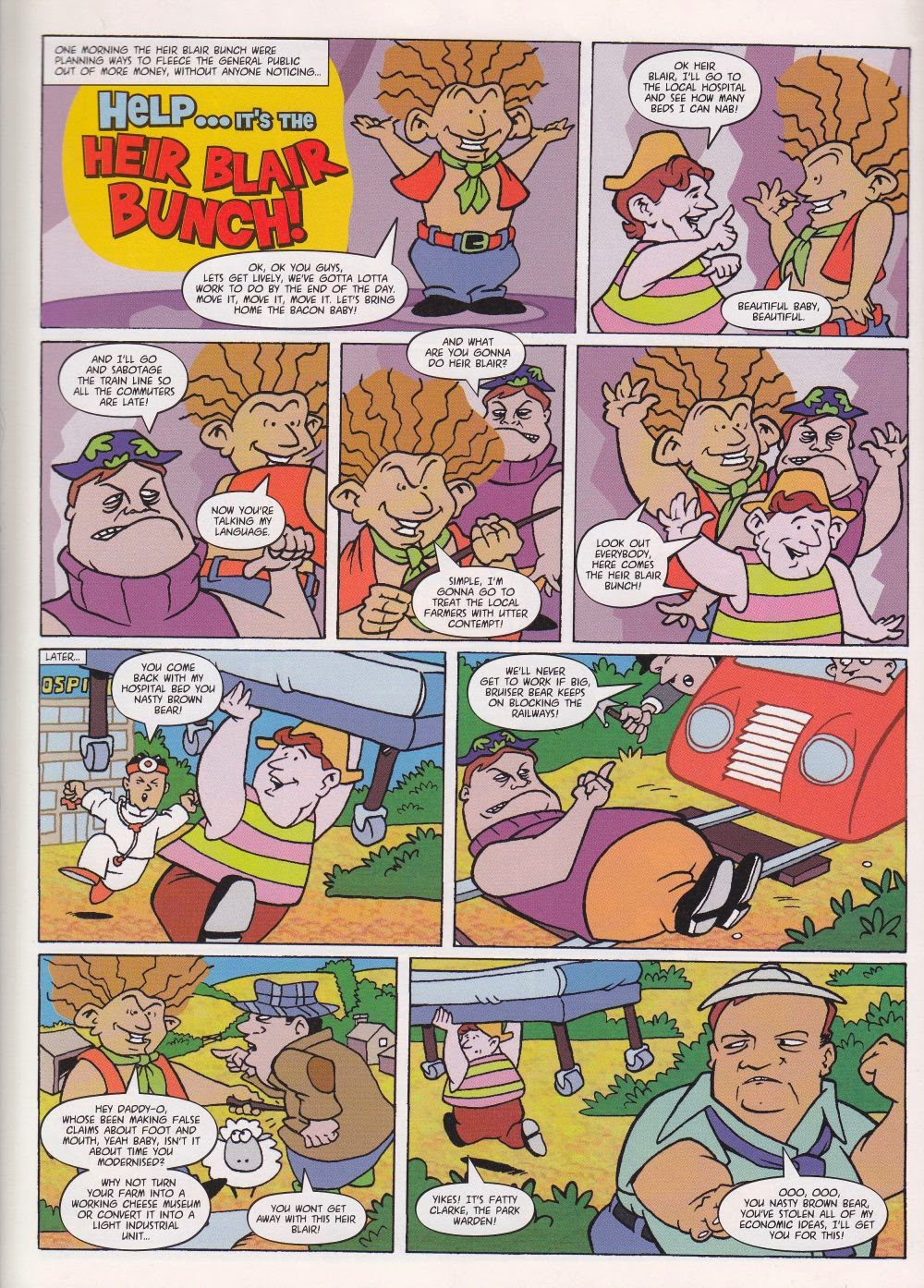 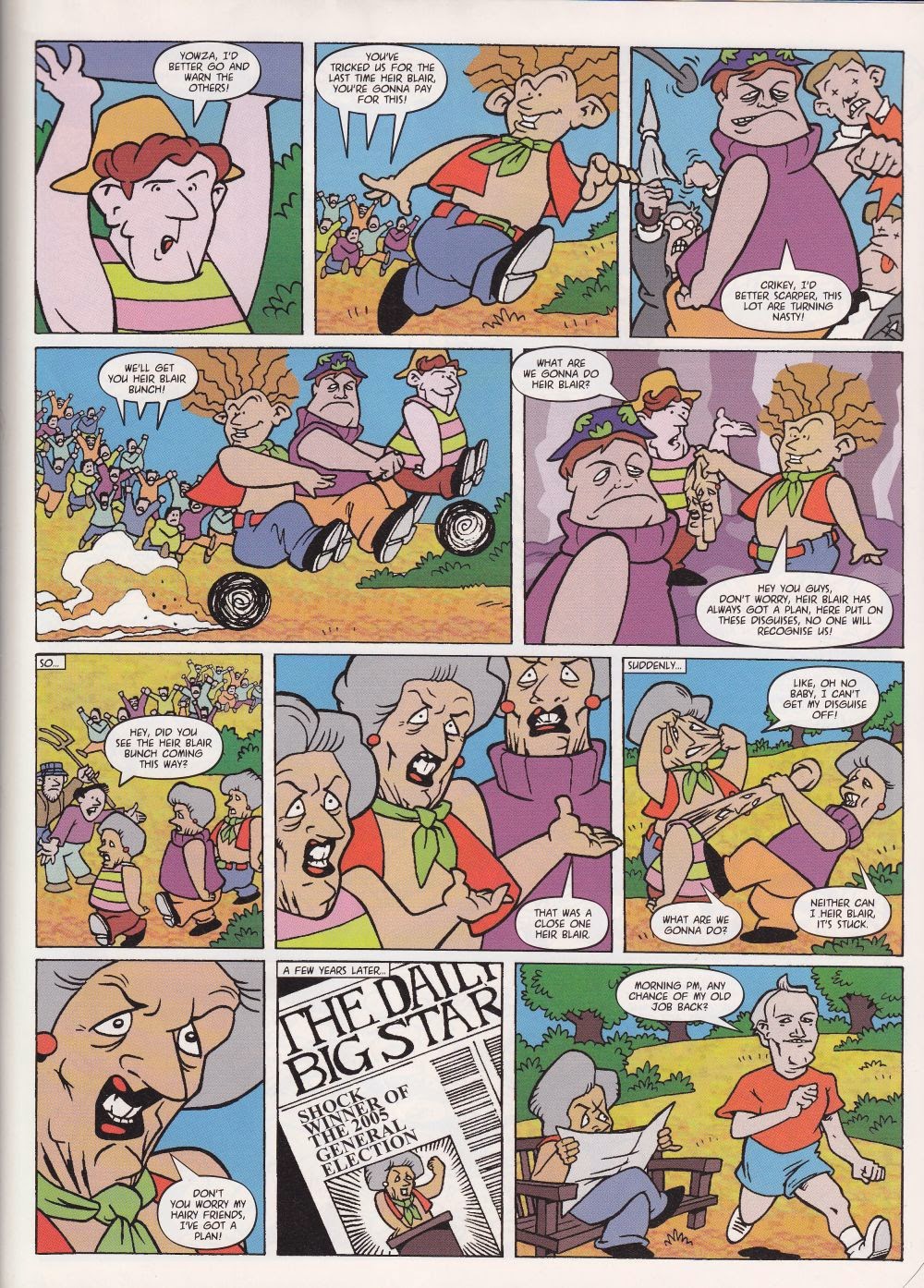 This will be stuck in your head all day now, sorry.

And the continuing adventures of Duff Paddy - notice how the first page of this one is word-for-word identical to his previous escapade, but drawn differently? 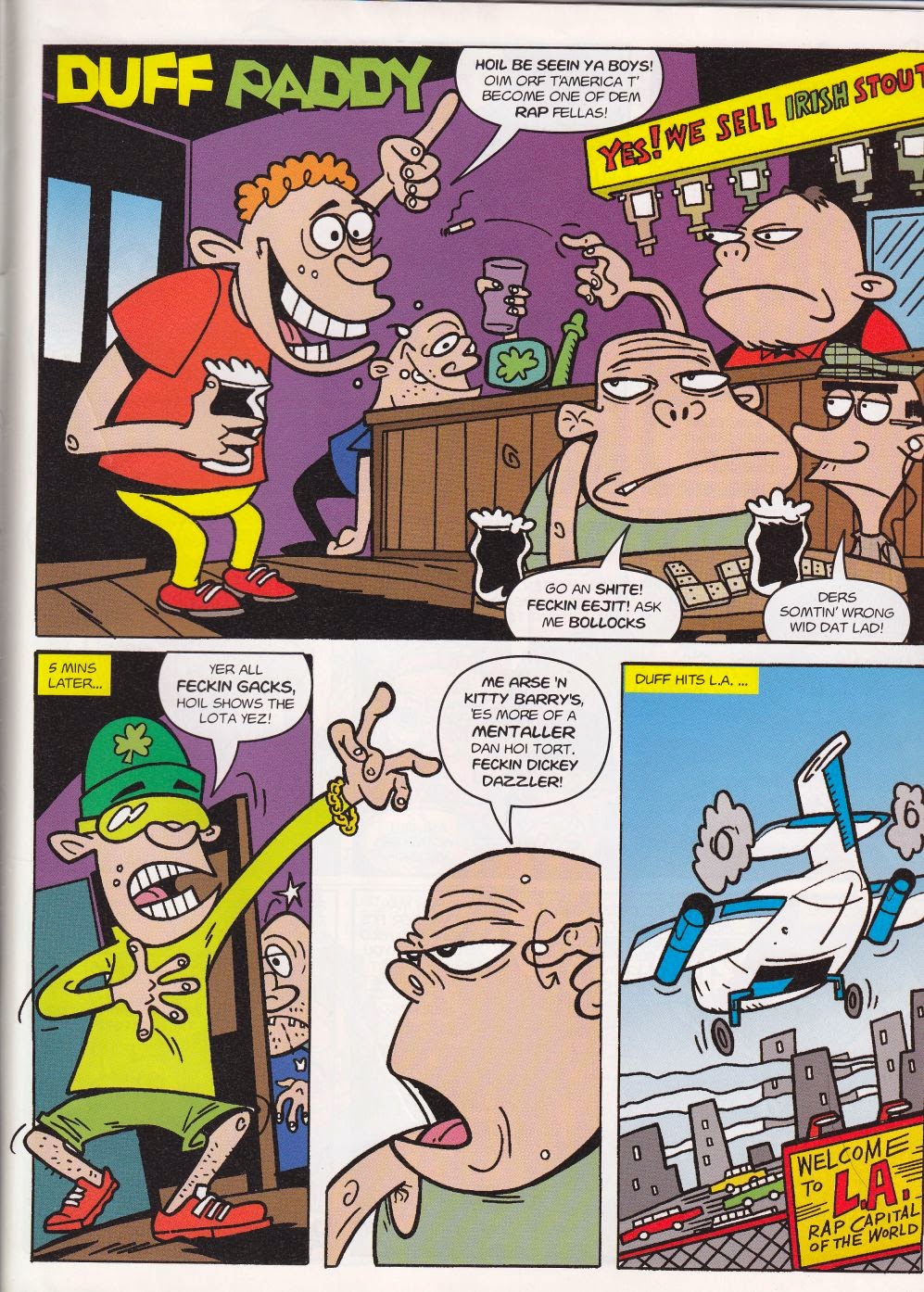 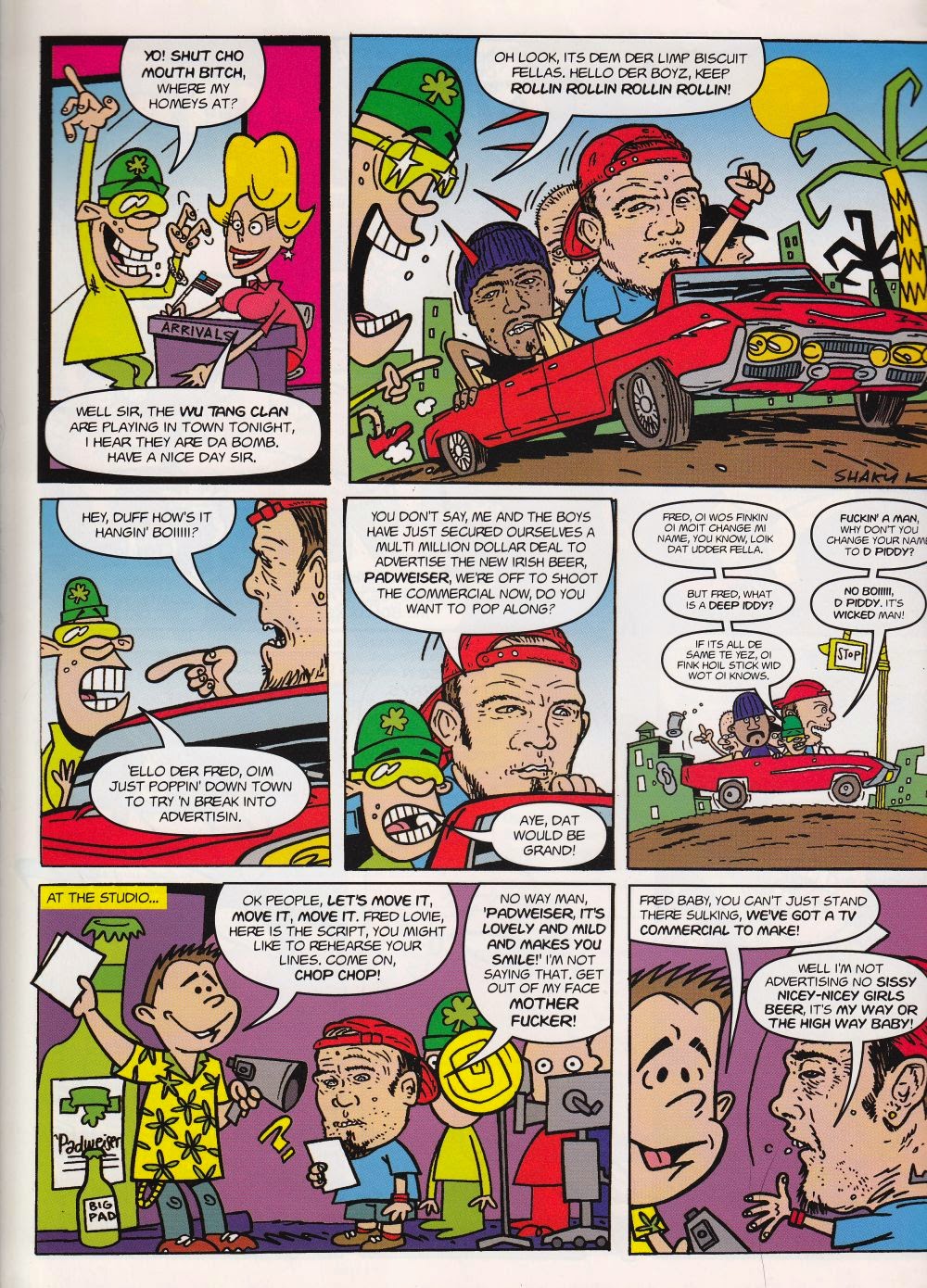 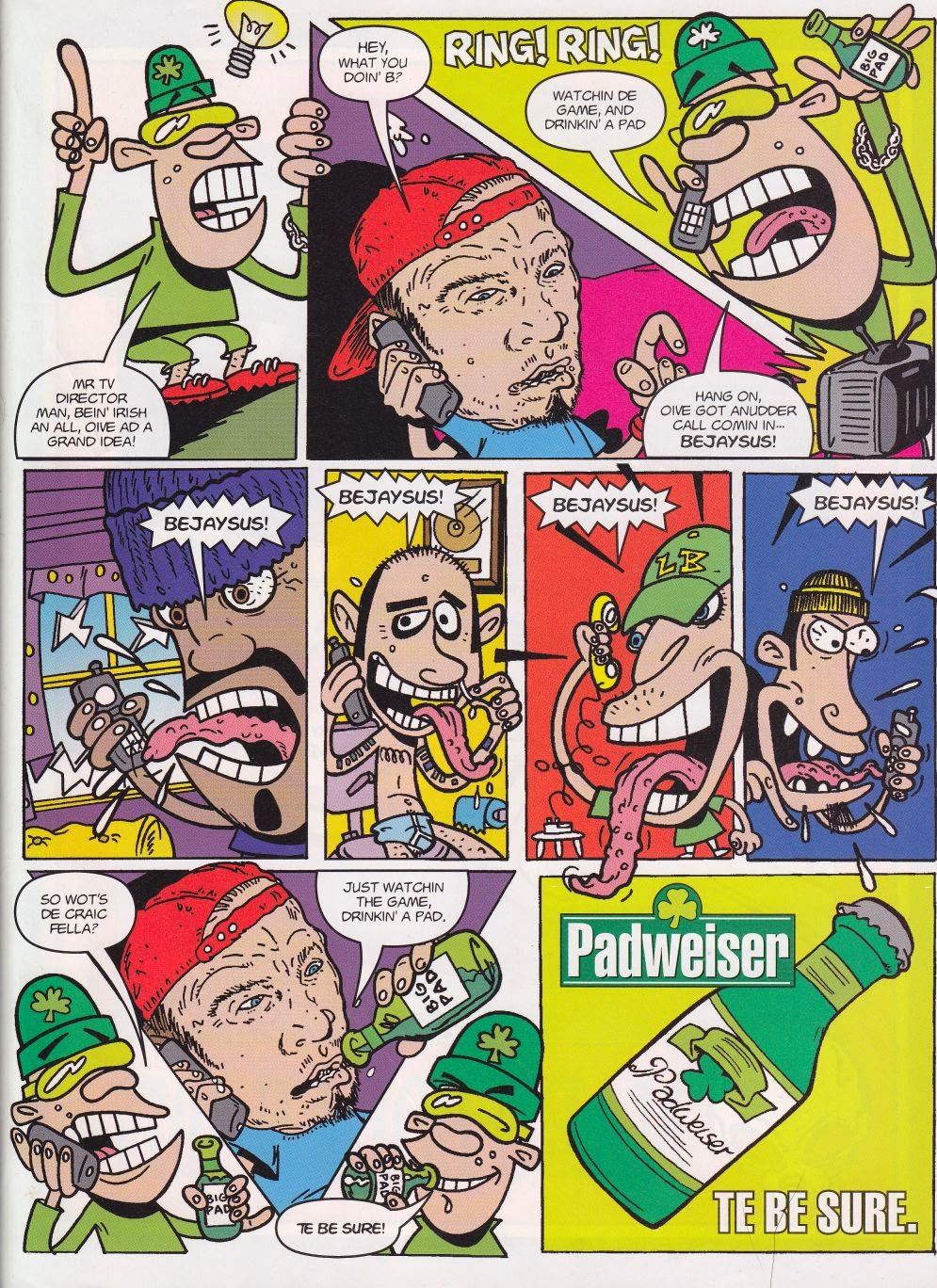 I'd completely forgotten about that horrible advert until reading this again.

And now we come to the SIXTH issue, the one that entertained me for the first half hour of the bus ride home from London all those years ago: 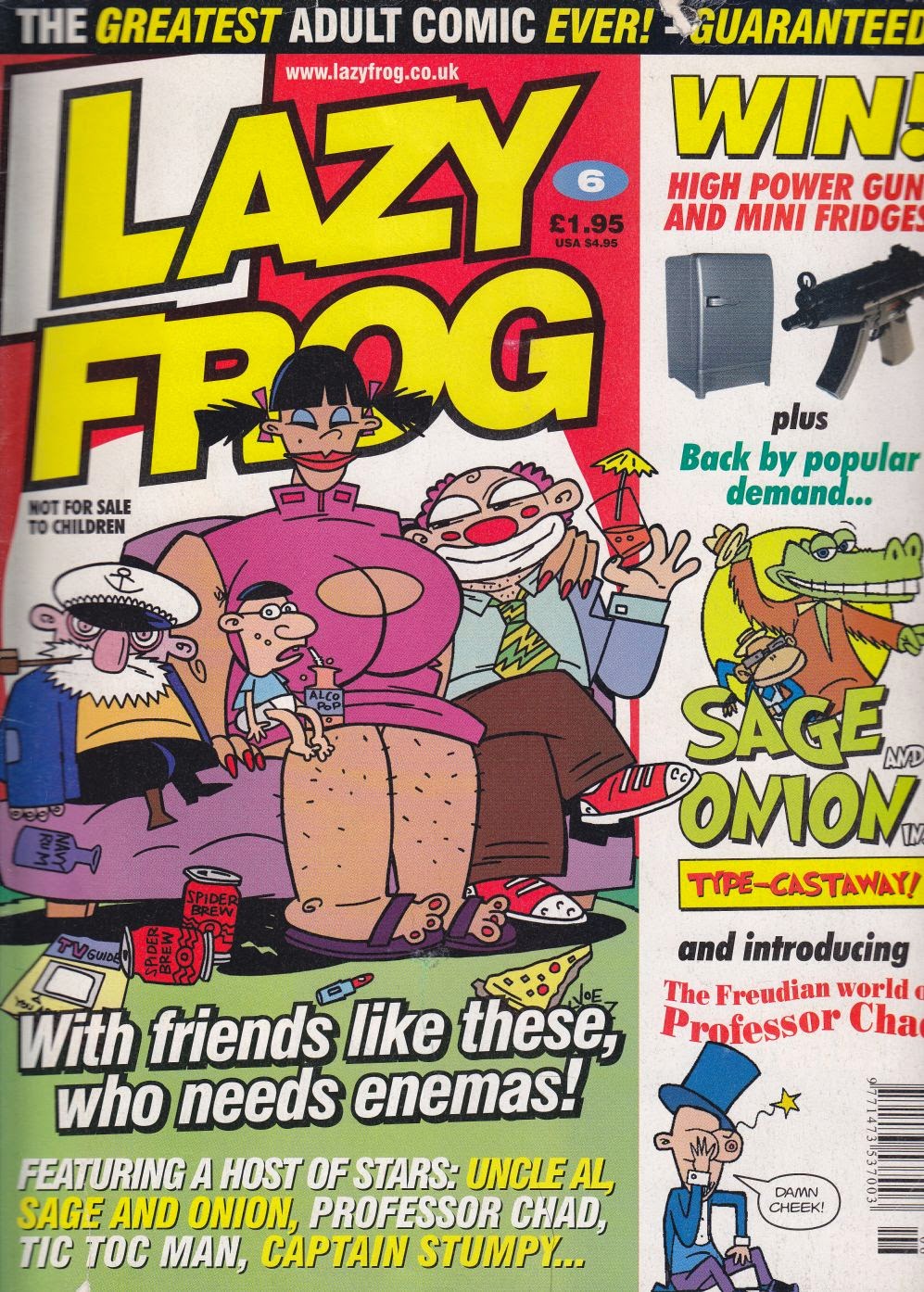 It certainly stood out on the shelf, that's for sure. Lots of high quality (as in, fun to look at, if not to read) stuff in here, such as the Freud-fuelled frolics of Professor Chad: 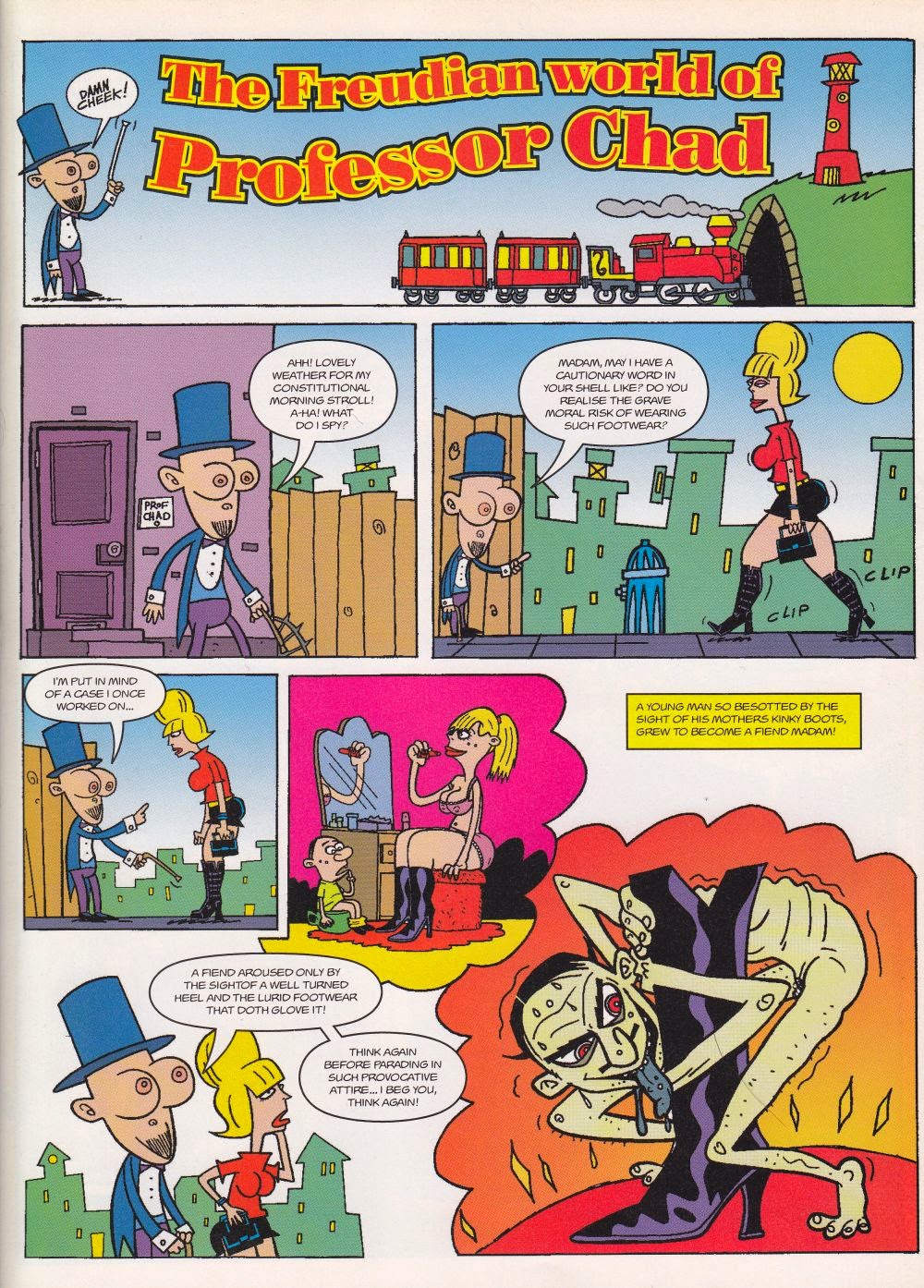 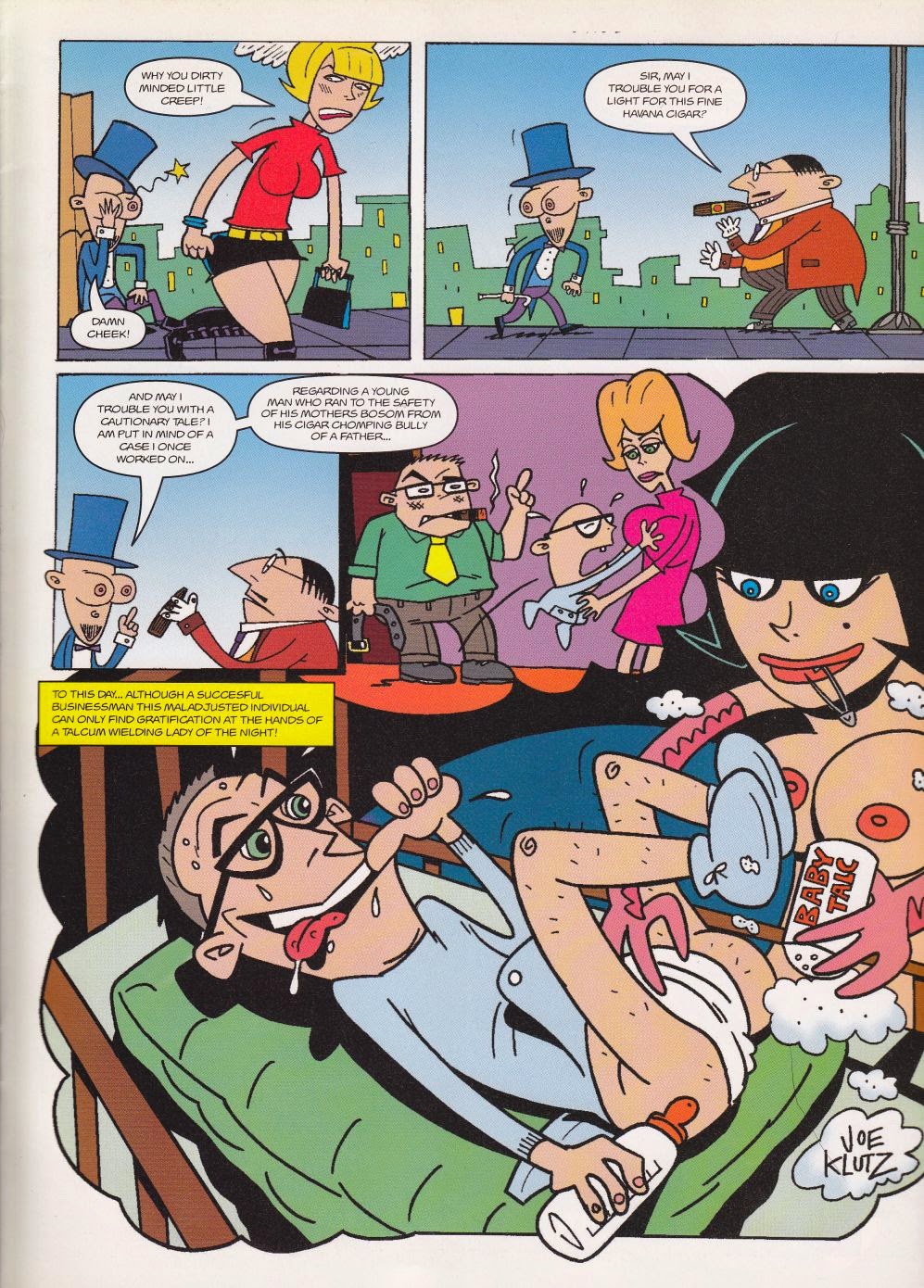 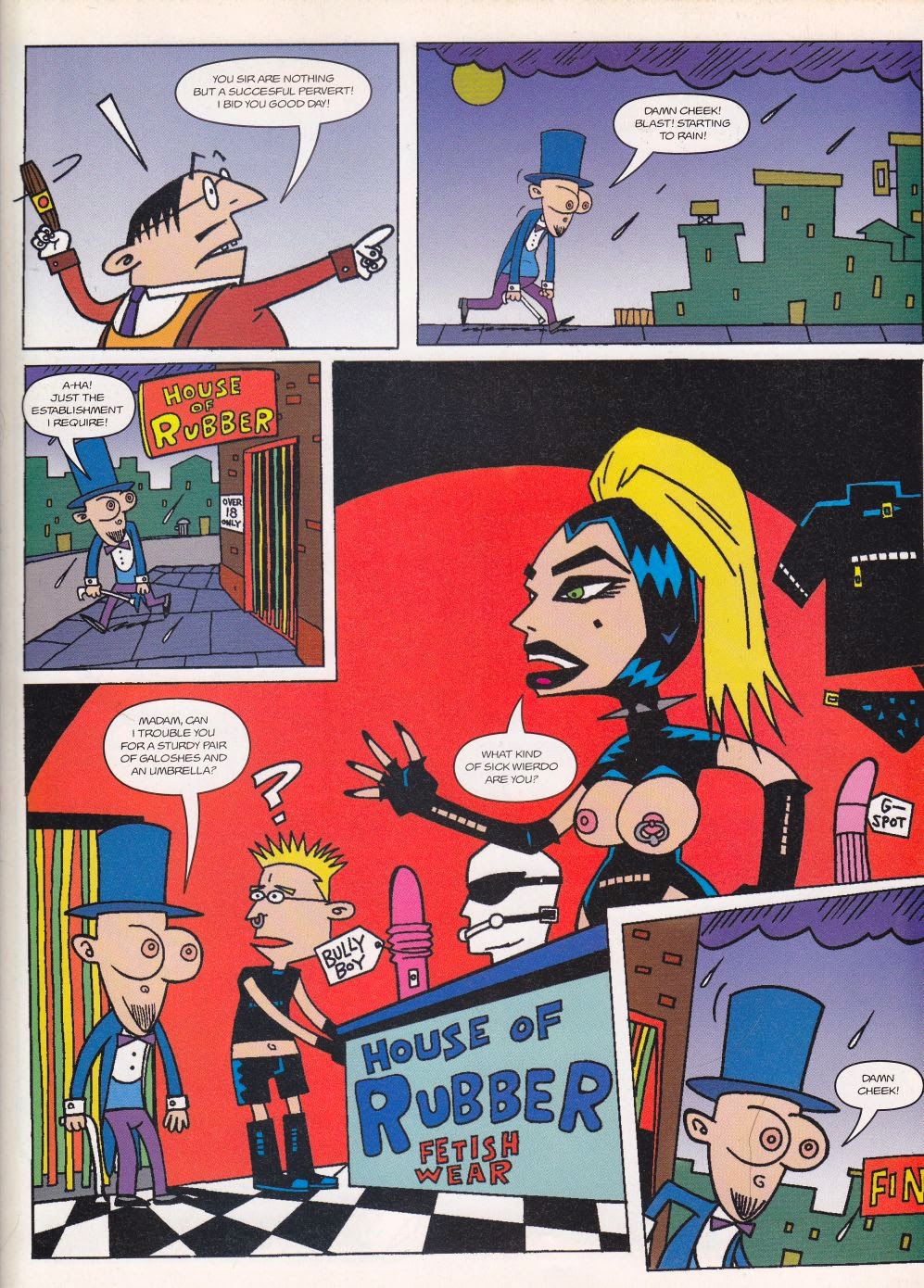 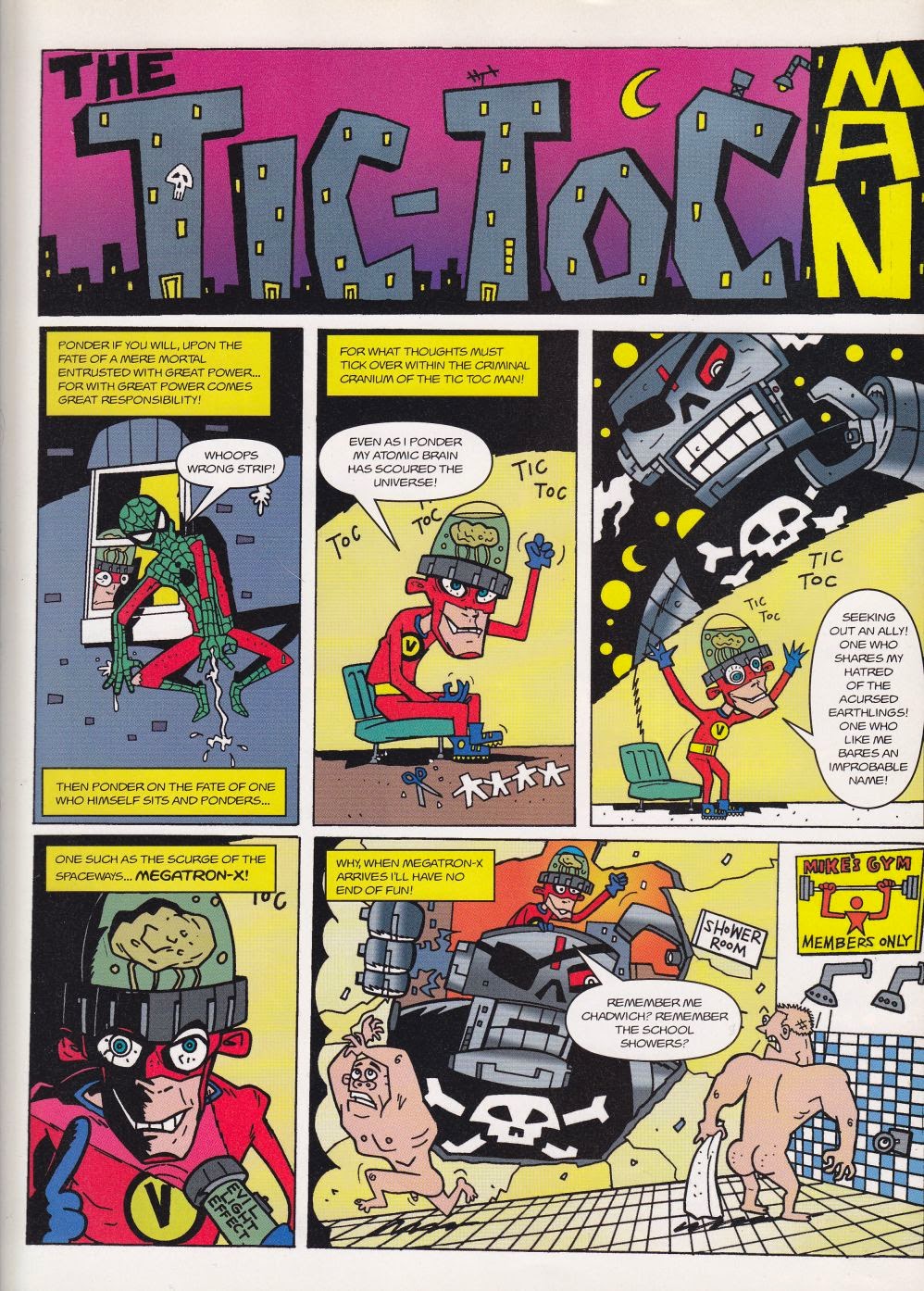 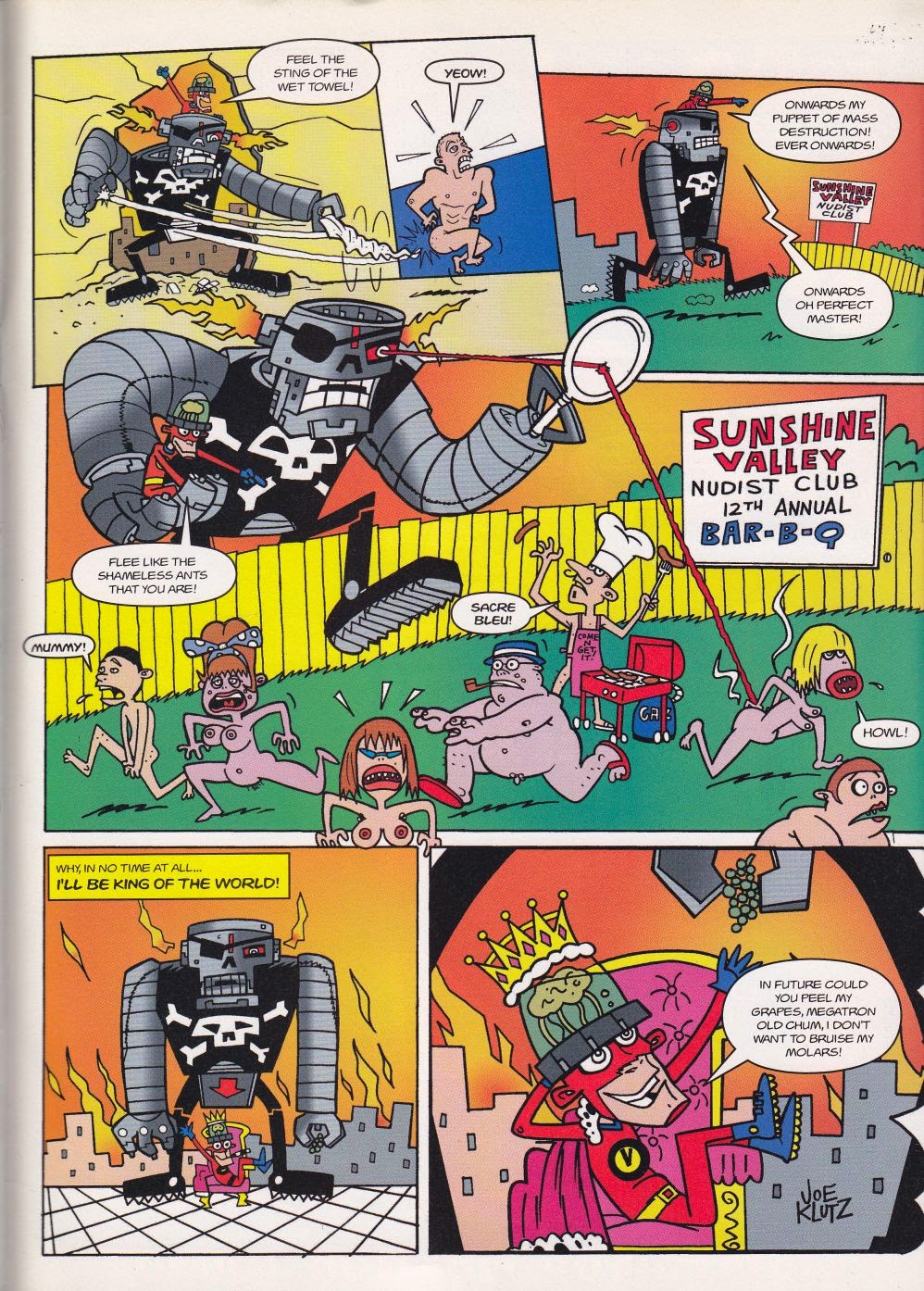 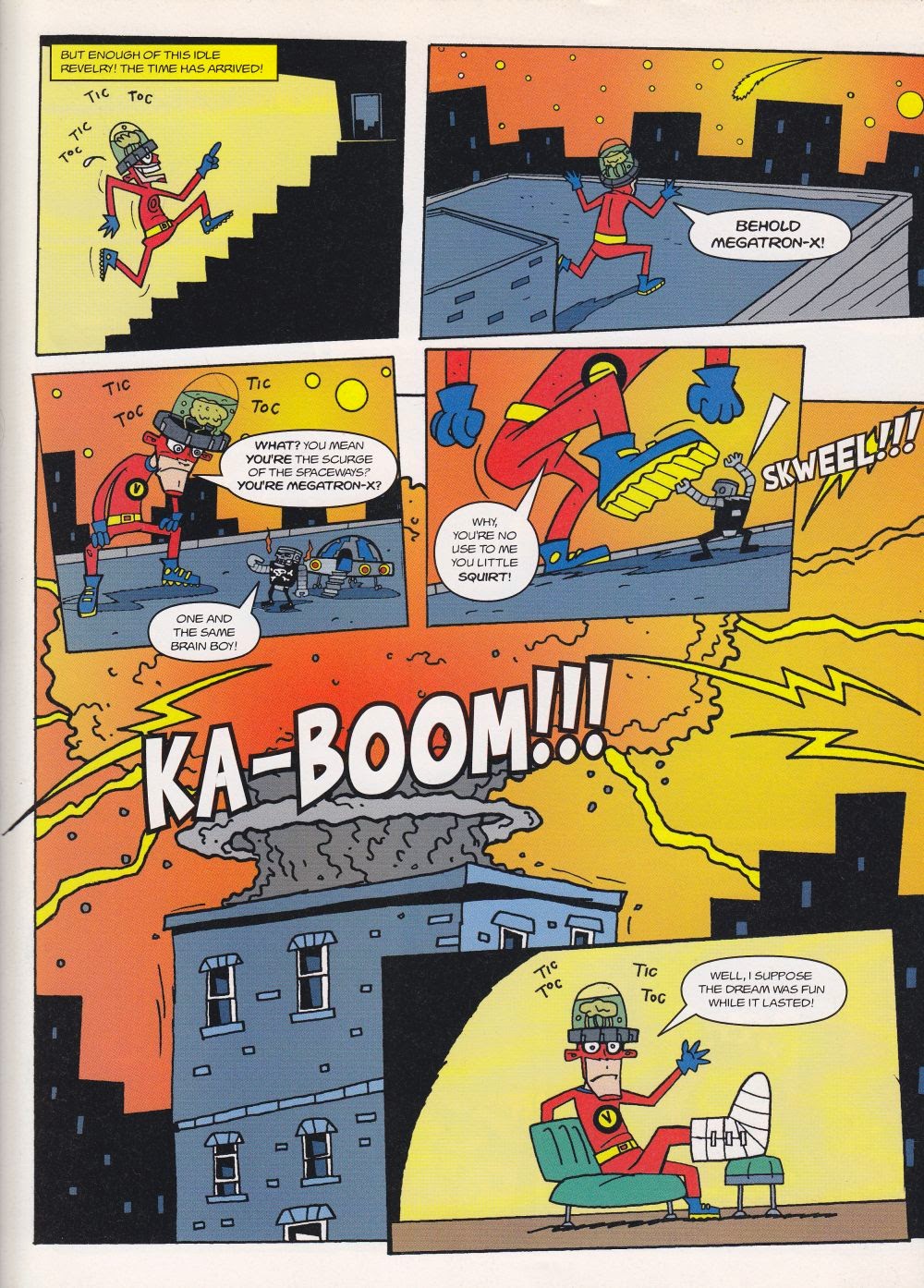 So, Lazy Frog - definitely interesting, mostly for Kane's drawings (mostly under the "Joe Klutz" pseudonym). Not a lot of it's actually amusing, but to sound like a Londoner I'll say it's a visually stimulating tour-de-force if you want. More of this sort of thing will be scanned if anyone's interested, but for now we'll finish with this: 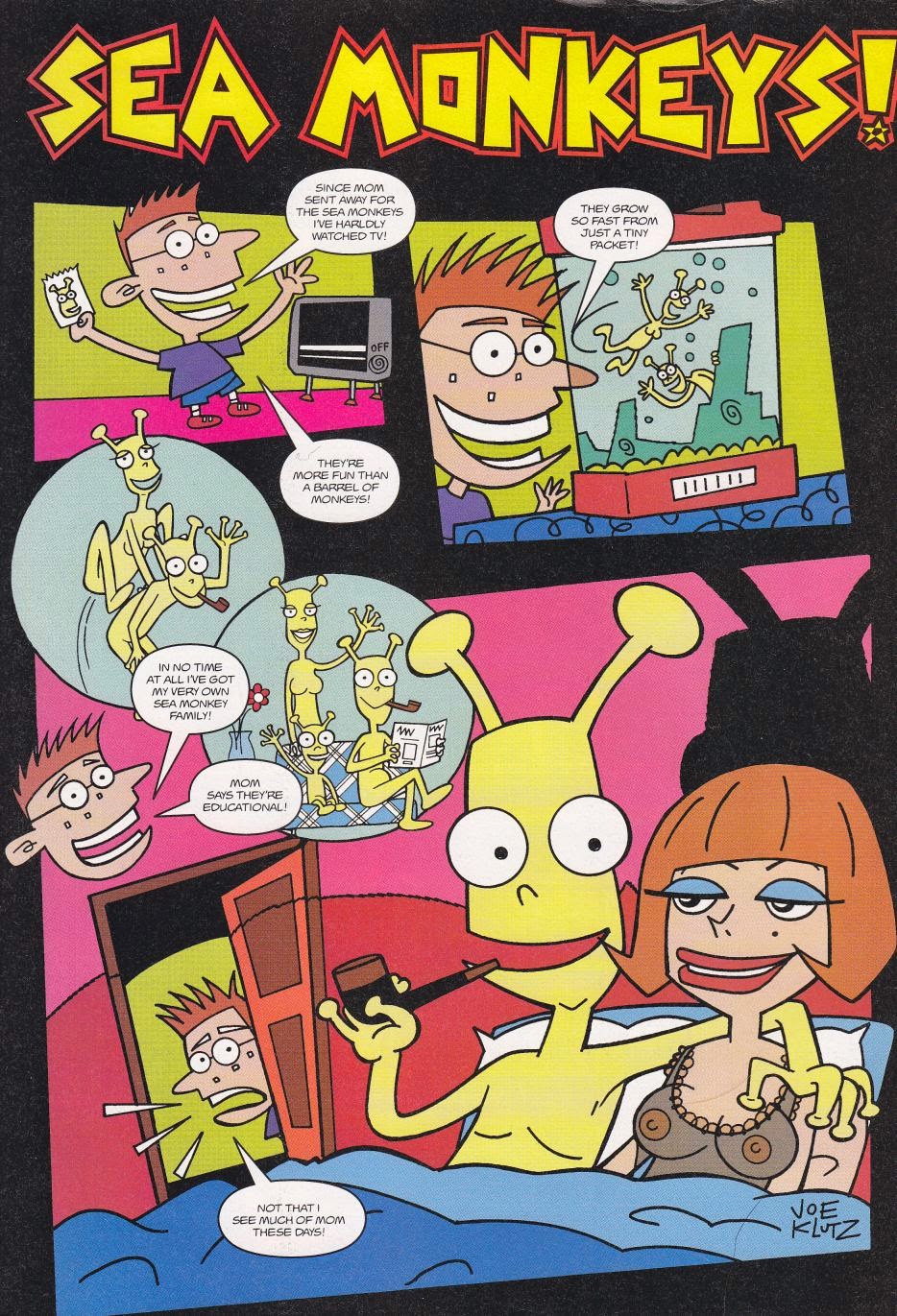