Typical, isn't it? I spend weeks looking through all my stuff for amusing alternative takes on the Beano, spend an evening posting them all up here, then two days later a couple more turn up. Not to worry though, because here they are. And they're both (sort of) the fault of Kev F. Sutherland.

Back in the early 1990s, Mr. Sutherland ran a comic called UT. One of the "regular things" about the comic (and one which may ultimately've led to its demise) was the back cover being an upside-down parody of another comic or magazine, such as Hello!, Shoot or, in this case, The Beano. And a fairly convincing knock-up it is, too: 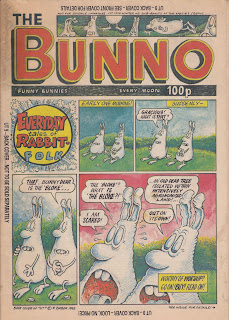 That particular cover leads into a typically surreal (and VERY un-Beano-ish) episode of Funny Bunnies by Phil Baber. Just for the fun of it all, here it is: 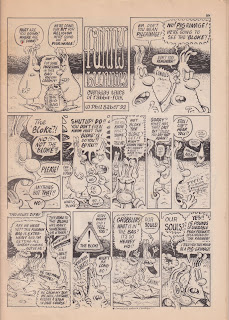 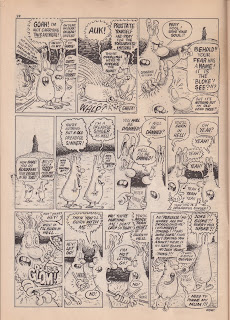 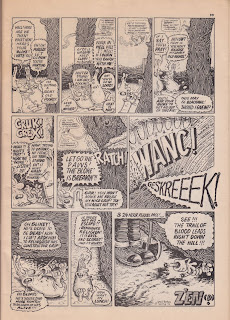 The next item is also from a Kev Sutherland product (and POSSIBLY drawn by him too). It's from the first issue of Zig and Zag's Zogazine, a comic based on that puppet duo (obviously), with each issue following a loose theme. For the first issue, that theme was comics, and one of the features is this nice spread, titled Zig and Zag's Wacky World of Comics. Not only does it feature a Beano spoof, it also satirizes The Dandy, The Topper, 2000AD, Action Comics, The Fantastic Four, Eagle, The Amazing Spider-Man and even Viz! 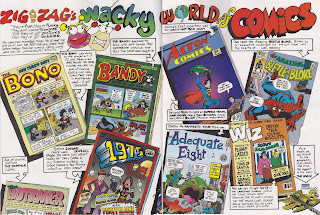 Click on it to read it "properly", of course.