Here's a video I took of them this morning, whilst they ate their bi-daily meal:

Cute little buggers, yes? Most people think of the albino variety when they're picturing axolotl, but mine are more of a blue-ish grey - same as like you'd find in the wild. As can be seen, one of them's fat, and the other's thin. I've no idea how to tell, but I think that the fatter one's a male, whilst the other's female. Just guessing, mind.

They're really easy (and cheap) to look after, ideal for someone who's hardly ever at home. No heated water required (room temperature's fine, as long as it's been treated with Tapsafe); not much cleaning required (the pump does most of the work, just need to change the filter every other week - a snail or two help with clearing the algae from the tank walls); and they live off bloodworms (mosquito larvae, that's what that squirming mass of red stuff is in the video).

Apart from the initial cost of the tank and the filter, and the acutal axolotl themselves (£20 a pop), they're only costing me £2.50 every 24 days. That's the cost of a tray of twelve cubes of frozen bloodworms. Every other day, just plop a cube into the water and it instantly melts, dropping worms all over the place.

The axolotl themselves are usually docile, and spend a lot of time sitting on the bottom of the tank. They go mad if there's any food about - as soon as a cube's dropped in it's like they're smelling blood and instantly start swimming around looking for their dinner. 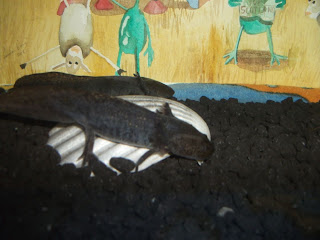 So far, so goldfish, except they seem to be aware of the world beyond their glass walls. I've got one of those tip-upside-down-desk-toy things - you know, a tube with gloopy liquid in it, and when you tip it upside down the liquid slowly flows down the inside of it? Well the axolotl like to watch that happen, the skinny one in particular. Piano music seems to make them swim around a lot, the fat one will follow my finger if I move it slowly left to right, and if I'm sitting near their tank long enough, eventually they'll both end up facing me. Oh, and when their filter's changed - they both look up to see what's going on when I remove it and put it back. Nice.

That black gravel in the tank's not supposed to be there. Apart from the fact it makes it hard to see the creatures, it's also dangerous for them. The guy in the pet shop said it was fine, but the Internet says otherwise. Says they can swallow it and die, so I've been slowly removing the gravel whenever I feed them. It's taking a while, obviously.

They're also camera-shy and people-shy. They'll swim all over the place when it's just me there, but mostly just sit there if other people want to see them. I know they're not performing animals, but still... And if they're suddenly doing something photo-worthy, they'll stop it the second I get the camera out. FOR EXAMPLE, one of them was sitting on top of the plastic plant I put in their tank. So I got out the camera, and as soon as it was ready the axolotl immediately jumped off: 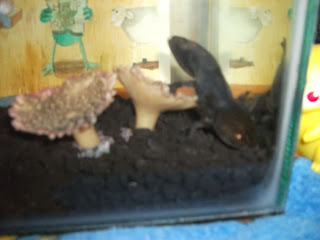 Ooh, the little sod! Animal photographers are the most patient people on the planet and all deserve a slap-up feed.

Lots more (actually useful) information can be found at the definitive axolotl website, an invaluable resource!
Posted by TwoHeadedBoy at 7/28/2012 12:36:00 am