Christmas... The time of year when you just want five sodding minutes of peace and bloody quiet to yourself, and traditionally there's no better or easier way of putting that message across than burying yourself in a big fat book. I did a similar post to this a few years ago, but here we are in an odd moment of motivation, and so it is - the "best" books a comic-liker could hope to find themselves reading over the festive period and beyond. 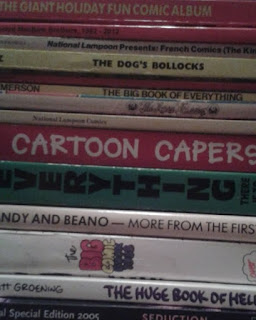 Apologies for this terrible picture - my camera's died, so this is the best my phone can offer.

The majority of these books can be found for a few pennies on Amazon Marketplace, but some of them you might have to look a bit further for... They're all definitely worth it though (if you like this sort of thing). 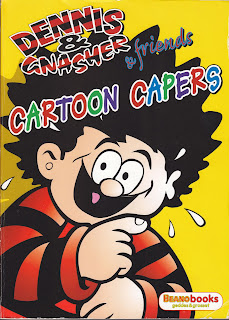 Don't be put off by that cover - this is over 300 pages of classic DC Thomson stuff, essentially a phone book-sized version of the much-missed Classics from the Comics. Further scrutiny tells me it's actually the first dozen or so issues of said publication, all stuck into one big book. Piles upon piles of strips culled from The Beano, The Dandy, The Beezer, The Topper, Sparky, Buzz, Nutty and Cracker, can't go wrong with these.

Similarly, you can't go wrong with the Fleetway/IPC equivalent - that is, any of the Big Comic Book annuals: 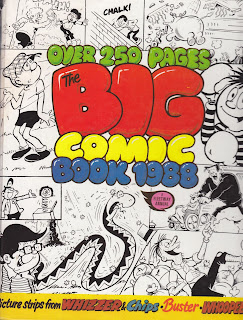 So big it hardly fit under the scanner!

There's seven of these to choose from, ranging from 1987 to 1994 but they're all essentially the same deal - 200+ pages of Ivor Lott & Tony Broke, Faceache, Shiner, the Bumpkin Billionaires, Store Wars, X-Ray Specs, Beat Your Neighbour, Frankie Stein, Lolly Pop and so on. They could still be publishing this annually today and they wouldn't've run out of material yet. 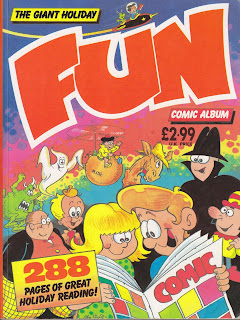 Compiled by Mike Higgs in 1989, the print quality's not the best but it's still readable, and it's dense with quality, mostly picked from the Odhams comics (Smash! and Wham! and Pow!) and a fair amount of earlier IPC stuff too - you get four complete serials of Higgs' own The Cloak (as well as Space School), roughly half of Ken Reid's Queen of the Seas (that's 48 pages worth right there!), a few more bits of Reid (The Nervs and Frankie Stein), Denis Gifford's Steadfast McStaunch, Leo Baxendale's Eagle-Eye Junior Spy, Wee Willie Haggis and Bad Penny, some considerably older stuff in the form of Billy Bunter and Laurel & Hardy and some more recent stuff, like Dave Mostyn's Kids' Band Radio (now THAT's a product of its time). There's also giant holiday albums in Adventure, Fantasy and Girl flavours, but they're of no interest around these parts...

Viz: The Dog's Bollocks is next: 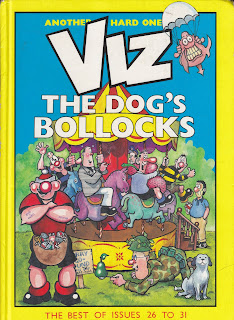 There's still a Viz book every year, but no-one can deny now that the old cliché of it being "Not as funny as it used to be" is definitely true nowadays... The Dog's Bollocks is arguably Viz at its peak - when Simon Thorp was still drawing people that looked like ventriloquist dummies. Highlights include Mike Smitt - He's a Patronising Git, Tubby Tucker - The Big Fat... Person, Ivor the Skiver - His Dad's a Bad Driver, Jelly Head by Charlie Higson (of all people), Careless McKenzie, Jeremy Futcher - His Dad's a Butcher, Norman's Knob, Desperately Unfunny Dan, The Three Chairs, Luke O'Like, and that time Mr. Logic tried to get served in the pub.

Another one that's still published every year is DC Thomson's archive series - which "back then" was known as Dandy Beano: 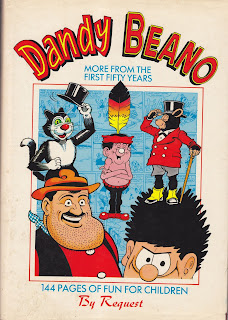 More from the First Fifty Years was the second of these books published, in 1989, and personally I'd say it's the best of the lot. There's separate sections for comics concerning the Wild West, World War II, Easter and Christmas, as well as a few other "features" - such as Dennis the Menace's appearance on Terry Wogan, pictures of the clothing range that was available at the time of press (I'd love one of those Calamity James jumpers), that time that Mr. Mad from the Steve Wright show appeared in The Beano, a load of pictures of the various free gifts that the comics have given away over the years, an odd thing about how Desperate Dan "predicted" the Channel Tunnel... Yeah, bit of a beauty, this one.

Something a bit more contemporary now: The Bash Street Kids in Space Cadets. 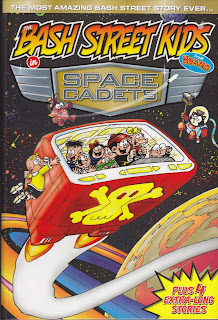 Mike Pearse got it exactly right when he was tasked with "re-imagining" a load of widely-loved comic characters - he gave the Bash Street Kids a more "European" look and fleshed out each of the kids with bigger personalities than ever before (for example, Spotty is now an Eric Cartman-type rather than "child with spots"). The stories are longer too, often taking up a whole issue of the Beano. For the 2009 Bash Street Kids annual, the whole book was given over to five of Pearse's stories - there's a Star Trek parody, a Harry Potter one, Pop Idiots (as in, a Beanotown talent show), A Funny Old Game in which the kids take on the rest of the Beano cast at football, and a sweet story in which Teacher realises he no longer knows how to have fun, and the kids resolve to enjoy it while they can... It's the Bash Street Kids as you've never read them before (unless you've already read this lot). 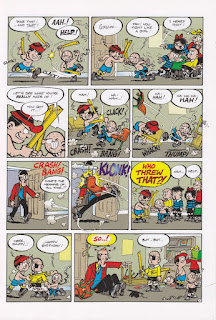 See what I mean?

The Big Book of Everything, by Hunt Emerson is... No where near EVERYTHING, but there's still a lot in there. 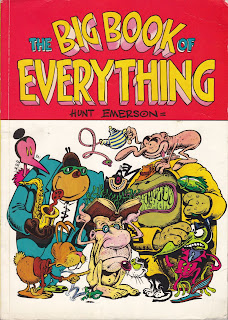 This 100-page collection from 1983 includes material that had previously appeared in Streetcomix, Knockabout, Eclipse, Yikes, Brainstorm, Warrior, Moon Comix, Commies From Mars, Escape, No Ducks, Fortean Times and Graphixus - with plenty of Calculus Cat, Max Zillion, and Alan Rabbit in amongst that lot. The highlight here is, by my reckoning, The Underground Lighthouse, a wartime yarn told in the way that only Emerson can.

Also of the "all-done-by-one-person" variety is The Huge Book of Hell, by Matt Groening: 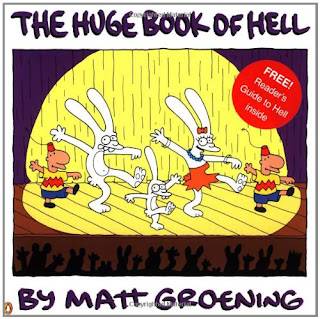 Picture stolen from Amazon, due to this huge book being too huge for my not-so-huge scanner.

When this showed up on my 12th Christmas, I'd never read any of Groening's Life In Hell comics, but was familiar enough with the characters (seeing them on various calendars and mugs and so on). The stuff in here's a seemingly random collection of pages from 1984 to 1996 (Life In Hell itself lasted from 1977 to 2012) - it's often depressing but in the "right" way (think the self-reflecting despair reading the Adrian Mole books gives) and has moments of genius throughout. Deeper and a LOT bleaker than The Simpsons - don't think that just because it's by Groening you're going to be getting "The Simpsons As Rabbits".

Some American staples now - beginning with The MAD Bathroom Companion: 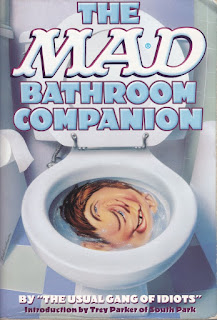 A paperback-sized, 288 page selection of goodies from MAD Magazine, spanning several decades. A lot of the stuff's dated (VHS tapes costing $79, many references to the Exxon Valdez oil spill), loads of the references are still lost on me (not so much a problem if you're American I'm guessing), and the introduction pages have Trey Parker talking about Jennifer Lopez's toilet habits... But for all that there's still plenty of good stuff in here - Don Martin, Sergio Aragones, Duck Ewing, Al Jaffee, John Caldwell, Jack Davis, Spy Vs. Spy - as an introduction to MAD, you can't go wrong with this one.

The Apex Treasury of Underground Comics is somewhat terrific... 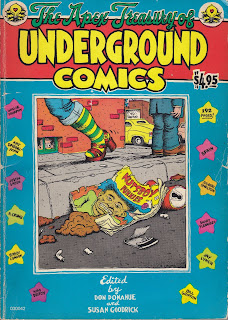 There's plenty in here from all the names you'd expect - R. Crumb, Art Spiegelman, Spain Rodriguez, Gilbert Shelton, Bill Griffith, Kim Deitch, Jay Lynch and Bobby London, whilst also finding room for the likes of Shary Flenniken, Willie Murphy and Justin Green. Besides having close to 200 pages of comics in here, what REALLY makes this book is the interviews - it was published in 1974, less than ten years after the likes of Zap Comix and Bijou Funnies caused such a ruckus. Turns out that 31-year-old Crumb is the same curmudgeonly bitter fogey that 73-year-old Crumb is, which is nice to know I suppose. 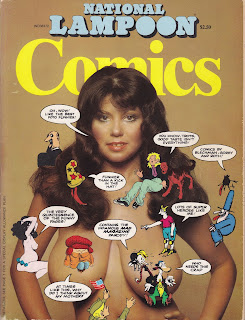 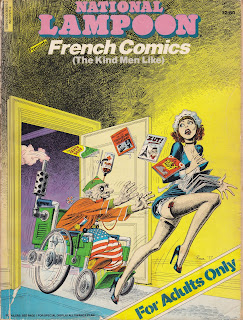 In the mid-seventies, Leonard Mogel was in Paris, looking to launch the French version of National Lampoon, and whilst there "discovered" Metal Hurlant, which was translated and brought to the USA in 1975 as Heavy Metal - mostly science fiction, fantasy and erotica in that one. National Lampoon Presents French Comics was published in 1977, and my guess is it's the stuff that the editors liked but that didn't fit the "feel" of Heavy Metal - so here we have lots of high quality French comics, fully translated, and all with that odd sense of humour you only get reading French comics. Featuring lots of single-named comics-folk, including Moebius, Dargaud, Loup, Copi, Buzzelli, Wolinski and so on, from the pages of Pilote, Fluide Glacial, Mormoil and others... If you can find this one, it'd be a good idea to BUY IT.

Similarly in an "international" sense, we have The Comics Journal Special Edition: Volume 5... 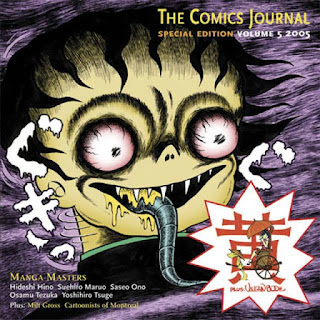 ANOTHER one that's too big for my scanner, so this one's nicked from Google.

Absolutely massive, this one - 200 pages with a LOT of variety. There's forty-odd pages on the history of Manga, and this book being published in 2005 we're talking a few years before that word conjured up images of hordes of squealing weeaboo types (there's twelve pages worth of Hideshi Hino amongst this lot, if you haven't read any of his horror comics, there's a chance you owe it to yourself to do so). There's also a 40-page feature on the life and work of Vaughn Bode, eight pages on Yiddish cartoonist Milt Gross, a feature on the Montreal comics scene, and 73 pages worth of comics on the theme of "seduction"... A mixed bag, but there's enough variety here for blah blah etcetera.

Back on home ground, there's a load of collections of Scottish comics from Braw Books... 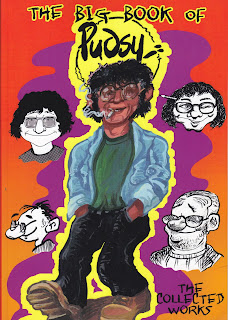 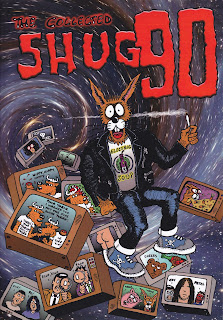 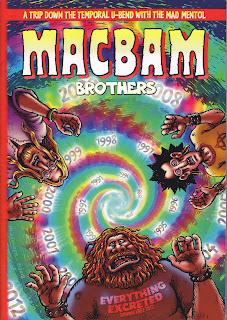 The Big Book of Pudsy is a career-spanning collection of the late Paddy Morris, taking in his comics from Oz, International Times, COZmic, Nasty Tales, Dope Fiend Funnies, Northern Lightz and so much more, with all sorts of biography pieces, clippings and sketches in there too. The Collected Shug 90 concerns twenty-odd years' worth of Hugh McKenna's comics for Electric Soup, Northern Lightz, Khaki Shorts and so on, with bonus pages from Frank Quitely and Dave Alexander, whilst Alexander himself has The Collected MacBam Brothers, Glasgow's answer to the Fabulous Furry Freak Brothers (and yet so much more!), also from the pages of Electric Soup and Northern Lightz. Comics-wise, there's not much funnier in this world than "For a Few Giros More".

Last of all, is something that's not exactly a book of comics but it still does the job - Almost Everything There Is To Know by Tim Hunkin: 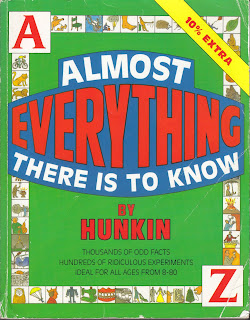 365 pages of illustrated information on pretty much everything, enough bits of trivia to last you until you're dead and plenty of genuinely funny stuff in there too - the section on "How to paint cows" still gets me twenty years after reading it for the first time. It even tells you how to read a barcode on the back cover: 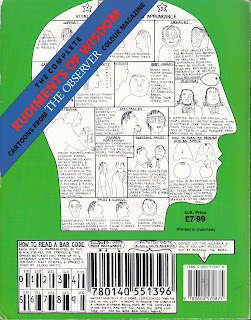