Now here's an interesting one - a race-based comic. Not as in who-can-run-fastest but as in the "race" term that separates folk by their country of origin. This one here's made by and for British folk of Jamaican descent, and it's... not that bad really. It's called Skank, by the way, and it's from 1994-ish. 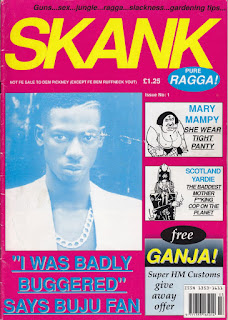 It's still bad, but nowhere near the levels of badness seen in Smut or Jockstrap. The covers don't do Skank many favours, mind - seeing these in a shop (or indeed, on my bedroom floor), you'd be forgiven for thinking they were a "different" kind of publication: 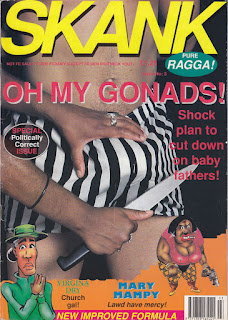 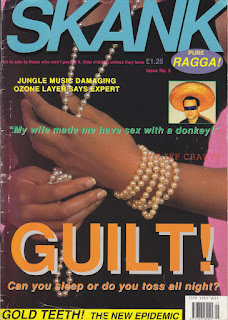 So, read on for humour based around drugs, violence, sex, homophobia, xenophobia, racial supremacy, rape, wife-beating and orally-satisfying cars, if that's your thing...

STRUCTURALLY, Skank's around two-thirds comic strips, and a third spoof newspaper/advert-type things, such as this jumble of double-entendres: 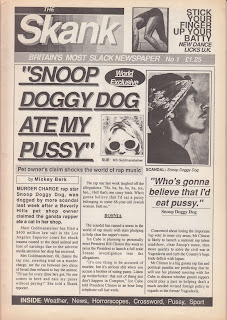 And this thing that had me chuckling a fair bit, because fake "before-and-after" pictures are always funny: 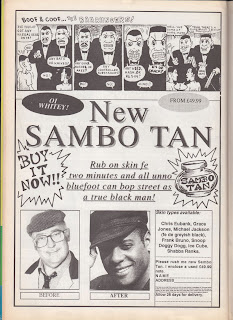 Onto the comic strips now, and for a change, they're mostly of a high quality, at least artistically (even if the stories don't make much sense). "Chief Rude Bwoy" Bob Joseph writes most of the strips, with a big heap of guest artists. They're mostly uncredited, at least not fully, which is a shame, because LOOK AT THIS: 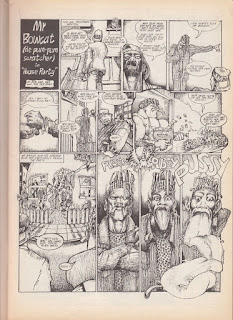 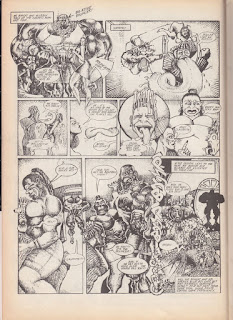 Bulging body-parts are a running visual theme throughout Skank, making most of it great to look at even if you don't find the strips all that funny. See the eyeballs at the end of Betty Rider by (possibly) Derrick Lewis: 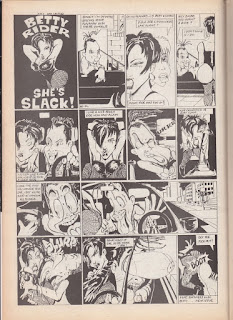 And then there's the swollen member of Gee Miah's BMW - guess what that stand for? 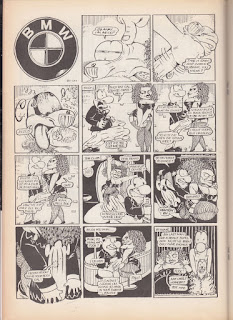 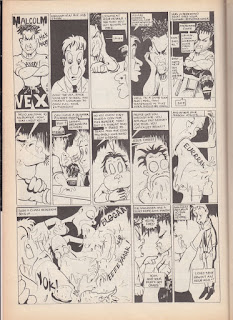 Or how about the bizarre Love Thy Neighbour - Jamaica Vs. Smallie, a bit like Ivor Lott & Tony Broke only it's all about physical stature in this one: 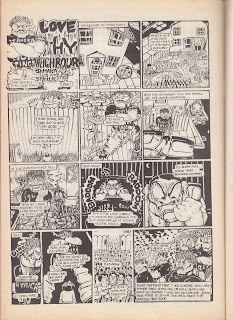 Elsewhere we have Black to Basics, which concerns former-PM John Major's Brixton upbringing: 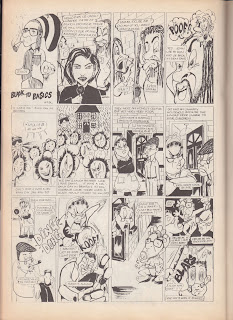 The issue-spanning, over-the-top serial The Fugitive is a good one, by Gary Portman (maybe?) - he's on the run for something he didn't do, or something like that. Anyway, strange things happen, as can be seen in this two-page epic from the third issue: 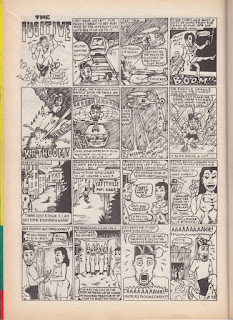 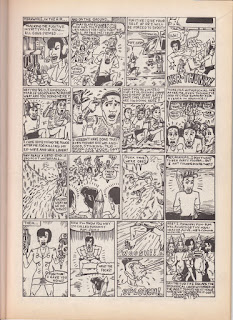 Mad Inventor by... Danny someone-or-other is formulaic but funny - each strip has your scientist man there inventing something ridiculous that turns out to be a runaway success, but then obvious flaws turn up and ruin his investors. Cue catchphrase: 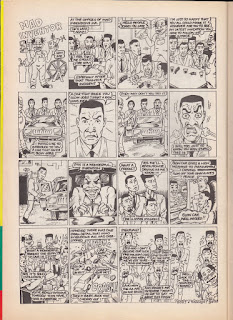 We also have the cleverly-titled Rachel Prejudice by Tyrone Lou, featuring the BNP Chemists: 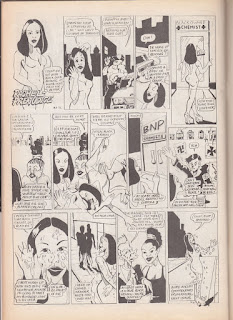 And the standard "rhyming-name" character, this one being Lucy Loop, She's Got to Have Her Scoop! - a news reporter who usually resorts to mass murder in order to secure the best stories for herself: 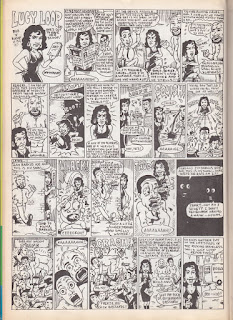 Skank even has its own version of the Fat Slags, this being the adventures of Mary Mampy and her mates, credited to "Bucky" (aka Daniel Francis): 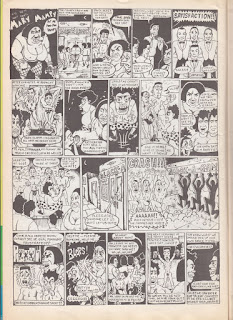 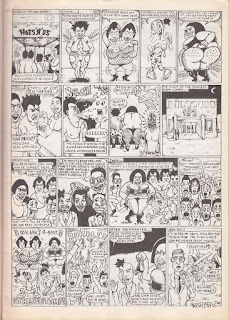 Then there's the classic trope of "stupid-white-people-who-wish-they-were-black", here exemplified by Wannabee Black by Tyrone Lou: 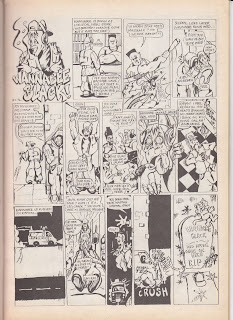 And White Galfriend by Gary Portman, who leaves her boyfriend in bandages by the end of each strip: 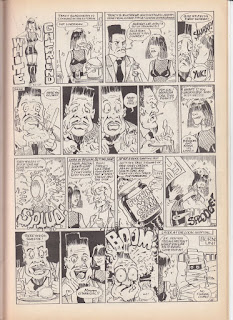 Obviously it's not all fun and games. For a start there's the slightly depressing Fagga Muffins: 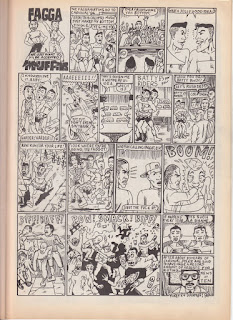 And there's also the inexplicable Vargina Dry - Church Gyali which has implied rape as its punchline: 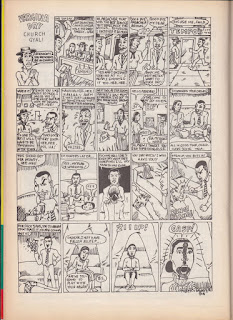 Elsewhere we can find strips that show Mr. Motivator hanging himself, OJ Simpson explaining how his wife and her boyfriend ended up covered in stab wounds, a prepubescent scamp attempting to seduce an older woman then getting beaten up for it, a voodoo priest tricking a woman into giving birth to a goat, and the adventures of an albino black man who resolves to covering his face with boot polish. For all its controversy, the folk at Skank seemed to have grown up a bit by the fifth issue, with the lighthearted tale of Single Mother, amongst the "unsung heroes of our age": 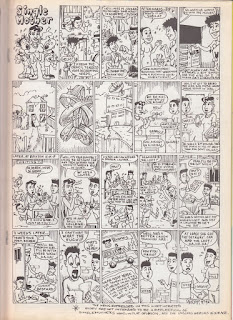 And even the usually ultra-violent Scotland Yardie ("Most man's worst nightmare - a Yardie wid a badge") goes all out to give a wife-beater the lesson he deserves: 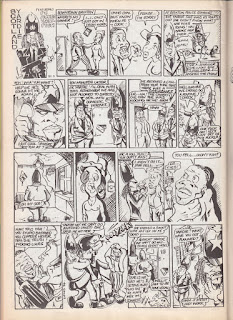 So, why the sudden change? Perhaps this statement appearing within that very same fifth issue explains things: 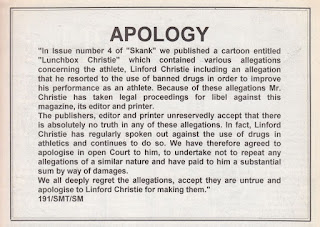 Yep, Skank got sued! Unfortunately I don't have the fourth issue with the Linford Christie "incident", but I'll stick it up here as soon as I find it. From reading this, and from the product description of The Worst of Skank, I'm guessing that the fifth issue was the last issue of Skank, with Bob Joseph and the rest of them simply not having the cash to survive the type of lawsuits that Private Eye has managed to pull itself out of over and over again.

Still, it was alright while it lasted.

A year and a week after this post went up, Vice did a feature on Skank and its follow-up, Black Eye, including an interview with founder/writer Bobby Joseph (and using some of my scans!). Interesting stuff, go and read it: HERE
Posted by TwoHeadedBoy at 6/07/2013 11:58:00 am