Getting Ziggy With It

A general warning before going any further - Ziggy may well be the most "offensive" out of the whole lot of the Viz clones. Within its pages is humour based around AIDS, cot death, child abuse, the IRA, racism, mental illness, genocide... Pretty much any "taboo" subject you can think of, Ziggy went there and rubbed it in your face until you were unable to think about anything else for days afterward. Vile and obscene and - in the right frame of mind - hilarious (in a childish sort of way). 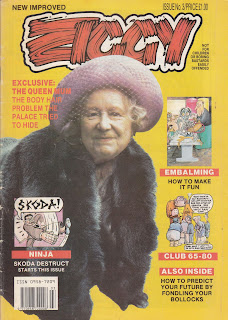 But there's bound to be some fun stuff in there too, so read on, if you're up for it.

Ziggy was around from 1990 to 1992 (ish), done mostly by one Stuart Blair, one of those people who seemed to enjoy seeing how far he could push someone before getting into trouble. This is mostly "achieved" through the news stories that make up around a third of each issue of Ziggy, with such headlines as:

-Simon Bates Is An IRA Informant

One such headline which I don't have access to, but is apparently what Ziggy got most of its exposure from was a story about Ann Diamond's cot death incident. Classy stuff. 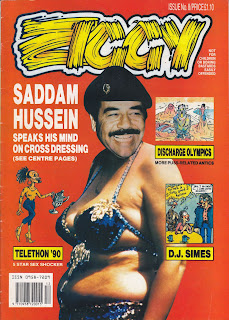 Celebrity deaths, natural disasters and terrorist attacks provide most of the material for the "Sick Jokes" page that was another Ziggy regular, whilst the rest of the magazine resembled a sub-gutter level MAD Magazine, filled with fake adverts: 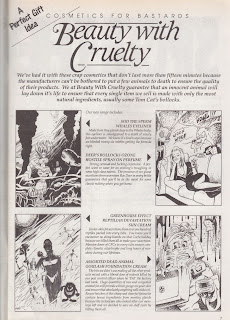 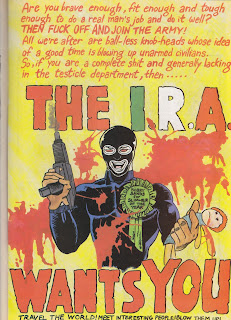 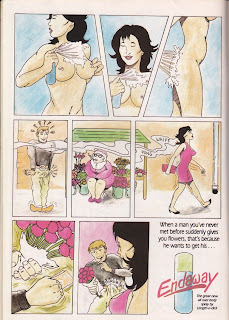 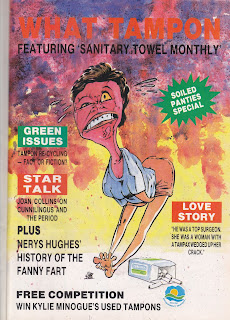 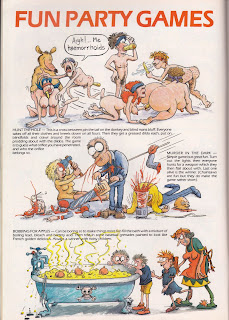 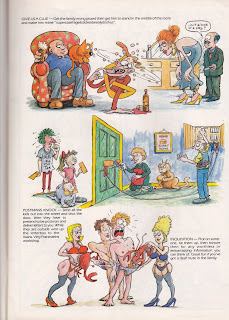 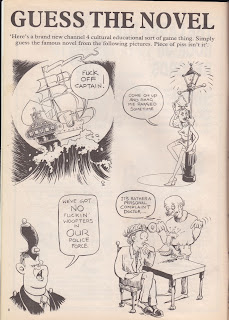 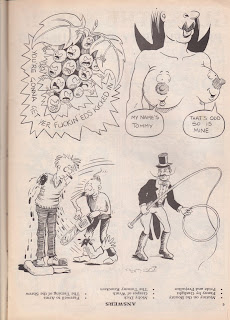 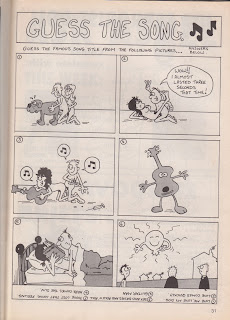 Is that by Charlie Brooker? Looks like, no credits though.

And odd little pieces, such as this detailing the events of the Discharge Olympics: 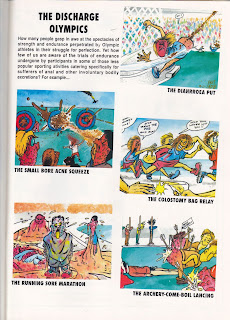 Apologies for the sloppy scanning on a lot of these pages, by the way - I really couldn't be bothered doing "justice" to this one.

What Ziggy excelled at was thinking up the most outrageous, insensitive things to say about anyone and everyone. A regular feature being 20 Things [someone] Has Never Denied. This is the Simon Bates entry in that series: 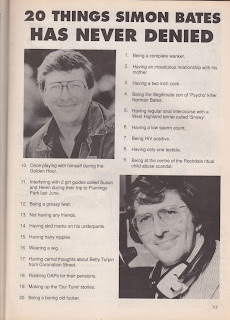 Another semi-regular feature is Telephon '90, in which numerous situations are proposed in the name of charity: 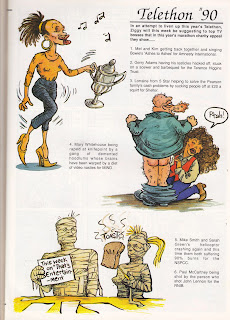 And then there's Wouldn't It Be Funny If, which is mostly just plain cruel: 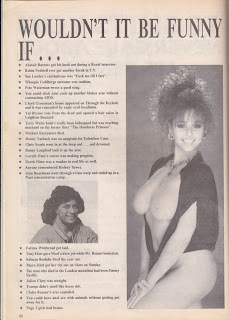 Pictures of topless women seem to be splashed around Ziggy at random.

Of course, there's comic strips as well. Even a few that follow the formula of having a character's name rhyme with their defining characteristic, such as Billy Bannel (He Turns Into a Flannel): 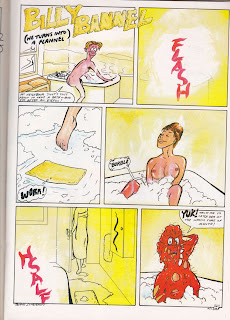 Fetch, the World's Most Confused Dog wouldn't seem out of place in any other comic, save for the odd bit of swearing:

The ever-present Nigel Maughan's here too: 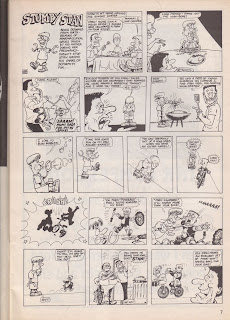 And here's Nick the Knicker-Sniffer, appearing in exactly the same way as he appears in Ziggy's "sister" title, Pulp, which will be looked at some other time: 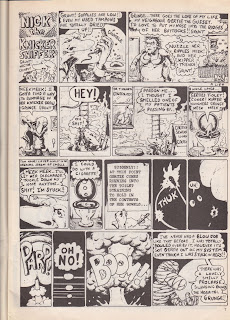 Ninja Skoda Destruct by Rob Yuppies (?) has your Chinese stereotypes on a mission to destroy every Skoda they can find: 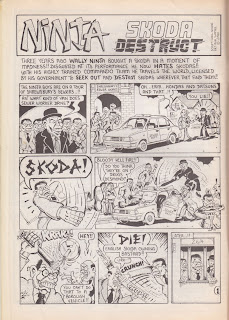 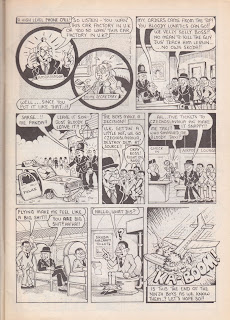 Note this: Even the Beano was still making "slitty-eyes" jokes in the mid-1990s.

This one looks like it was done by Charlie Brooker, but his name doesn't appear in the credits - who am I to tell? Seemingly the only "regular" comic strip concerned the adventures of the prostitute known as Camille Hump, by Jackie Smith: 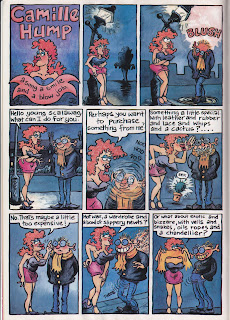 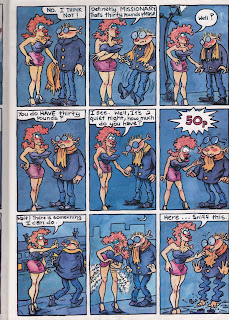 And of course, by law every "alternative" comic in the 1990s had to have at least one Rainbow parody: 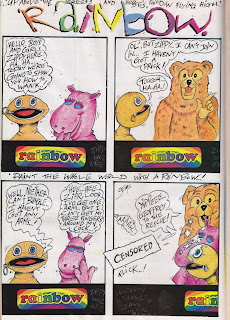 The parodies continue with this duet of Fleetway skits: 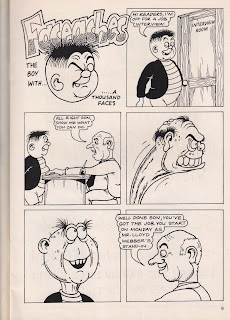 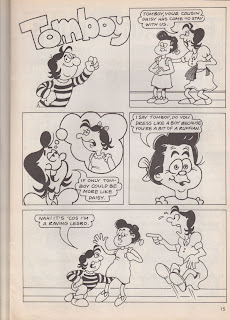 A sudden cameo from the pen of Jim Petrie in the penultimate panel?

And this one having a stab at Oor Wullie: 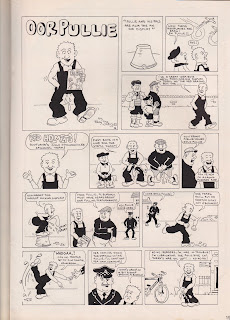 One final feature that sets Ziggy apart from the rest of its ilk is the pin-up in the middle of each issue, which places a well-known face on a different body. These range from the deranged: 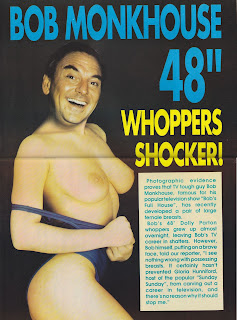 To the, frankly, highly disturbing: 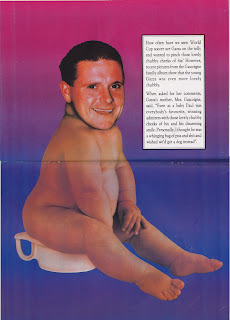