Adroit - "Clever or skillful in using the hands or mind", apparently.

"Hell's teeth, I only ever saw this once, when I was on holiday in Lowestoft! I always used to check out local newsagent's shops when I went on holiday and the only thing I remember about this was its title, so the contents couldn't have been that memorable."

Well I've found an issue of it, and it's certainly... different? 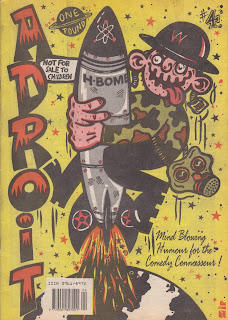 Straight away, the cover's different to the usual Viz-a-like "bunch of characters standing around swearing at each other", so it's a start. Let's see what's inside, yes?

This issue in particular's from 1991, and is credited to Neil MacAlpine, Phil Lipservice, Richard Withers, "Smudge", and a bunch of guest artists, and is "based" in Middlesborough. It starts out in a way I haven't seen in many other titles of this ilk - with an anti-war political comment! The first page gives a brief history of Kuwait, explains how the Gulf War could've been avoided had Britain not been so greedy in its Empirical days, and expresses its disgust at Holland lowering the age of consent to twelve.

After that, Adroit seems to bounce all over the place. From student rag-mag level cartooning: 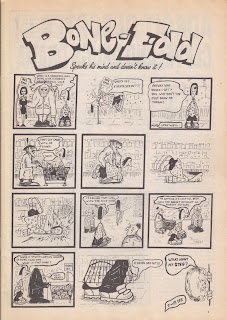 To standard/familiar Smut-style "nothing but swearing, violence and misogyny" rubbish: 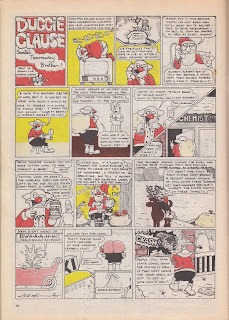 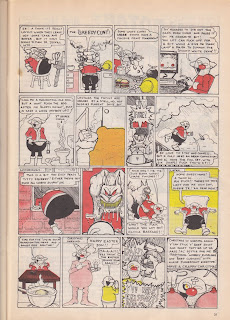 And then there's the fairly interesting Bert the Black Knight and Art the Snake by Mike Walker, akin to something more likely to appear in Knockabout or Prime Cuts: 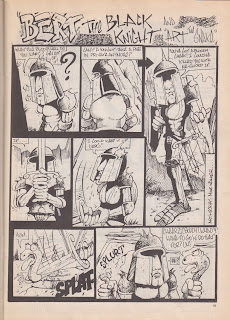 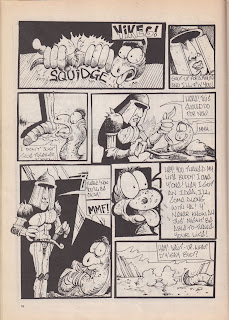 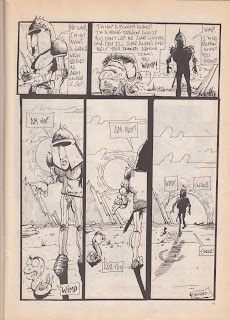 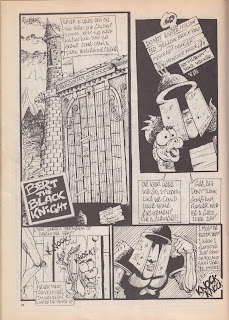 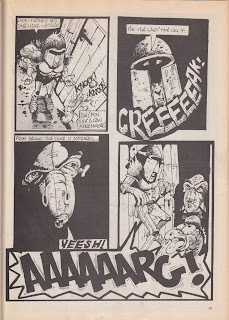 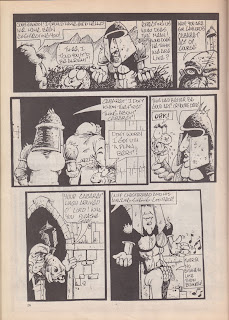 And from there it just gets stranger. We have scatological japes from Joe Hope's The Flies: 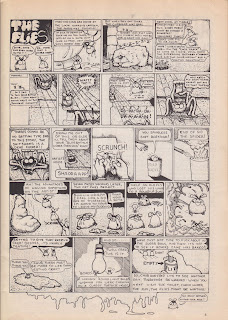 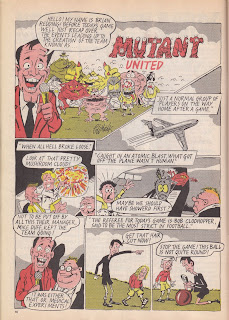 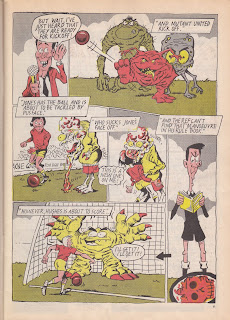 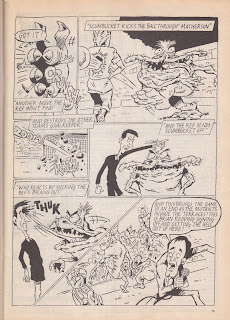 And a list-based article about how to identify peasants: 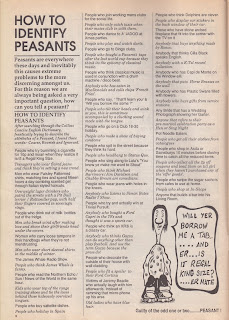 What's also "different" about Adroit is how text-heavy the whole thing is. There's no scans of these, as eye-strain's bad enough for most folk without having to read blurry words on a JPEG, but in summary there's:

-Children's Corner: The Jolly Nice Tale of Peter the Platypus, about a foul-mouthed, sexually charged platypus despairing about having to wade through acres of chicken shit.

-North-South Divide, a double-page autobiographical piece about the Adroit crew's experiences at a Christmas party held by Galaxy Publications in London, commenting on the "bigotted attitudes of ignorant Southerners". A fair few segments of this page are "censored due to legal advice". The epilogue of this piece states that "London is nothing more than a decrepit pile of filth that survives off the back of the North".

-Randy Decker, Private Eye is a lengthy parody of hard-boiled detective stories. Sample line: "I suppose I'll have to come clean". She managed to fool me again; I thought she'd already had a bath.

-Captain Rudolf, a strange tale and I honestly have no idea what's going on in this one. He's a randy sort, and that's about all I can figure out from it. The two pages of text are continued fifteen pages later in comic-strip form: 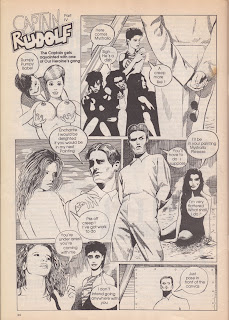 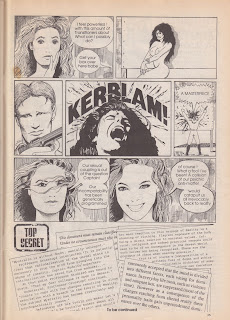 -Sam Rotary and his Transtemporal Y-Fronts, a time-travelling yarn in which the titular hero repeatedly tries to avoid meeting himself: "Immediately, my receriver was put back on the phone. I didn't want to be caught talking to myself, even if he was having a better time than I was."

The majority of these text stories are in a serial-form, so I'll have to be on the lookout for more issues of Adroit to see how some of them begin/finish.

One more text-heavy item is My Life and Observations, by Bernard the Has Been Tabloid Reporter. Fairly amusing besides a "me too!" dig at Jeremy Beadle. This one shares pages with comics by Paul Hitchman and Gary Whitlock (again), so here it is: 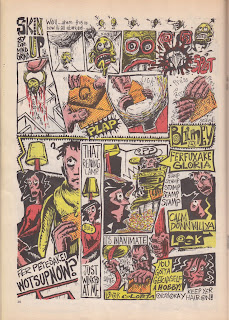 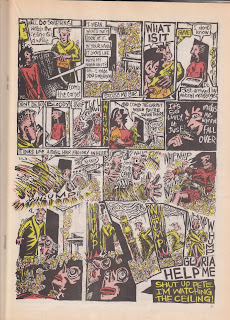 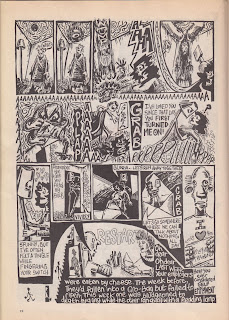 And just to "conclude" things, here's Gary Whitlock again, with that old comic standard of a rhyming character name. This time it's Mr. Delusion - He jumps to conclusions: 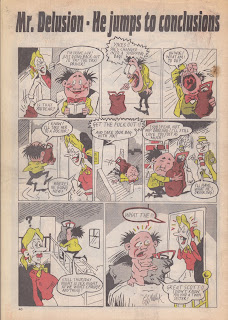 "Mind Blowing Humour" is what was promised on the cover. Maybe not mind-blowing, but certainly memorable, and definitely a comic I'll be trying to find more issues of.

The "head" of Adroit, Mr. Phil Lipservice, has got in touch via the comments pointing the way to what this Adroit thing is all about. So, in the spirit of any good university student, here's a straight copy-and-paste job from Wikipedia, makes for some interesting reading:


Adroitism was an underground comedy artform collaboration with its roots firmly embedded in Absurdist experimental cabaret performance.It also incorporated a national comedy comic full of cartoons, text and artwork. Based in the North East of England between 1989 to 1997 and a brain-child of the already established poet and comedian Phil Adroit (Philip. J. Lipkowitz). Phil continued solo performances, projects, research and installations up till 2001. Most notably, an "open graphic novel" text and image on canvas, shown at the Barbican Arts Centre in London as part of a display by the world renowned Dartington College of Arts in the late 90's.

At its height Adroitism employed over 200 regular and freelance artistes and collaborators of many creative styles, talents and skills including: comedians, writers, dancers, movement artists, drag artists, comedy actors, technicians, cartoonists, visual arts practitioners to name but a few. Phil Adroit often acted as an unofficial Agent for his artistes, helping them move onwards and upwards within this precarious industry.

The aim of Adroitism was to offer a platform for the more obscure, eccentric, experimental and educational arts practitioner, whether they be established professionals or exciting, off-the-wall amateurs. The aim was to experiment by mixing often opposing styles together in professional performances. Phil encouraged improvisation amongst his performers and the audience.

Although the Adroit Comedy Cabaret toured extensively, its followers were of the "cult" type. It existed strictly in the margins of the Arts and Culture Industry, prefering the shadows than the limelight. Saying that, Phil and other members of ADROIT have appeared on television, film and radio many times, usually under their absurd alter-ego's.

BRUTAL POETRY: A non-compromising, verbal choreography, socio-political performance format created and designed by Philip.J. Lipkowitz ( Phil Adroit ) in 1979 to entertain non-traditional poetry audiences. Phil specialised in following professional entertainers in the old Working Mens Clubs, sometimes to hostile crowds who regarded poetry as a class divisive tool to suppress the poor and working-class. It proved a valuable baptism of fire for the young Phil and became a hit for its comedic straight-to-the-point delivery and punch-lines.

Phil incorporated movement, sound, image and installation into some of his performances, but prefered the often satirical subject matter and its vitriolic delivery to stand on its own, sometimes provoking heated debates from members of the audience or management of the venue. Phil would use this platform to express notions of equality amongst the sexes, disabled and races (something which hadn't been established in British society or culture at the time ).

There are a few anthologies where Phils work has featured with other modern poets; however, he does not write for the page, unless that page is a living body, dead animal or unconventional environment.

The mainstream poetry establishment regarded Phil and his product more akin to stand-up comedy and refused to recognise him as a poet. Rather than deter him, Phil found a ready made audience amongst the working-class and underclass. It can be argued that Phil's BRUTAL POETRY style, vocal and physical choreography offers the audience a true feeling of performance in its traditional context.