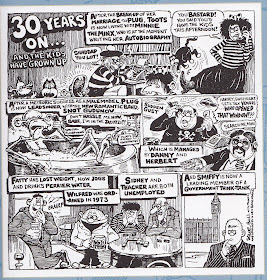 Viz can always be relied on for a bit of that satirical stuff that everyone loves. They've done various rips on the Dandy over the years, with such characters as Desperately Unfunny Dan, Wanker Watson and Corky the Twat appearing over the years. Beano characters have appeared less often - Wikipedia informs me of Little Plumber, but I haven't seen this one yet. One that appeared back in 2001 was Eminemis the Menace, and here it is:

Obviously, in the wake of Viz's success, a billion imitators popped up all over the place, filled with "alternative" humour. Fleetway had a go at an alternative comic for the youngsters, and Oink! was the result. It had its moments (a LOT of them, to be honest), but you know - outrage, rudeness etc. The full story's well-known but that's not what we're looking at today. They put out a couple of annuals during Oink!'s short life, and the 1988 book featured this thing: 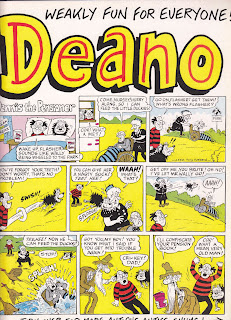 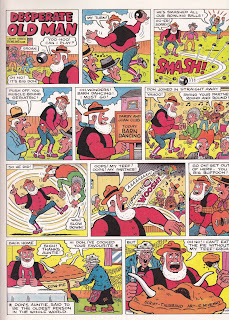 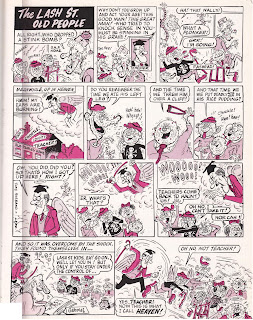 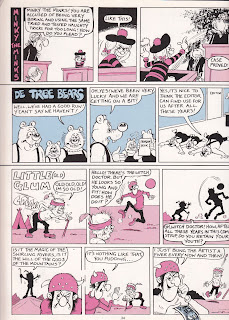 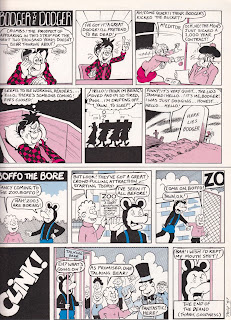 John Geering's there, proving he can draw just about anything that's given to him - but still, biting the hand that feeds him and all that. It's funny and all, and shows clear (and assumed) knowledge of the source material, yet it's also somewhat mean-spirited (a running joke in a lot of Oink! strips is being made to read the Deano as an ultimate punishment). The obvious joke here is that Oink! finished after 68 issues, whilst the "old hat" Beano is still around, 24 years after the death of Oink! Ho ho ho and chortle indeed!

Next up is a more recent example. A small-press mini-comic from 2011 by Jon Horner, it's Beanotown. Clever one this - he's taken the first chapter of Alan Moore's Watchmen and replaced the superheroes with Beano characters. So we have Les Pretend as Rorschach, Dennis the Menace as the Comedian, Walter the Softy as Nite Owl, Smiffy as Ozymandias, Billy Whizz as Doctor Manhatten and Ivy the Terrible as Silk Spectre. Here it is: 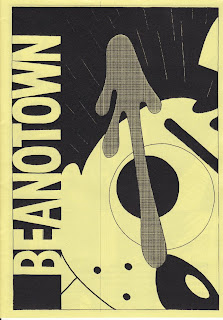 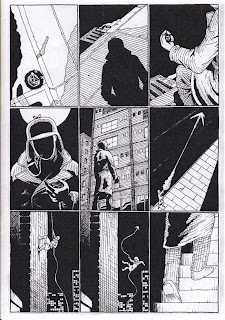 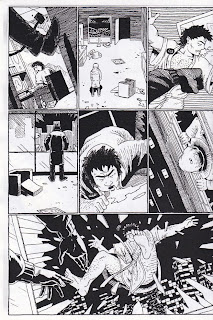 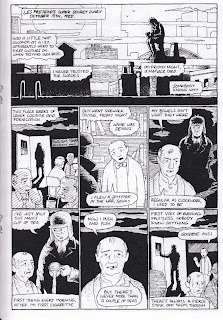 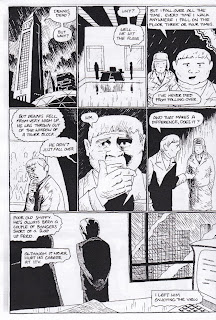 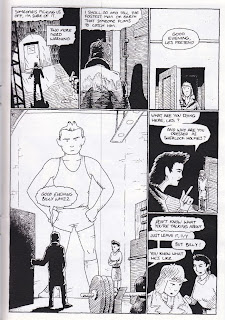 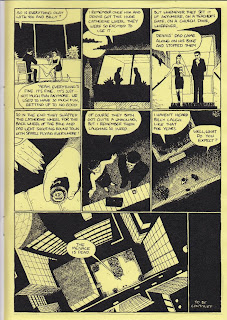 Will Jon carry on and do the entire Watchmen like this? It'd be impressive and ambitious, but I'm not too sure I'd like to see Walter and Ivy doing the nasty on a couch (or even Ivy and multiple Billy Whizzes for that matter). All in all this remains one of my all-time favourite small-press comics, and a lot of respect has been shown to both of its sources.

Saving the best till last (as is the best thing to usually do), we have this mini masterpiece from the 1968 Beano annual - self parody ahoy! The premise here is that the Bash Street Kids, fed up of school as usual, decide to go and work at the Beano offices. Upon their arrival, the staff all make a run for it, so it's down to the kids to produce that week's Beano. With Smiffy appointed as editor, things don't go exactly as planned, and the results of their work is a mixed-up mess of joy: 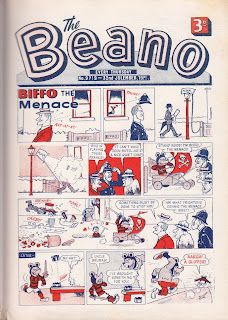 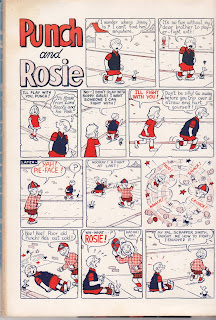 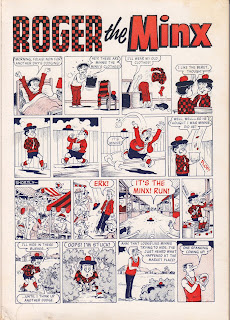 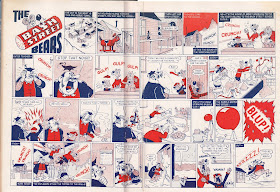 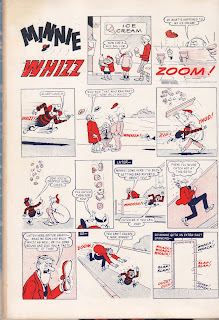 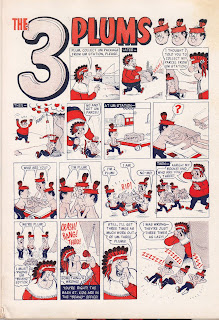 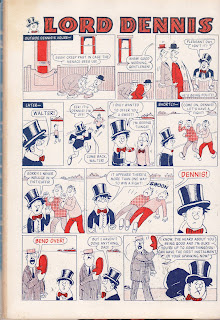 -An uncharacteristic Biffo taking on Dennis's traits, drawn by Dudley D. Watkins, marking a menace appearing on the Beano's cover six years before Dennis officially moved onto the front page.

-Dave Jenner's Punch (of Punch & Jimmy fame) being beaten up by one of Lord Snooty's pals.

-Roger the Dodger by Robert Nixon (right?) having some cross-dressing fun.

-The Bash Street Kids replaced by bears (I THINK this is done by Bob McGrath).

-Little Plum multiplied by three - surreal stuff by Ron Spencer. Love the bit where Chiefy calls the Beano office to inform them that something's wrong, only to hear the chaos that the Bash Street Kids are creating!

- And Davey Law's Dennis donning Snooty's top hat and acting like a lord. His sadistic dad STILL finds a reason to give the lad a slippering.

So, the moral of the story? There's nothing funnier than laughing at yourself perhaps? Maybe there isn't a moral, but it's always fun to take a different look at something so familiar.
TwoHeadedBoy at 11/03/2012 12:27:00 pm
Share